I wrote the code for the Golden Search algorithm in python for one of my university classes, I really found this method interesting, so I decided to replicate this method in a functional programming language (F#). You may not be familiarized with this method, so let me give you a little introduction.

The golden ratio is a special number approximately equal to 1.618, it appears many times in geometry, art, architecture, even nature and it appears also in other areas. 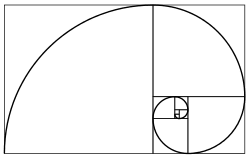 With that being said the Golden Search algorithm is an algorithm used for finding the extremum (minimum or maximum, in this case minimum) for unimodal functions by successively narrowing the range of values inside which the extremum is known to exist.
So the Goal is to program the method in F# for a unimodal function "f" which range is [a,b], with x1<x2.

We want to simplify the algorithm, so we evaluate in this intervals:

After that we evaluate x1 and x2 in our function f(x) which will give us the next to conditions:

First of all we have to understand that this function is recursive, which means we will be doing some part of the process repeatedly.

This is how we begin:

You can get the whole code with instructions on how to run it here.

The Golden Search it's an optimization method mostly used in solving mathematical and real life problems. Problems that can be solved by optimization are very common, here are some examples:

There are even some startups based on optimization algorithms:

Finally I want to end with my opinion on functional programming. It was very interesting learning the basics but it was a little hard to get used to, here are some cons I found:

But I also found some pros:

To conclude I really liked this experience but I'll probably not use functional programming again, because I like more object-oriented programming and have more experience with it.

Juan C LR
"Computers are like old testament gods, lots of rules and no mercy" - Joseph Campbell
Music Monday — What are you listening to? (Rock Edition 🤘)
#watercooler #music #discuss
The perfect open-sourcer does not exist
#opensource #beginners #github #productivity
Should developers study 20 hours a week after work?
#career

Once suspended, juanclr will not be able to comment or publish posts until their suspension is removed.

Once unsuspended, juanclr will be able to comment and publish posts again.

Once unpublished, all posts by juanclr will become hidden and only accessible to themselves.

If juanclr is not suspended, they can still re-publish their posts from their dashboard.

Once unpublished, this post will become invisible to the public and only accessible to Juan C LR.

Thanks for keeping DEV Community 👩‍💻👨‍💻 safe. Here is what you can do to flag juanclr:

Unflagging juanclr will restore default visibility to their posts.