Drag and drop is a common feature that many websites you interact with may have. While there are ways to do this with vanilla javascript, html, and css, it doesn't have to be that hard with React DnD. Here we will go through a super simple example of how to implement drag and drop functionality.

Once you have your react application set up, you will want to install React DnD as well as the backend which takes care of all the HTML drag and drop functionality behind the scenes.

Now that we have React DnD in our project packages, we will want to wrap the main component that is being rendered with a DndProvider. Be sure to import DndProvider and the Backend from the packages you just installed. Our HTML5Backend will be passed as a prop to the DndProvider component. 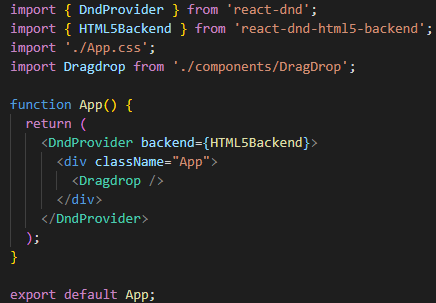 Next we will take a look at that Dragdrop component, which will render the interface for our drag and drop example.

The goal of this tutorial will be to drag images from one container to populate an initially empty drop board. We will start with an array of objects that will store our image urls attached to an id number. This will become important a little bit later when specifying what image we want to drop into our drop board.

Then to render our pictures, we will map over our list and send each individual picture to a separate Picture component. All the picture components we accumulate will be added to the initial box that images can be dragged from. 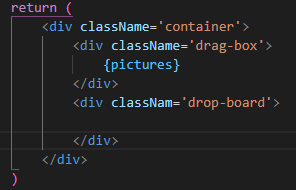 Now we'll take a look at our Picture component which is taking in the url and id as props from our list of images.

We want our pictures to be draggable, so this is where we will use the useDrag hook from React DnD.

Notice how useDrag is being initialized, with the object isDragging, and a ref drag. The useDrag hook is initialized with an object containing keys type, item, and collect. The type can be named arbitrarily, but we will soon see that our Drop hook will have to take the same type so it can receive the correct item. Our item will use the picture id so our app knows which picture has been selected to drag. Finally, React DnD looks for our user's action through monitor to determine if an item is currently being dragged or not. This response information is associated with the collect key.

Our final return for the Picture component will take in the drag ref and isDragging boolean so we can make some stylistic changes when the user is dragging an item.

Now that we can drag items, we need to have a place to drop them. Back in our Dragdrop component, we can use a state variable to hold an array of all the items we are dropping into the drop board. Then similarly to the useDrag hook, we will now use the useDrop hook to take our item and add it to our drop board.

Alternatively to drag, isOver and drop will now be used to see if the item is being held over a valid place to drop. The useDrop hook will look to accept the type that was specified in our draggable component. When the item is dropped over a valid section, the item will be added to the board state, filtering from the original list of pictures by the id that we gave the item. And again, to determine if the user is holding the item over a valid place to drop, the monitor will look to see if it is over a corresponding container.

Once we have the new updated board in state, we can render the picture again but this time in the new drop board. To make a new container where we can drop items, we need to add the drop ref. To visualize, we can again use isOver to change some styling about our drop container.

Now with a bit of styling to our components we can see the following when dragging one of the images over the drop board.

Once it is dropped, the board will have our new picture!

These are the css styles I used for this simple example: 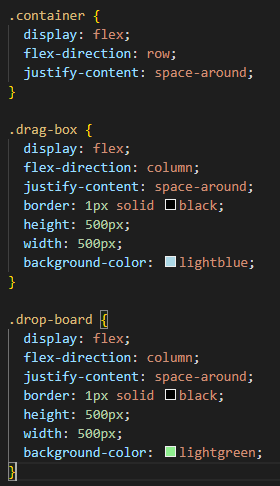 I would highly recommend taking a look at the official React DnD documentation where they give even further capabilities to this library.
https://react-dnd.github.io/react-dnd/about

If you're interested in the code used for this tutorial you can find the full repository here:
https://github.com/jyeett/dragdrop

Once suspended, jyeett will not be able to comment or publish posts until their suspension is removed.

Once unsuspended, jyeett will be able to comment and publish posts again.

Once unpublished, all posts by jyeett will become hidden and only accessible to themselves.

If jyeett is not suspended, they can still re-publish their posts from their dashboard.

Once unpublished, this post will become invisible to the public and only accessible to jyeett.

Thanks for keeping DEV Community 👩‍💻👨‍💻 safe. Here is what you can do to flag jyeett:

Unflagging jyeett will restore default visibility to their posts.