Due date: 23:59 p.m Oct 25th, 2021
The State of Quality Report 2021
Wouldn’t it be great to know how peers and experts are staying ahead of their quality assurance game? That’s why we're creating The State of Quality Report 2021 to collect the best QA practices from you, professionals of all levels.
We are happy to offer the first 100 respondents a $30 Amazon gift card, along with the final report from the survey results. Raise your voice!

Automation is a hot issue for businesses of all sizes, across all industries. Whether you work in IT or not, you’ve probably heard of automation as a method to save money, improve efficiency, and minimize errors. However, following automation, you may be wondering what action to take next, or if there are any obstacles that are restraining your DevOps teams.

How can you step up your automation game and achieve the ideal success of digital transformation? The answer to your question lies in this article.

What’s Holding Back Your DevOps Teams?

Let’s imagine a testing team with a streamlined automation process with suitable testing strategies and toolsets, with Becky working on the development team and James working on the operations team.

On a daily basis, Becky focuses on designing and implementing new software features and writing and testing software codes, while James focuses on managing and maintaining the IT infrastructure. Even though Becky and James have equal responsibilities for software deployment and support, they rarely contact one another since they work on different teams – or so-called siloed functions. Within silos, they are unable to create information transparency and mutual trust, which may result in mounting small errors, a higher risk of missing deadlines, and untidy procedures culminating in a loss of priorities and data ownership.

Automation alone is not enough. The workflow between Dev and Ops must be orchestrated to reduce siloed functions among teams.

What exactly "DevOps Orchestration" is?

DevOps orchestration is the automation of numerous processes that run concurrently in order to reduce production issues and time to market, while automation is the capacity to do a job or a series of procedures to finish an individual task repeatedly.

Automation can be pretty complicated at scale, although it is usually focused on a particular operation to fulfill a goal, such as a server deployment. When automation has reached its limitations, that’s when orchestration comes into play.

Why Invest in DevOps Orchestration?

DevOps teams must navigate across departments, requiring a solution where their tools can also be piloted smartly. This situation calls for DevOps orchestration solutions, which have the ability to combine numerous automated elements from different DevOps toolkits.

With DevOps orchestration, teams can utilize their current in-use automation tools while being able to engage under an overarching umbrella designed to pull everything into a single workflow. 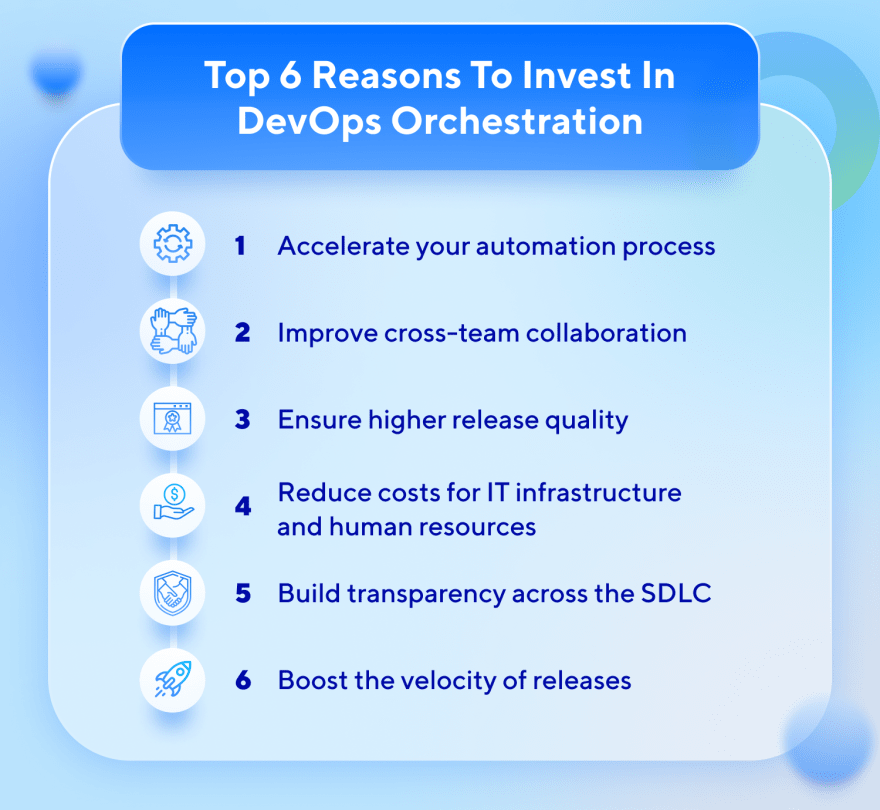 DevOps orchestration ensures seamless and quick delivery of new builds into production and minimizes the effort spent on repetitive tasks. As a consequence, DevOps teams can focus on more critical projects and decision-making rather than building pipelines.

Having a platform where all activities are consolidated and updated constantly boosts effective communication between operation and development teams, with everyone in sync throughout all steps.

DevOps orchestration lowers the chance of mistakes reaching the end-user by including quality control activities such as approvals, scheduling, security testing, and automatic status reporting.

4. Reduce costs for IT infrastructure and human resources

DevOps orchestration lowers infrastructure investment costs and the number of IT employees required. In the long run, firms can expand their cloud service footprint and be more flexible in allocating business costs.

5. Build transparency across the SDLC

It isn’t easy to establish clarity and openness throughout a project when tasks and information are siloed. DevOps orchestration is used to coordinate all tasks, centralize data related to all operations, and provide updates and progress to key stakeholders throughout the development lifecycle.

6. Boost the velocity of releases

DevOps orchestration entails considerable automation and the automated progression of software through certain processes – such as testing – and on to the next stage of a release pipeline. As DevOps orchestration removes the time spent waiting for another employee to finish manual duties and send the program to the next step in the process, software reaches the end-user faster, and wait time is diverted to the next project at hand. With a higher level of automation, you can now develop more services and get them to market more quickly, resulting in cost savings and revenue gains.

Let’s return to the scenario of Becky and James and observe how DevOps orchestration can swiftly bring drastic changes to their teams, both vertically and horizontally.
Thanks to an orchestrated system where everyone across teams is in sync, Becky and James can eliminate the existing silos and communicate better about all release activities in one centralized dashboard, thus performing faster troubleshooting and restoration to make crucial decisions, even in the toughest situations. Becky from the development team can encapsulate runnable programs into separate parts for easier testing and faster upgrades, thus focusing more on innovation instead of spending too much effort on deployment.
Moreover, James from the operations team no longer needs to worry about continuous follow-ups, as DevOps orchestration manages all execution infrastructure and scalability through its predefined configurations and serverless monitoring system.

Knowing DevOps team struggles like the palm of our hands, we have developed an ultimate solution for you: Katalon TestOps – an open and comprehensive orchestration platform that gives testing and DevOps teams full visibility of their tests, resources, and environments; and orchestration tools to manage tests and quality insights.

TestOps levels up your automation game through:

TestOps manages the entire process from test generation, management, planning, execution to reporting, ensuring consistency and accuracy for your builds

TestOps provides insightful reports for quality, coverage analysis, test flakiness, and dashboards to report on the metrics that are most important to your business

nginx with brotli support on Centos 6