Hi All,this is my 3rd blog.Really enjoying sharing my learning
through these blogs.This is my first blog where
I am covering a purely technical topic!

Javascript works very differently than many other programming languages.
In certain aspects it works completely different than any other languages!.There are many typical concepts in JS and 'Hoisting' is just one of them.Here in this blog I have talked about
how JS works in depth and what hoisting exactly is!

Before we move on to 'hoisting',let us first understand what JS Execution Context is.
I am sure many people are not aware of what it is.
As a matter of fact,I did'nt know that such a thing existed until
a few days back!!

Let us see with a visual aid what this means. 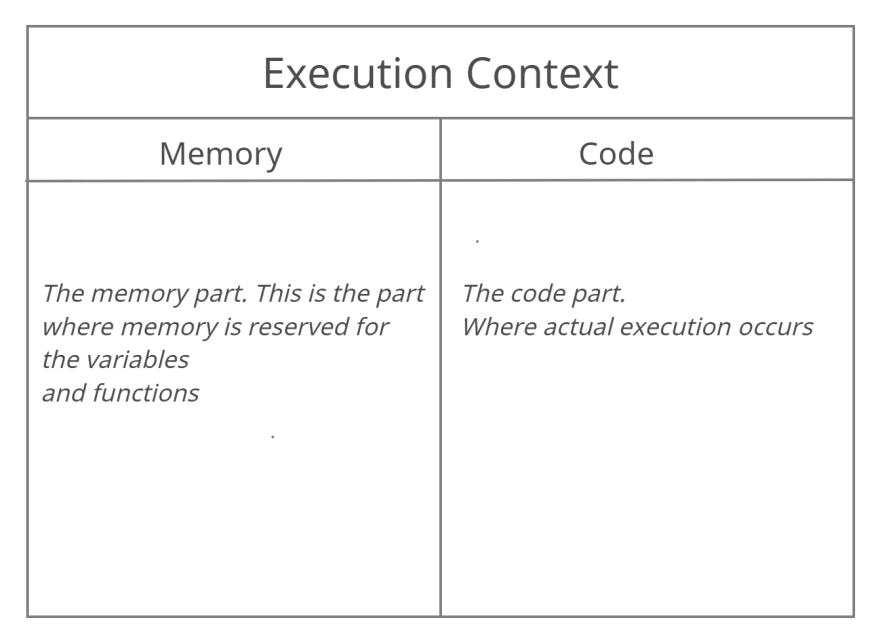 In the memory creation phase,memory is allocated to the variables and functions.In case of variables 'undefined' is allocated and in case of functions,the whole function definition itself.Refer to the below code snippet. 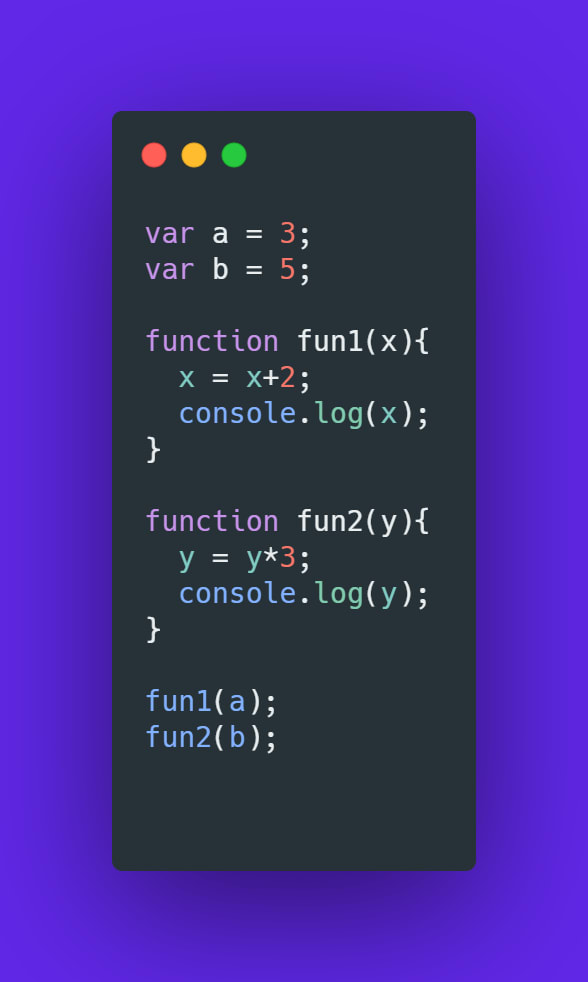 What happens even before the above program starts executing?Well this is the state of the execution context before program execution. 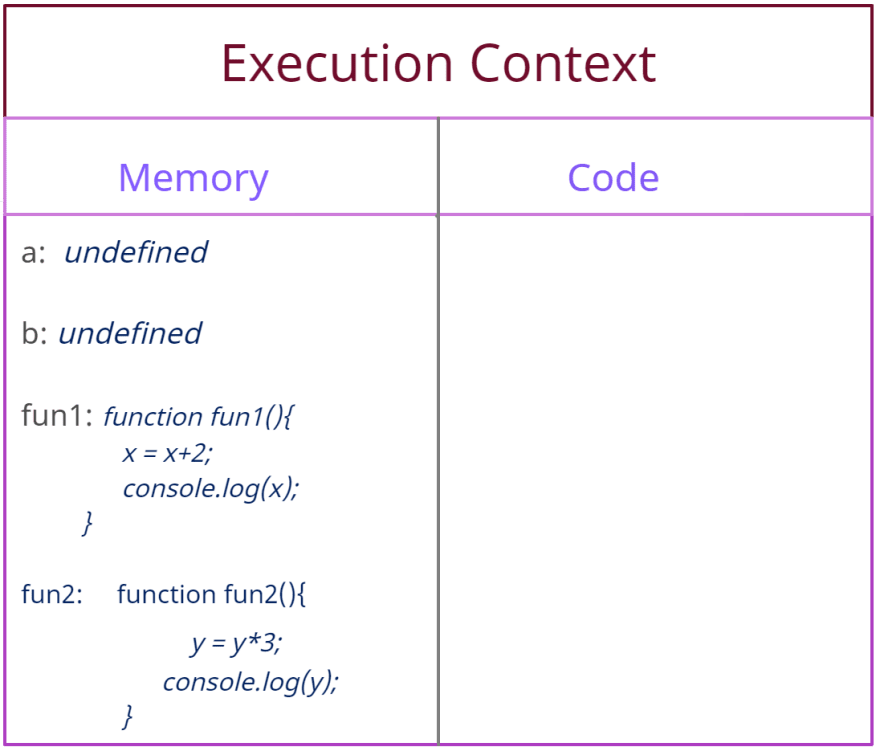 As discussed the variables 'a' and 'b' are assigned 'undefined'(which may be regarded as a placeholder) and the 2 functions fun1() and fun2() are assigned their own function definition only.All this happens in the memory creation phase.

As in global execution context,here also memory gets allocated for the local variables,parameters belonging to each function.If any nested function is present then the whole function definition is assigned to that particular function.

Let's see what happens next.This is getting interesting already!

The functions were called with arguments(a & b).So at first 'undefined' was stored in place of 'x' and 'y',but in the next step the actual value gets allocated as shown below. 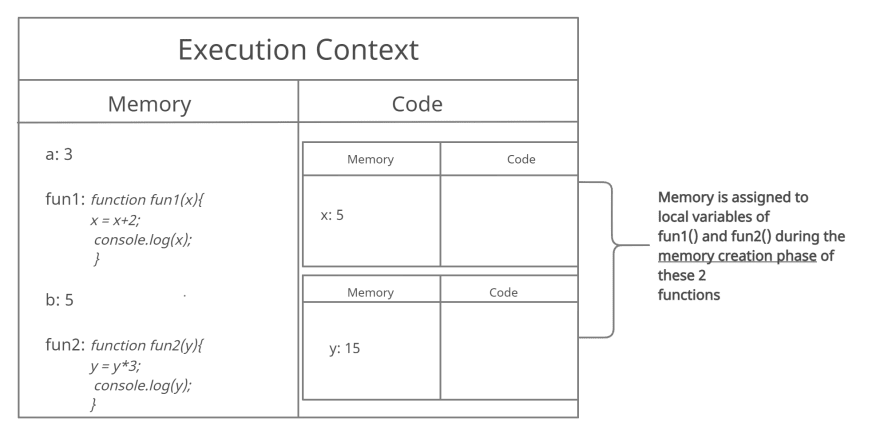 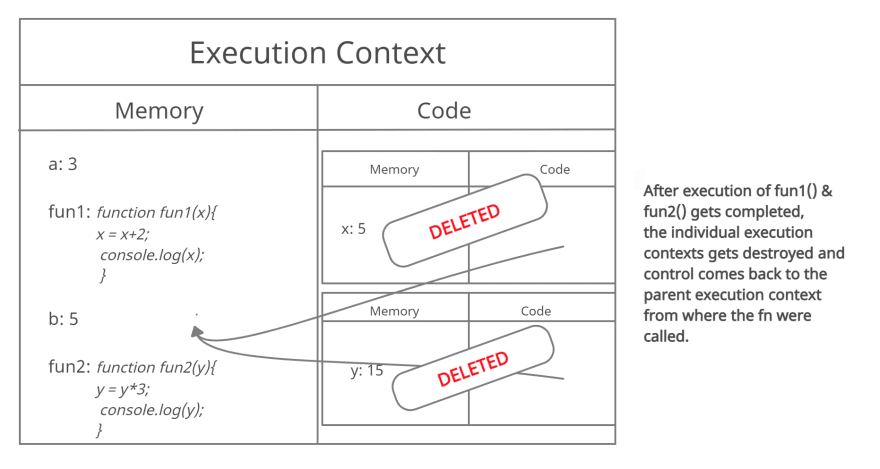 Finally at the very end after program finished execution,the global execution context itself is destroyed and popped out from the call stack. 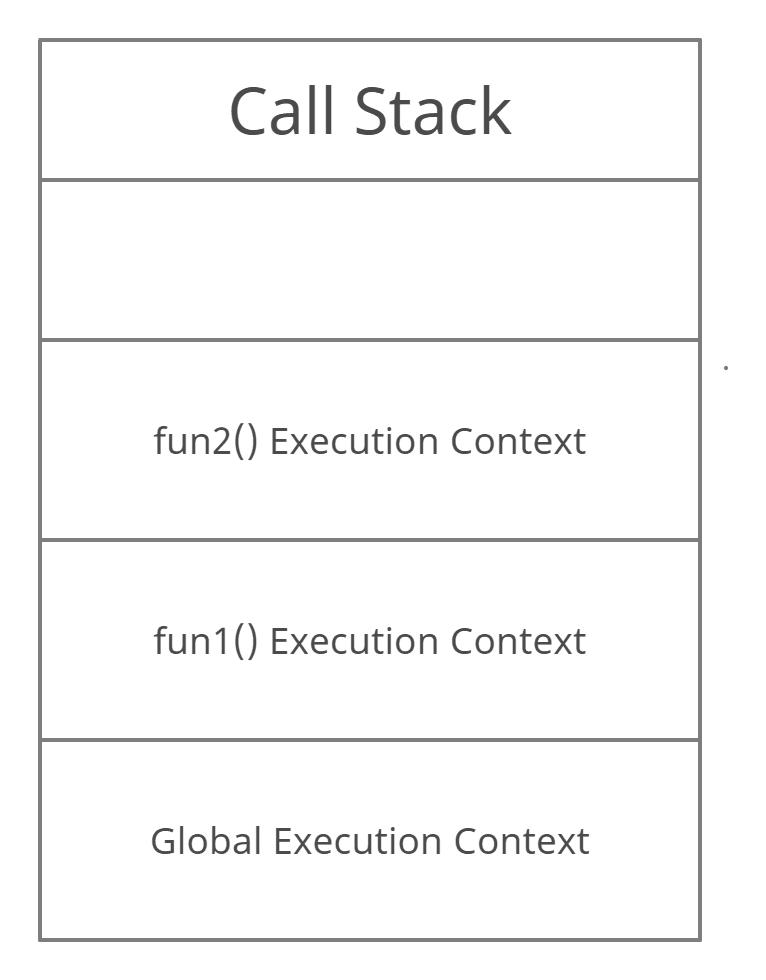 This was all about the execution context.I know it's quite a lot at first but it is important to know before jumping into 'hoisting'.

Now that we have seen what Execution Context is,let's deep dive into hoisting in JS.There is a common misconception that hoisting means variables are moved at the top of the program or something.This is not true! Nothing gets moved to the top/bottom by JS!! It's all the magic of execution context!! 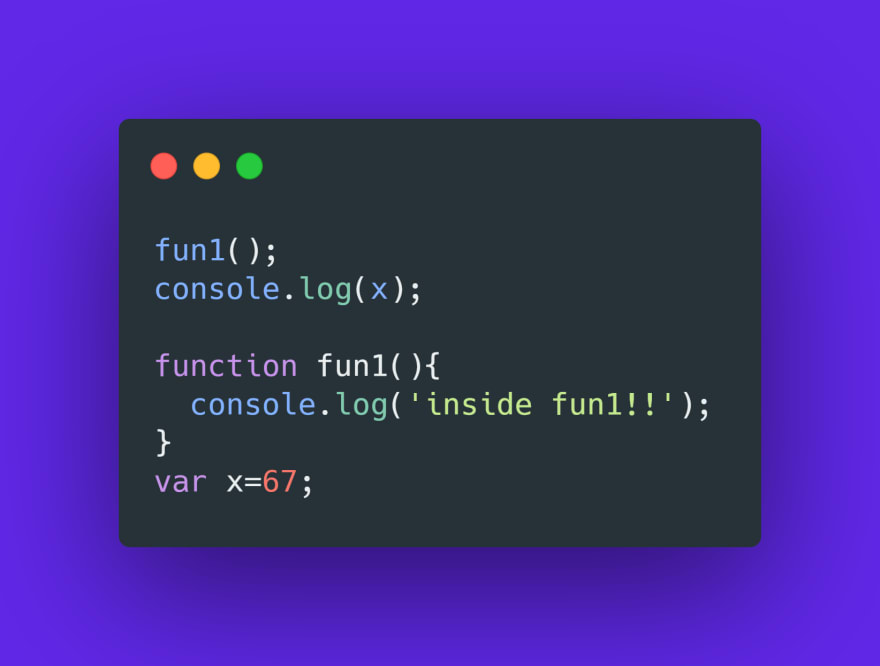 Refer to the above code snippet.What do you think will be the output?
.
.
.
.
Surprise! Surprise! The output is:

Now why is that you may be wondering,well if you remember our good old friend execution context,even before the program starts execution, fun1() is assigned it's function definition and variable 'x' is assigned 'undefined'.So when fun1() gets called before initialization,it works perfectly....but printing 'x' gives 'undefined'.

Let's see another scenario...can you guess what happens in this case? 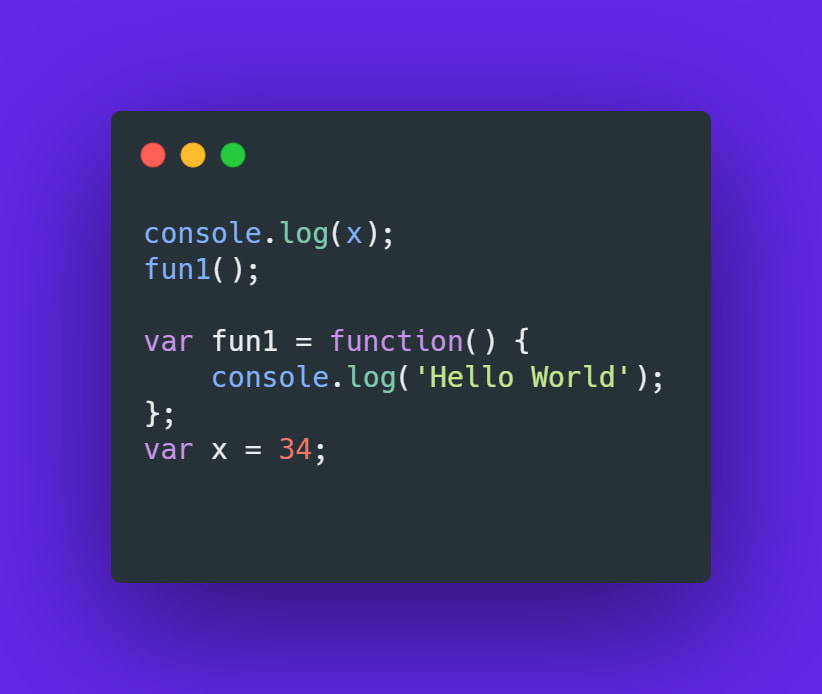 Well it prints 'undefined' for 'x' but then when fun1() is called it throws 'TypeError'.This is because fun1 here acts like a variable only and thus initialized 'undefined' just like 'x'.

This is it! yes,this is only hoisting.All you have to understand is the execution context and that's all!!

Well, you might now say that hoisting does not work on all JS objects.Like,'let' and 'const' are not hoisted.Well,that is somewhat true and there is a reason behind that.

Let vs Var vs Const

As many of us know,there are three types of JS variables(let,var & const).
While 'var' was there from beginning, 'let' and 'const' were introduced few years back to avoid this issue of hoisting. 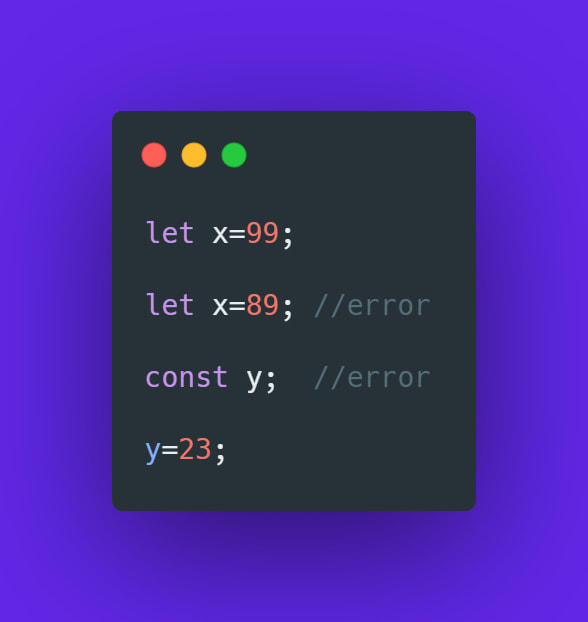 Hoisting in 'let' and 'const'

Since 'let' and 'const' are present in a different scope alltogether,hoisting does not work in a similar way like with 'var' variables. 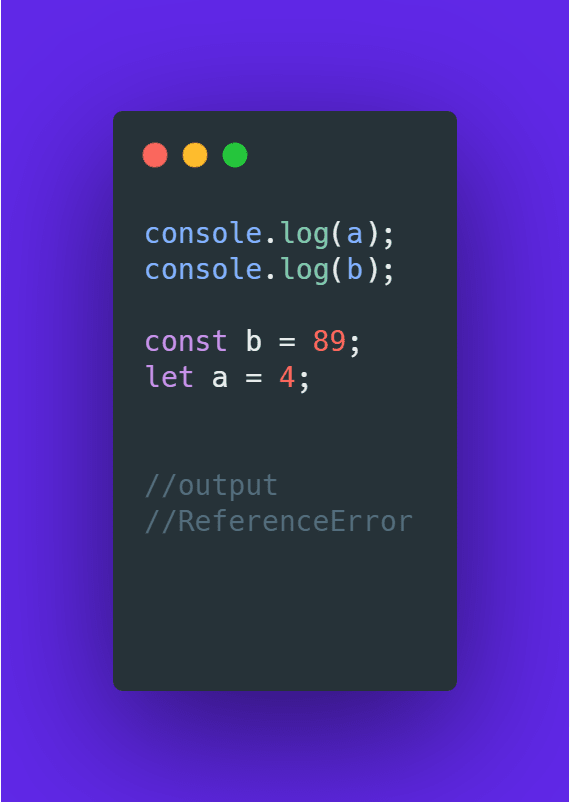 Why does this happen?Well here also both 'a' and 'b' are assigned 'undefined' in the execution context.But since both are being accessed before initialization,they result in ReferenceError.

But with 'var' it was giving 'undefined' right? Not any 'ReferenceError'!

Yes,and that's because for the time between the declaration of 'let' and 'const' variables till the time they get initialized,they are in so called 'Temporal Dead Zone' and thus inaccessible.As a result when we try to access these
during temporal dead zone,it results in the famous 'ReferenceError'.

It's always a good practice to keep your initializations at the very top of your program to avoid any unforeseen error.

Wow!! This was heavy!!😅 haha!! I hope it was helpfull to some extent.When I first learnt 'hoisting' I learned it in a very wrong way.Don't want anyone to face the same! Just remember nothing gets hoisted to the top or anywhere!! It is just the execution context.

Hope you liked this.In my next blog I will try to cover another important concept in JS.Until then goodbye and thank you for taking the time to read!😊

How to record webcam video and audio using ffmpeg

Kaustav Banerjee
A software engineer by the day who likes to build stuffs and takes a keen interest in frontend technologies.
Beginners guide to programming
#programming #coding #beginners

Once suspended, kaustav1810 will not be able to comment or publish posts until their suspension is removed.

Once unsuspended, kaustav1810 will be able to comment and publish posts again.

Once unpublished, all posts by kaustav1810 will become hidden and only accessible to themselves.

If kaustav1810 is not suspended, they can still re-publish their posts from their dashboard.

Once unpublished, this post will become invisible to the public and only accessible to Kaustav Banerjee.

Thanks for keeping DEV Community 👩‍💻👨‍💻 safe. Here is what you can do to flag kaustav1810:

Unflagging kaustav1810 will restore default visibility to their posts.