Now my account has access to Github Actions beta so I am trying to use it for syntax check and run ansible-lint for my Ansible playbook repository.
This article is based on the specification of Github Actions on 7th Sep 2019.

I referred to the official doc for setting up.
https://help.github.com/en/categories/automating-your-workflow-with-github-actions

Until the first run

This time I use my repository which has Ansible Playbook to set up my MacBook. 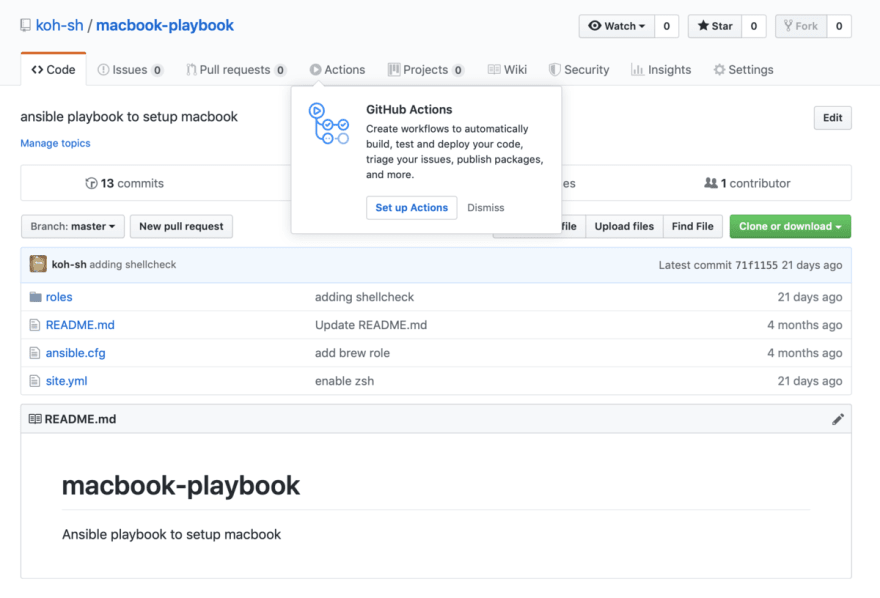 You can use many templates of workflow provided by Github and I am using python package.
After clicking the template, you can modify the workflow template for your repo.
I edited the file like below. (I also changed the name of the file too)

The Playbook is for macOS, so I changed runs-on to macOS-latest.

Below tasks are supposed to run.

After committing this file, tests were run automatically.

You can see the result at Actions tab. 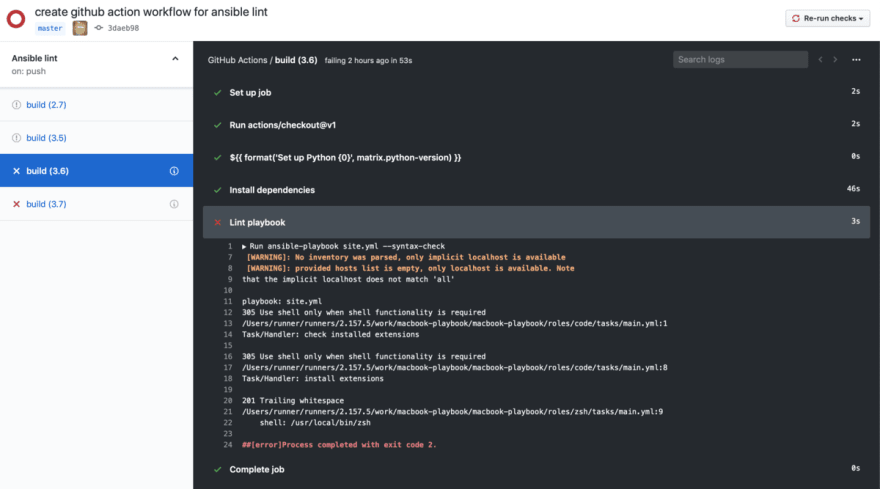 The number of python-version is 4 and max-parallel is 4 too so 4 tests were run concurrently.
You can refer to the official doc about the limit of resources.
https://help.github.com/en/articles/workflow-syntax-for-github-actions#usage-limits

You can click each version of builds for details.
This time ansible-lint threw some errors so the status is failed.

ansible-lint threw errors so fixing with this commit.
Removing trailing space and omit the error about shell modules with .ansible-lint file as I needed them.

I pushed to the master branch and the tests run automatically. 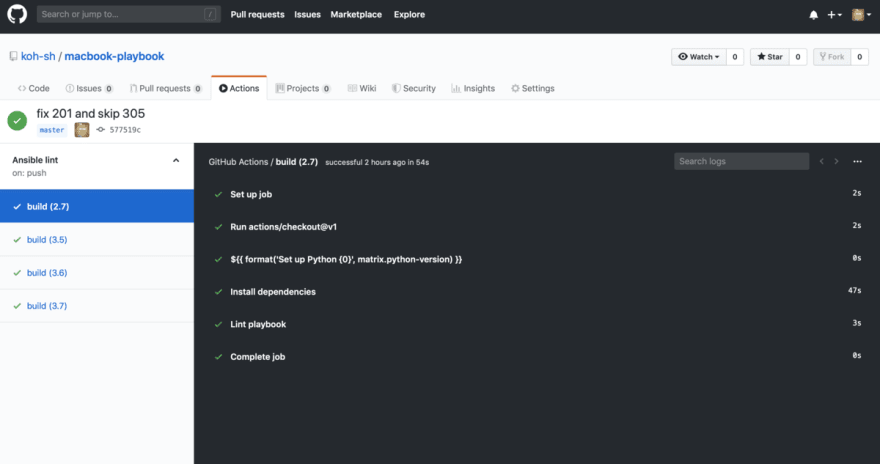 Tests are completed without problems.

Also, you can see the results of tests for each commit with symbols.

How about pull requests?
Let's see how they work. 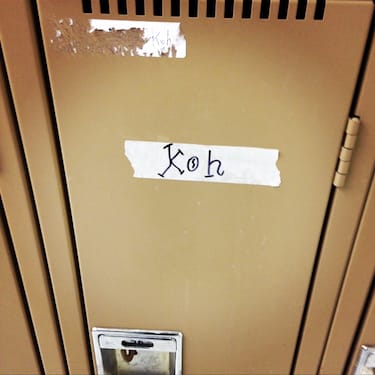 This is test PR to trigger Github actions test

By opening a pull request, tests run automatically and the results are available at PR summary. 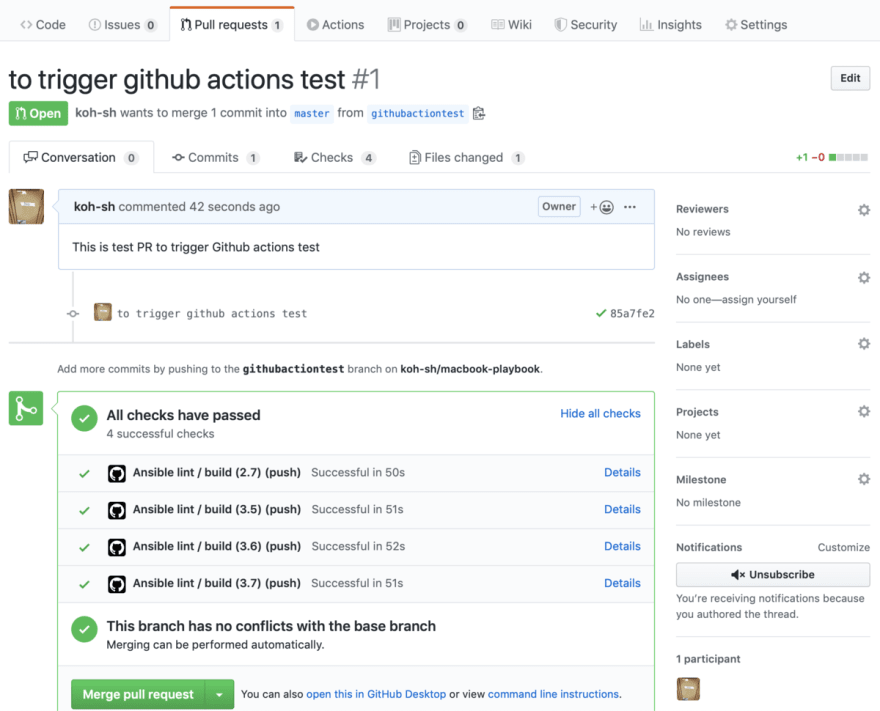 And this repository is integrated into my slack workspace and the result was notified too.
https://slack.github.com 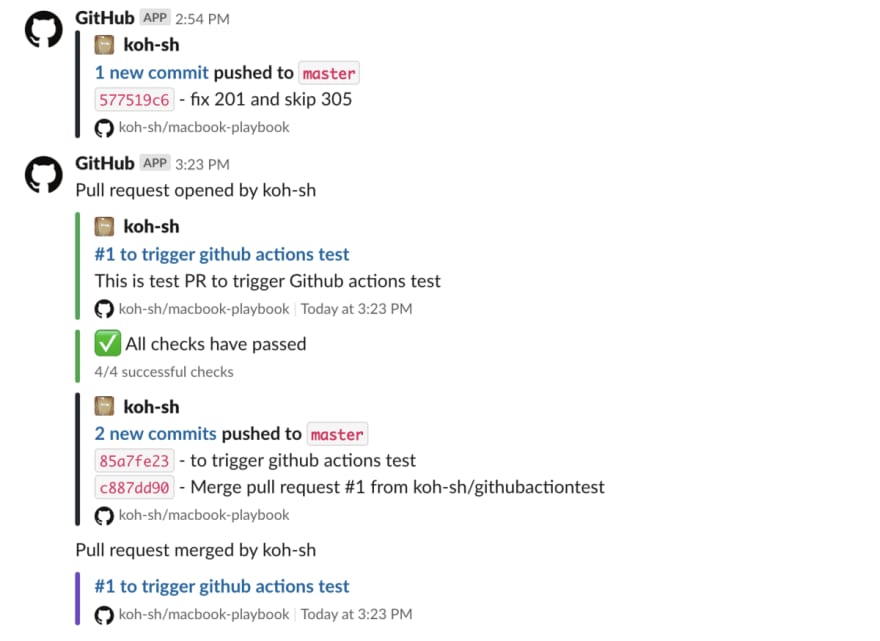 But when I pushed to master, the test result was not notified.
Another setting might be necessary but I haven't checked yet.

Testing with multiple version of Ansible

I modified the workflow file as below.

After a push, the test setting was updated and run as I intended. 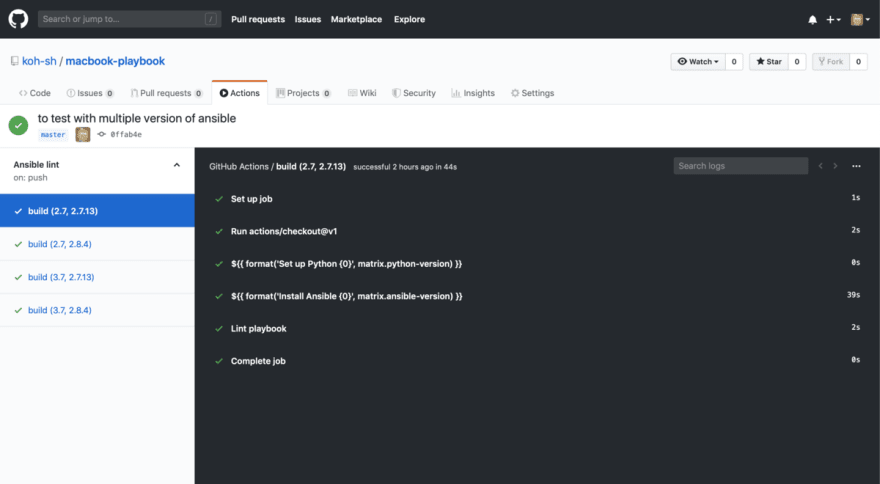 With Github Actions, I can ansible-lint automatically for each commit.
All of the settings in this article took only 1 hour since these are very simple and easy to use.
Also, Github Actions are available not only tests but also deploys too so I will keep trying them out.

Can beginners make a simple but meaningful contribution? Some unconventional advice #hacktoberfest

Once suspended, koh_sh will not be able to comment or publish posts until their suspension is removed.

Once unsuspended, koh_sh will be able to comment and publish posts again.

Once unpublished, all posts by koh_sh will become hidden and only accessible to themselves.

If koh_sh is not suspended, they can still re-publish their posts from their dashboard.

Once unpublished, this post will become invisible to the public and only accessible to koh-sh.

Thanks for keeping DEV Community 👩‍💻👨‍💻 safe. Here is what you can do to flag koh_sh:

Unflagging koh_sh will restore default visibility to their posts.