It's a dark Monday morning here and Mashable made sure it's even darker for the people who they reached through their ads. 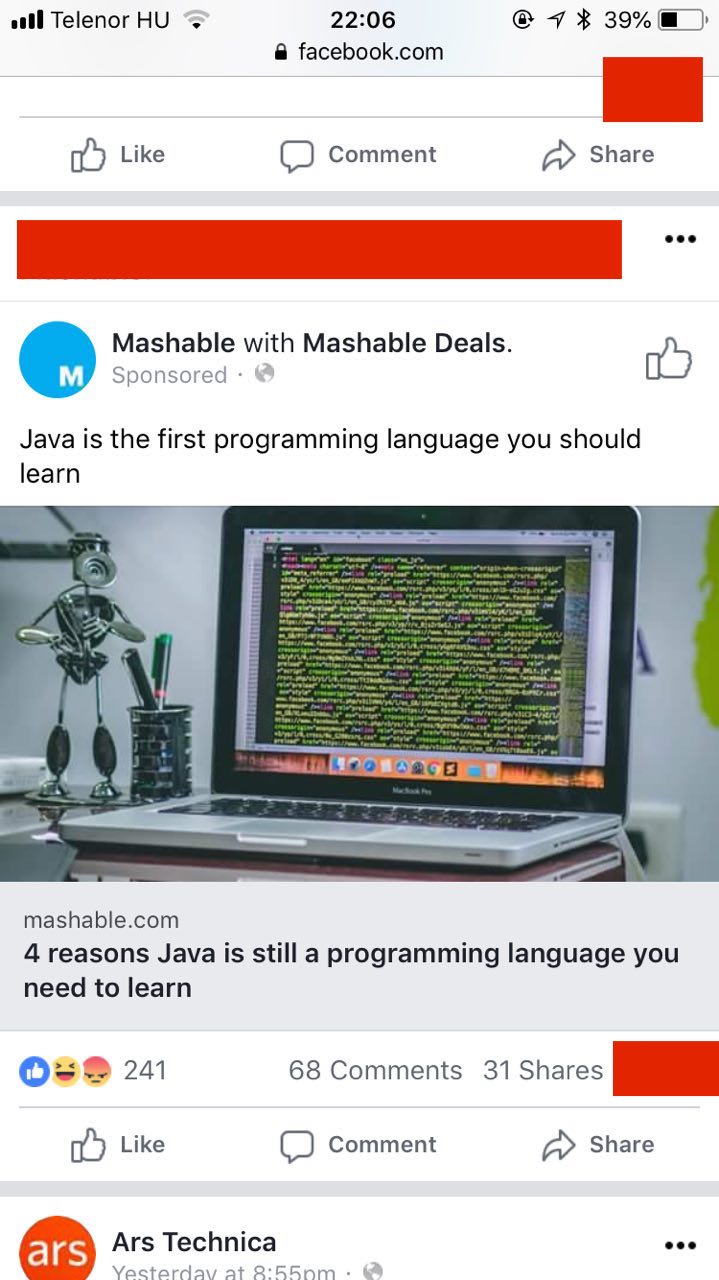 There's nothing wrong with this so far. Don't get me wrong, I'm not a Java hater who wants to point out fallacies concerning Java but the fact that when you navigate to the article, the title changes to "4 reasons Javascript is still a programming language you need to learn" already raised my level of nervousness about it.

So I kept reading on..

The first paragraph tells me what happened in 1995 when JavaScript first appeared. That's alright, nothing wrong with it, except I'm not sure how Hillary Clinton being first lady correlates to JavaScript coming out.

Let's skip to the first sub title though: "1. Java's where the money's at"
Wait, I still can't decide if they are writing about Java or JavaScript in this article and what the point is. Each programming language has money invested, orgs using it. For example the average salary for Erlang is way higher than the one for JavaScript OR Java.

So comes the next paragraph where they are still writing about Java. In fact they are quoting the salary estimate for Java and not JavaScript (the first one is avg $73k based on a quick Google search, the second one is $115k). They also quote Google using Java. It's true at a level, that some products at Google use Java but most of its infrastructure is built on Python, JS and some very low level technologies like C/C++. Java is only used in products where the team only consists of Java developers. Very rare.

They also call Java open source. To the extent of my knowledge OpenJDK (Java Development Kit) is open source but Java is not. Anything you call Java needs to be up to the TCK standards and approved by Oracle. Also the original JDK made by Oracle is not Open Source.

Here they add a link to their shop of a Java course in the article so I suppose this article is in fact about Java. But why get JavaScript mixed into it?

The last point is about the ease of learning it. Well, I could argue with that point but it's up to personal preference. I just have no idea if the writer of this article ever wrote a line in it.

Why don't tech publishers fact check their articles? It's actually a really short one and without misinformation it could even give some insight to the people with no experience. Actually, they are advertising it aggressively on social networks which means this probably reached a lot of people who will have no idea about what's what in the industry.

This article is probably the worst I have read in a while but would love to hear your top worst developer articles.

Any opinions to tell? Say it in the comments

In case you need blockchain developers, Dakai.io is here to help.

10 ways to improve your forms accessibility

Once suspended, laszlolm will not be able to comment or publish posts until their suspension is removed.

Once unsuspended, laszlolm will be able to comment and publish posts again.

Once unpublished, all posts by laszlolm will become hidden and only accessible to themselves.

If laszlolm is not suspended, they can still re-publish their posts from their dashboard.

Once unpublished, this post will become invisible to the public and only accessible to Laszlo L Mari.

Thanks for keeping DEV Community 👩‍💻👨‍💻 safe. Here is what you can do to flag laszlolm:

Unflagging laszlolm will restore default visibility to their posts.