This article covers some of the important object-oriented design concepts that apply to classes: Encapsulation, Overloading, Inheritance and Polymorphism.

Encapsulation is the process of hiding information that does not need to be exposed to other parts of the code. With classes, you can control this using the scope of your properties and methods. In order from least visible to most visible, there are: Private, Protected and Public.

Setting the scope to private means that the item is only accessibly from with the current class instance (or class for shared items). This makes it inaccessible to the rest of your code.

Private is the most restrictive setting. It is good coding practice to get into the habit of setting your items to Private if they are not needed outside the class instance. Private items can be referenced by their name.

A scope of protected means the item is accessible from the current class instance (or the class itself for shared items) and its subclasses.

A Public method, property, or constant is available to code throughout the project. Within the class, you can refer to the item by its name. In code outside the class, you reference it using dot notation using the class reference and the name, such as:

Overloading is the term for methods that have the same name, but have different method signatures (such as a different number of parameters or different data types for the parameters).

Note: In Xojo, you cannot overload methods based on different return types, although overloads do distinguish between having any return type and not having a return type at all.

To overload a method in your own classes, add a new method to the class and give it the same name as an existing method, but with different parameters. The method appears in the Navigator with the overloaded parameters shown below the method so that you can tell them apart.

To overload methods in built-in framework classes, you first need to create a subclass using inheritance.

You can also overload operators using a variety of specially implemented functions. A good example of a built-in overloaded operator is the “+” operator. If its arguments are numbers, it computes the sum; if the arguments are text, it concatenates the text.

Why is this useful? You may find situations where you would like to have an object that is a slightly altered version of one of the built-in classes. For example, you might want a version of the TextArea control that disables the Cut and Copy items on the Edit menu, preventing the user from putting sensitive data on the Clipboard. You might want to create a List Box that, by default, has the months of the year in it. You can create your own versions of these built-in classes by creating subclasses that you add to your project.

What is a Subclass?

Creating a Subclass from an Existing Class 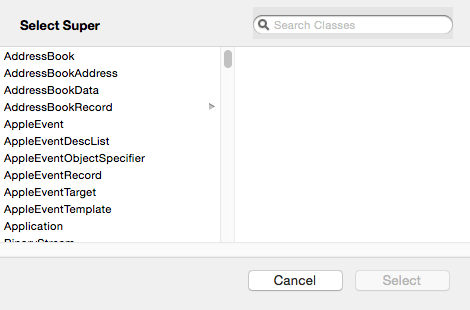 Creating a Superclass from an Existing Class

If you have an existing class that you have determined should really be a subclass, you can create a super class from it. Use the contextual menu for the class and select “Extract Superclass”. This opens a window that allows you to specify the name of the super class and to choose the method and properties to move from the class to the super class.

If you extract a superclass from an existing subclass, the new class will be added between the old superclass and the current subclass.

Virtual methods provide a way for a subclass to override its own version of a method that its super class has. Ordinarily, a subclass inherits the methods belonging to its parent.

Polymorphism is the ability to have completely different data types (typically classes) behave in a uniform manner. You can do this using inheritance and overriding, inheritance and events or class interfaces (described in a later article).

A simple example of this is the Animal, Cat and Dog relationship. If you want to have a generic animal object that knows how to speak “Meow!” or “Woof!” depending on whether it is actually a Cat or Dog, you could implement it using inheritance and overriding.

Next, create another subclass of Animal, called Dog. Add to it a Speak method that returns a Text with this code:

To test this, add a button to a layout. In the Action event of the button add code to create an array of Animals and then to loop through the array calling the Speak method:

When you run this code, you will see “Meow!” and then “Woof!”. Because Cat and Dog are both subclasses of Animal, they are allowed to be assigned to a variable (the animals array) with a type of Animal. So an Animal can be either a Cat or Dog.

And when you call the Speak method of Animal (in the loop), because of polymorphism, your code calls the Speak method of the actual subclass type that was added to the array. Later sections will also show you how you can accomplish the same thing using inheritance with events and with class interfaces.

O/RM is like adding brain damage to your database