The problem I tried to solve

By default, GraphQL adds a __typeName attribute to every element for each query. This attribute helps you determine what type represents each object.

GraphQL services provide a few meta fields, the rest of which are used to expose the Introspection system.

But when you have to invoke a mutation, you cannot pass everything. GraphQL will complain if you have unknown attributes for a given input or type. Hence, you need to remove, at least, the __typeName attribute.

So, how could you remove each of those attributes without knowing that much about the structure of the data?

The key point to solve the problem is recursivity. Since you don't know how many objects and array you have, the function must access and process those structures and then return each time the data is not an array nor an object (the base case).

Limitations of this solution

Before I talk about how I found optimization opportunities, I want to show you the latests benchmark results:

When I was writting tests, I configured Jest to generate the test coverage, to help me know if I was testing everything. What I didn't know was that the coverage it also tells you how many times a line is executed, as you can see in the following image: 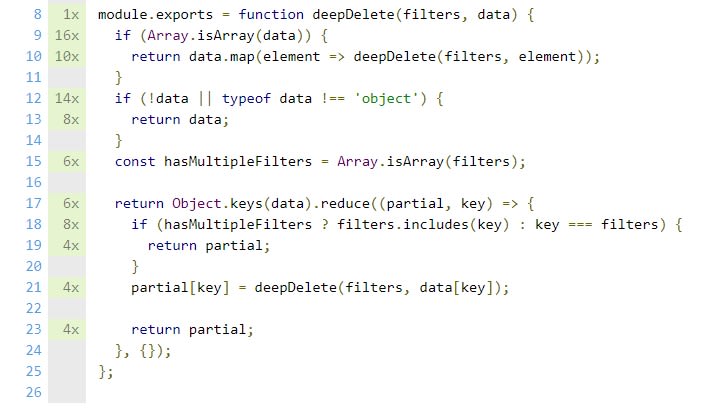 Viewing this made me think that there were a lot of function calls, more than the necessary. At that point, deepDelete was being called for every type of value. Every. Type. Of. Value. There are two lines in where was possible to improve this. Those lines are 10 and 21. Instead of just invoking the function, it could check if the element is an array or an object, and if not, not calling it.

This improvement was made for version 2.0.1: 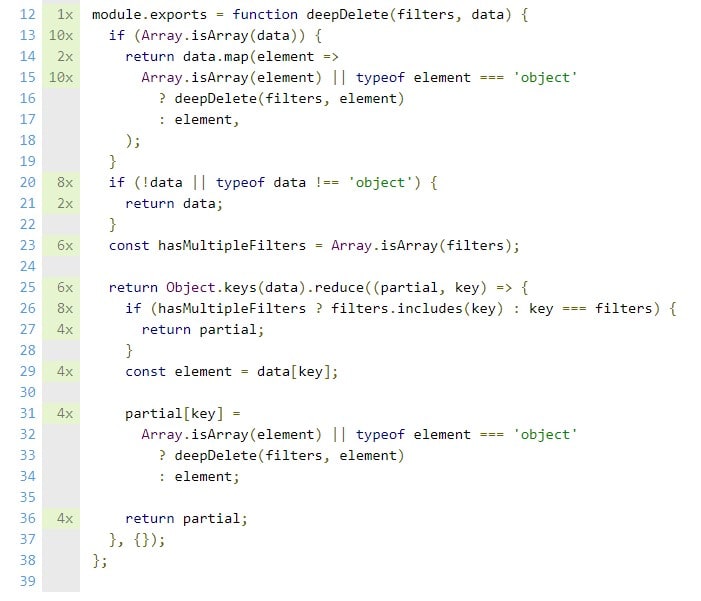 With this changes and a few minor fixes & improvements, I was able to reach v2.1.0 and get the results of the benchmark mentioned before.

Code coverages not also let you know which paths of your application you're testing but it also can help determine optimization points. Using it in conjunction with BenchmarkJS you'll be able to have more metrics about your code!

Luciano Graziani
I'm an Argentine developer. I like to learn everything, like full stack, ux/dx or svg/animation. I love sports, I do swimming and yoga 🧘🏽‍♂️!
Stop copying your process.env.NODE_ENV to local variables! 🤯
#javascript #babel #webpack #webperf
Add file extensions to your dynamic imports to reduce size
#webperf #javascript #beginners #webpack
I wrote my first babel plugin! (And it wasn't that hard!)
#babel #vue #javascript