It is a measure of how well internal states of a system can be inferred from knowledge of its external outputs. It helps bring visibility into systems. – Wikipedia

Distributed Tracing can be quite helpful in answering questions for your distributed system like,

It has a number of new exciting features and one such is a cleaner code for Selenium Grid along with support for distributed tracing via OpenTelemetry APIs. This is a pretty exciting and important feature for the admins and DevOps engineers to trace the flow of control through the Grid for each and every command.

Steps to start tracing your tests,

Assuming you have docker running on your machine,

The simplest way to start the all-in-one is to use the pre-built image published to DockerHub (a single command line).

You can then navigate to http://localhost:16686 to access the Jaeger UI.

We're going to add support for Open Telemetry API's(one of the many ways to do distributed tracing) using Coursier to generate a full classpath when started this way the selenium server will inform you that it has found a tracer on stdout.

Refer start-grid-distributed.sh if you want to start Grid in distributed mode.

to check if your grid deployment is ready 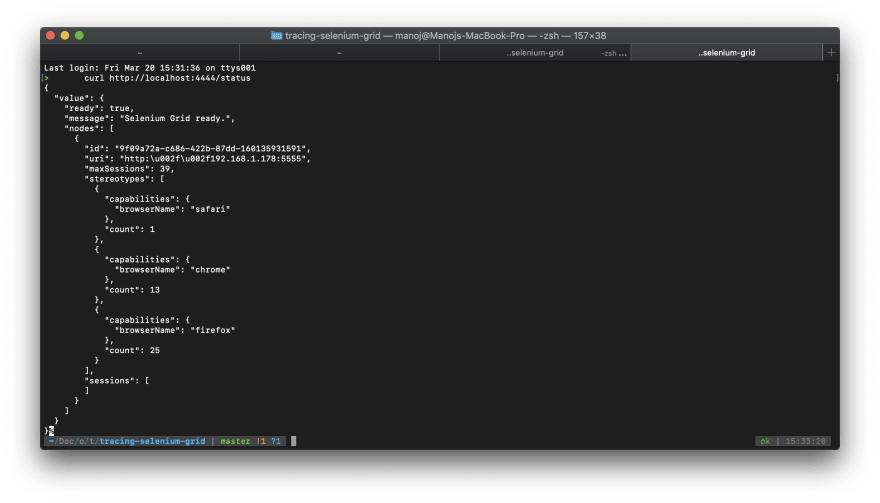 Point your tests as in DistributedTracingExamples Class and navigate to http://localhost:16686/ to view the outputs.

Under services lookup for Selenium-router and notices actions for each call made by your tests. An example below

A special thanks to ever-helpful Simon Stewart

Once suspended, manoj9788 will not be able to comment or publish posts until their suspension is removed.

Once unsuspended, manoj9788 will be able to comment and publish posts again.

Once unpublished, all posts by manoj9788 will become hidden and only accessible to themselves.

If manoj9788 is not suspended, they can still re-publish their posts from their dashboard.

Once unpublished, this post will become invisible to the public and only accessible to Manoj Kumar.

Thanks for keeping DEV Community 👩‍💻👨‍💻 safe. Here is what you can do to flag manoj9788:

Unflagging manoj9788 will restore default visibility to their posts.