I've chosen to call the language I've designed for the compiler SIMPLE for fairly self evident reasons. This language is Turing complete as it features conditional statements and variables.
As this compiler is an MVP, there will only be one data type: doubles.

The program should be enclosed in BEGIN..END. The top level should contain function definitions with a main function as an entry point.

Functions enclose reusable blocks of code. They can take arguments (must be doubles) and return a value (also a double)

There is no ‘return’ keyword, the evaluation of the last expression is the return value of the function.

Functions can be defined as external. This means that a definition exists elsewhere and will be linked later.

This allows the language to use functions from the c standard library and any user defined functions which may also be linked.

If statements decide which block of code to execute based on the result of a conditional.

For loops take the form of an identifier (loop variable), end condition and an optional step value.

Once finished, the compiler will be capable of emitting an executable for this program.

The program's output is an approximate sketch of a sin wave in the terminal! 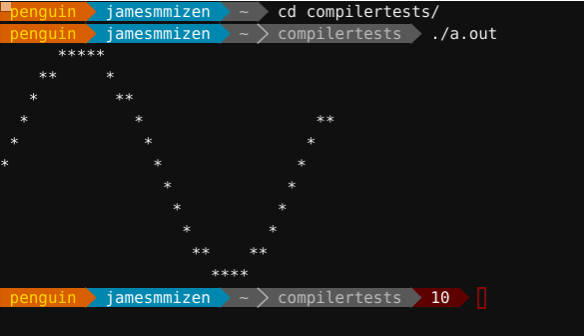 A compiler lends itself to a modular approach. One can take this to the extreme, for example see the paper on a 'nanopass' approach to compiler design1.

A level 1 DFD outlining the processes happening within my compiler is included below. It is a linear process, 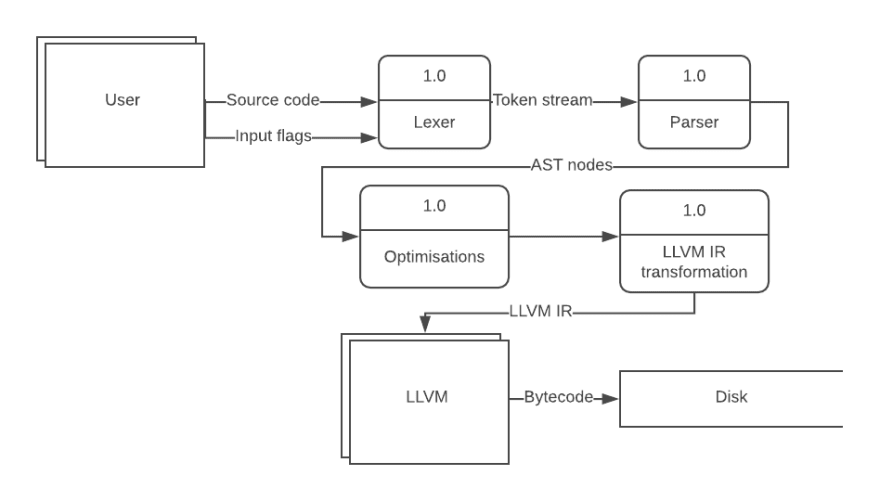 When a language feature is added to the compiler it's quite straightforward to extend each section to support it.

In the next section, we'll get into writing the lexer.

My Recurring Existential Crisis as a Software Engineer