Laravel is a powerful PHP framework that aims to make the web development process easier without sacrificing application functionality. This is especially true when you try to build a video chat app with Laravel.

Previously, I built a video chat app with WebRTC and Laravel and wrote about it here: Adding Video Chat To Your Laravel App. WebRTC is only one of the ways that people can implement video chat features. Companies like Agora also provide a fully packaged video chat SDK to provide a high-quality Real-Time Engagement video chat experience. As someone who has WebRTC development experience, I can tell you there are some limitations with WebRTC, such as:

After I was introduced to Agora, I was impressed that setting up the same video call feature is easier with Agora than with WebRTC. Let me walk you through building a video chat app with Agora in Laravel.

Why Agora Is the Preferred Solution

After building a video chat app with Agora, I want to highlight some of the advantages:

We will set up the various controllers and classes with methods needed to generate the Agora token to establish a call. Laravel's broadcasting system will also be activated.
We begin with the endpoints that will be accessed from the front end.

Add the following code to routes/web.php.

Uncomment BroadcastServiceProvider in config/app.php in your project folder.

3. Create a presence channel in routes/channels.php

We get to know online users by looking at who has subscribed to this channel on the front end. We return their ID and name.

4. Create an event for making a call named MakeAgoraCall

This event will be used to make a call by broadcasting some data over the agora-online-channel. Run the following command in your terminal/console:

Add the following code to MakeAgoraCall.php

Next, create the AgoraVideoController using the command line.

Add the following code to AgoraVideoController.php:

Breakdown of Methods in the AgoraVideoController

The data received from the MakeAgoraEvent by the users subscribed to the agora-online-channel contains the following:

From the MakeAgoraEvent, a user can determine whether they are being called if the userToCall value matches their ID. We show an incoming call notification with a button to accept the call.
They know who the caller is by the value of from.

We are going to create the user interface for making and receiving the video call with the ability to toggle the on and off states of the camera and the microphone.

1. Add a link to the Agora SDK

Add the following to the head tag of resources/views/layouts/app.blade.php.

On your terminal or command line, create a component called AgoraChat.vue with the following command:

Breakdown of the AgoraChat Component

On the AgoraChat page, we display buttons that bear the name of each registered user and whether they are online or offline at the moment.

To place a call, we click the button of a user with online status. An online user indicates one who is readily available to receive a call. For our demo, we see a list of users. The user named Bar is indicated as being online. The caller named Foo can call Bar by clicking the button.

Bar gets an incoming call notification with Accept and Decline buttons and the name of the caller. 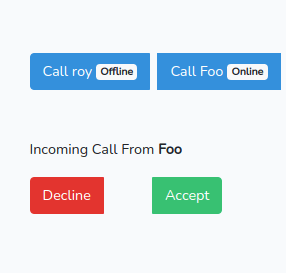 From the call notification image above, we see that the caller's name is Foo. Bar can then accept the call for a connection to be established.

The following diagram explains the call logic in terms of the code: 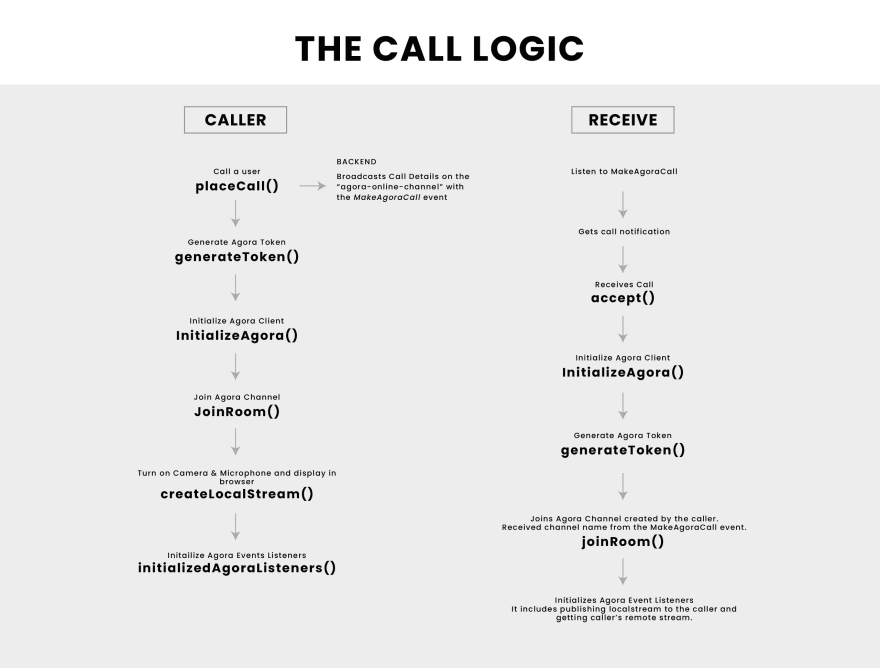 Add the following code to resources/js/app.js:

On your terminal or command line, create a view called agora-chat.blade.php with the following command:

Add the following code to the agora-chat.blade.php:

The .env file is located at the root of your project folder. Add the credentials you got from Agora and Pusher.

Video Demonstration of the Video Call

To confirm that your demo is functioning properly, see my demo video as an example of how the finished project should look and function:

You have now implemented the video chat feature in Laravel! It's not that hard, right?

To include video calling functionality in your web app, you don't have to build it from scratch.

Agora provides a lot of great features out of the box. It also helps businesses save development hours when implementing video chat into existing projects. The only thing a developer has to do is build a compelling front end - Agora handles the video chat back end.

Make sure the demo link or production version is served on HTTPS.

I also invite you to join the Agora.io Developer Slack community.