Being a Microsoft Student Partner (MSP) means we have to deal with our developer community every day. And every day, we are trying to teach and learn new things. I was selected MSP from my university, Mehran University of Engineering and Technology (MUET), Jamshoro in January 2020. Later, I trained some other students, both juniors and my batchmates and teachers to become MSPs from MUET. They got inducted as MSPs in April. Since then, they had been trying hard to learn and teach something new every day.

Recently, we, MSPs from MUET Jamshoro, conducted a series of webinars, TechTalks with MSPs from MUET, Jamshoro. For which we were joined by almost 340+ participants around the world. After the series, we had promised them that they would all get certificates of participation. But creating these many certificates was a hectic task for us. That's when I thought of doing this task using Python.
For this, I first imported Image, ImageDraw, and ImageFont from PIL.

Then, since I was generating certificates based on our Feedback forms, I had to import Pandas as well

After importing Pandas as pd, I read our excel file using pandas’ read_excel function and save it into another variable form.

Now I needed two more things to proceed with our real task, i.e. generating bulk certificates using Python. Those two things were the names and converting the names to a list. Other programing languages would take about 50+ lines to do this task and you might have required a loop or two to perform the task, but in Python, it takes only one line for the same. 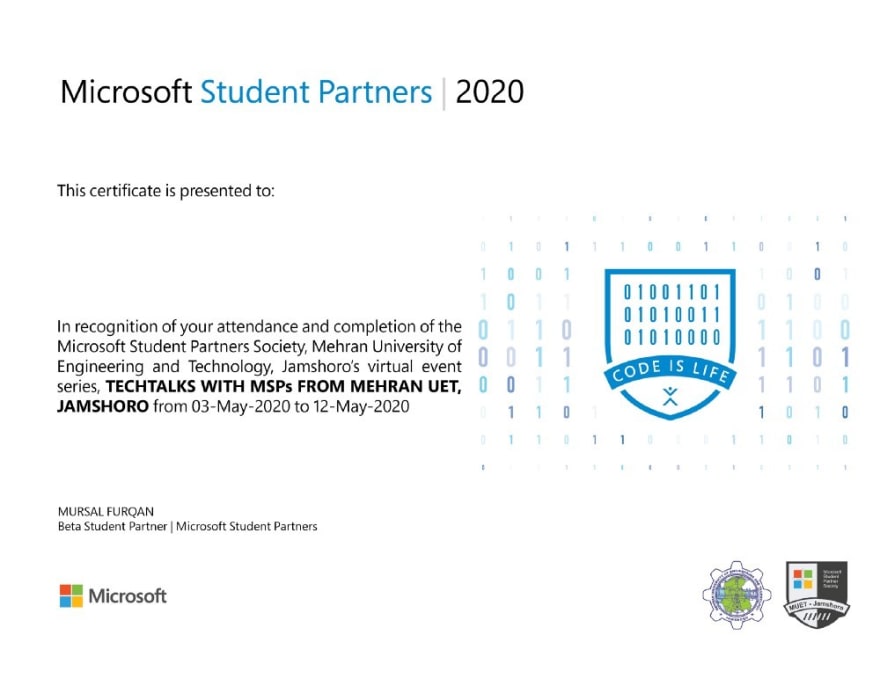 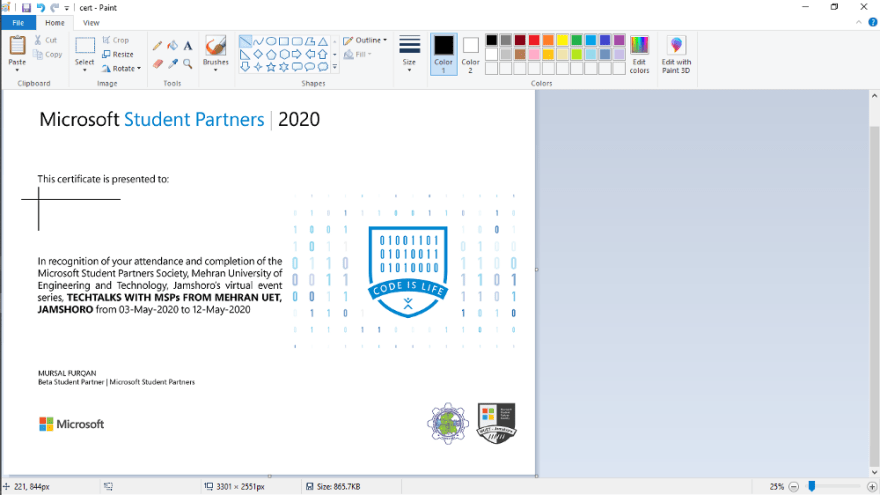 Now before proceeding to create certificates in bulk, I needed to create the code for a single certificate. for that, I created a dummy list with the name dummy_name. Then I first had to open the image, i.e. our certificate image. I did that using the open() function of the Image that I imported from PIL and save it into another variable, I'm.

After that, I now had to start drawing on our image. For that, I used the ImageDraw that I imported from PIL. I used Draw() function of ImageDraw to do that and saved it into another variable, d.

Now, I saved our coordinates into a variable, location followed by the text color that I wanted out text on the certificates to be and save it using the RGB color Scheme into a new variable, text_color. Finally, before starting to generate the certificate, I had to declare which font the text should be in. I did this using the ImageFont that I imported

Now, I had to embed these properties in my text. I used the text() function of ImageDraw(d).

Now in the last, I had to save the certificate as pdf. Using the Python, you can save your output file in any that you want. I also wanted to save each certificate with everyone’s name. Therefore, I used the following code. 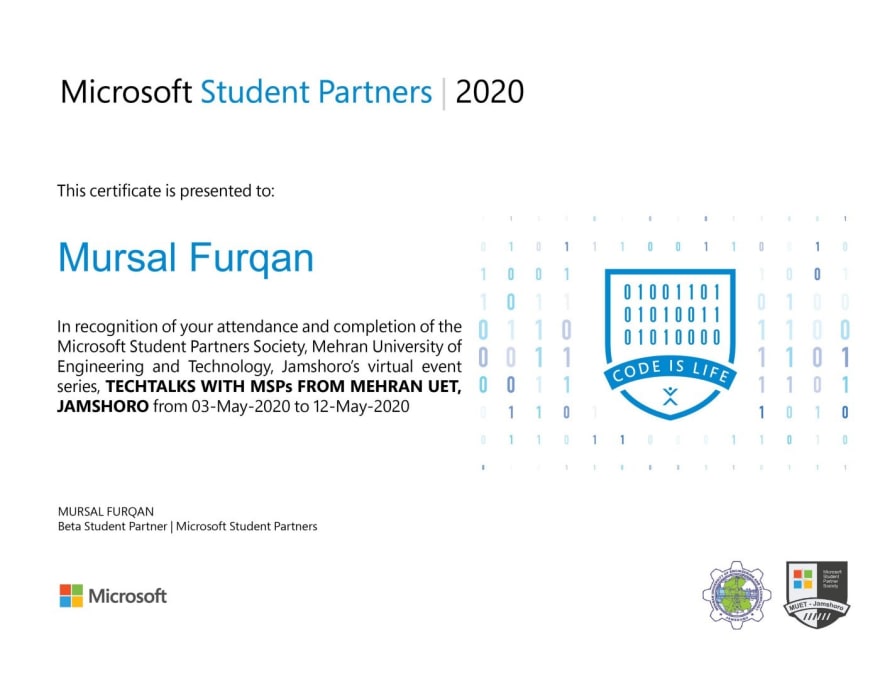 That’s how the final output of the above code looks.
Now that was the code for a single certificate. I did not have to use time on generating the certificates in bulk after creating the above-given code. I just had to introduce a loop at the appropriate place.
After I declared the name_list, I included a loop,

and then change the last line of my code from

You can compare your final code with mine at here:

And finally! 👏 that’s how I solved my problem of generating the certificates of participation for my event attendees. Now the problem was as to how to send these certificates to everyone separately. Well, I created a python program for that too. I will share that in my next article.

Once suspended, mursalfk will not be able to comment or publish posts until their suspension is removed.

Once unsuspended, mursalfk will be able to comment and publish posts again.

Once unpublished, all posts by mursalfk will become hidden and only accessible to themselves.

If mursalfk is not suspended, they can still re-publish their posts from their dashboard.

Once unpublished, this post will become invisible to the public and only accessible to Mursal Furqan Kumbhar.

Thanks for keeping DEV Community safe. Here is what you can do to flag mursalfk:

Unflagging mursalfk will restore default visibility to their posts.