I'm taking a bit of a different approach with my blog posts this week, I've decided to talk a little bit about testing in Python with PyTest.

I never learned how to write unit tests before and as I was discovering what they're all about I thought I'd share a bit with all of you.

What is unit testing and what are unit tests?

Unit testing and unit tests are function based tests that enable developers to verify individual modules (functions, classes, etc.) at the lowest level.

These tests are done to ensure that the particular module is working as it was designed to. Usually sample data is used in unit tests so that the module can be tested without needing to test all other parts of the program.

There are many different testing programs out there but I decided to use PyTest because it's very simple and easy to understand, in addition to being widely used.

For PyTest to work, we will need to first install PyTest:

After installing, we will need to make a test folder inside the app that we are currently working on. This test folder will be able to hold all of the files we will write our tests in. In our case we'll be testing some lists and classes. I want to test a file called lists.py inside of my projects app, so we'll create a file inside of our tests folder called test_lists.py. If you wanted to do this on the command line it would look something like this:

Note about file names: For every testing file you make, you will take the existing file name with your written code and prepend the file name with test_. That is why in our case we made test_lists.py, and in this file is where all of our testing scripts will be written.

We have initialized our class Projects and created a few functions just to create the internal storage for our class which can hold different data structures.

For our test file we will need to import the file that contains the data that we would like to test. Our tests folder is being held inside of the projects folder that contains our lists.py file. The folder structure would look something like this: 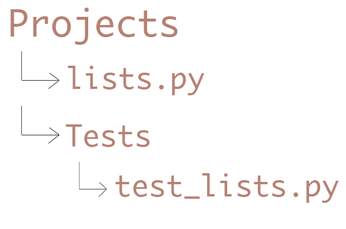 So the importing line would look like this given the above file structure:

If we wanted to write a test to confirm that an instance of our project class is exactly that, we could write something like this:

Assert is short for assertion and is the information provided that you want to test is made true by your module. Here we put in isinstance to confirm that a is an instance of the class Project.

We are also testing for our len function which confirms that the current length of the instance is 0.

Now to give the test a try, we'll go to our terminal and type in

This will run tests for all of the files that are located in our directory. After running it for that particular example we get back:

We can see from here that our test passed! And indeed a is an instance of the class Projects with a length of 0.

There are many advantages to testing, but just to name a few:

This is just a simple example to give you an idea of how unit tests can be written. I've included some resources below that can further your knowledge and understanding of testing in Python.

Here are a few helpful resources that I used to help myself understand unit testing better:

Thanks again for taking the time to read my article on tests. I hope that this could be helpful for you the next time you decide you want to write tests in Python.

Once unpublished, this post will become invisible to the public and only accessible to Megan.

Thanks for keeping DEV Community 👩‍💻👨‍💻 safe. Here is what you can do to flag mwong068:

Unflagging mwong068 will restore default visibility to their posts.