JavaScript continues its popularity that it doesn’t necessary to mention it anymore.

JavaScript is the most commonly used language in GitHub over the years, as shown in the graph in GitHub’s report, Octoverse. Also Stack Overflow’s recent survey, “Developer Survey Results 2019”, JavaScript was named as the most popular technology. 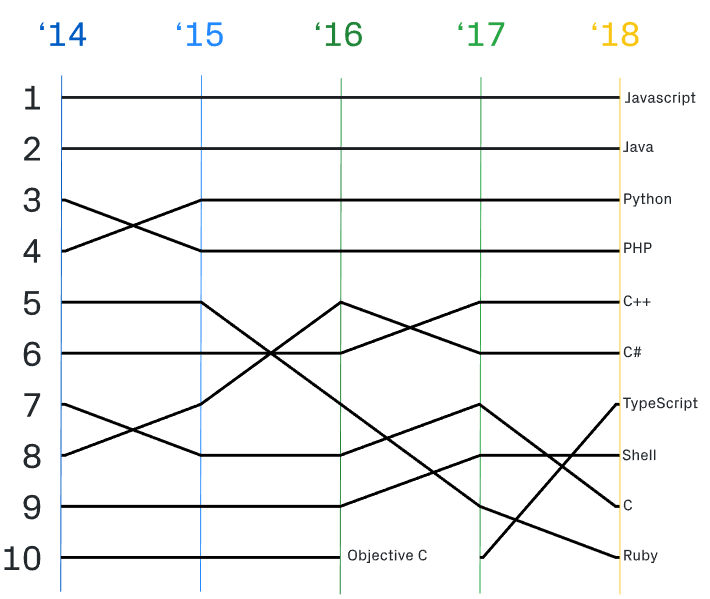 In particular, ECMAScript 2015 and subsequent ECMAScript specifications seem to be accepted by many developers without much resistance. 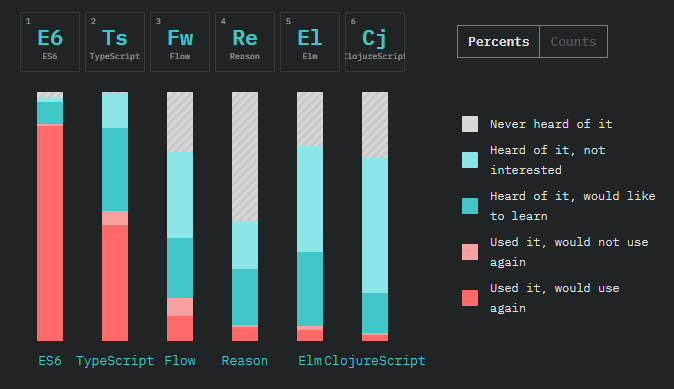 JavaScript Flavors from the ‘State of JS 2018’ survey.

In this article we will look at the key features of ECMAScript 2018 and the proposals expected to be included in the following specifications, ECMAScript 2019 and ECMAScript 2020.

Bear in mind:
The content of this article is based on June 2019. Depending on the time you read, the content and facts of the article may vary.

Although it does not directly affect the linguistic aspects of JavaScript, there have been some changes that could affect indirect aspects, such as use environments and ecosystems.

TC39, a technical committee discussing JavaScript standard specifications, has decided to change its operating structure from 2019. TC39 holds meetings six times a year, and the committee has grown to a point where about 40 to 60 people attend meetings.

The structure, which used to be the chairman and vice chairman, changed to a horizontal structure in the form of shared responsibility by three co-chairs (Aki Braun (PayPal), Brian Terlson (Microsoft), and Yulia Startsev (Mozilla). It also opened its official website(https://tc39.github.io) in March 2019.

In the article “A Year (plus a little) on TC39”, written by Aki Braun, co-chair of TC39, you can see the progress of the TC39 meeting and the appearance of the meeting.

Due to the security vulnerabilities Meltdown and Spectre, browser vendors have changed their default settings to disable the use of SharedArrayBuffer object as of January 5, 2018.

These settings are still being maintained to this day, except Chrome. Chrome reactivated since v67, through the site isolation (see “Isue 821270: Re-enable SharedArrayBuffer + Atomics”).

The adoption of chromium by MS Edge

Microsoft surprised many by announcing on December 6, 2018 that it would transitioning its browser, Microsoft Edge, to Chromium-based (see “Microsoft Edge: Making the Webbetter through more open source collaboration.”)

In a Q&A session with Microsoft held on the sidelines of the TC39 meeting on Jan. 29, 2019, the following facts were revealed regarding Microsoft Edge’s Chromium transition.

There’s no plan on open sourcing the old rendering engine.
The updates of the existing JavaScript engine, ChakraCore, will continue but has no long-term plans.

ChakraCore is currently being used in various projects outside the browser. So, despite the change of direction for Microsoft Edge, our team will continue supporting ChakraCore (see “Chromium adoption in Microsoft Edge and future of ChakraCore”).

The purpose and future plans for transforming Microsoft Edge to Chromium-based can be found in the “Microsoft Edge and Chromium Open Source: Our Intent” article.

From the developer’s perspective, this transition of Microsoft Edge can reduce the burden & struggles of cross-browsing development.

However, from the perspective of the Web ecosystem, something worrisome could happen. Because this will cut the diversity of the browsers.

For the concerns about diversity, see the article “Chrome is turning into the new Internet Explorer 6” and Mozilla’s “Goodbye, EdgeHTML”.

Since the module support has been added in ECMAScript 2015, modules are widely used as an essential functionality now.

Let’s take a look the coverage and the current status of the dynamic import() syntax and native module support to further expand of the use of the module.

Promise based import() syntax, will let load module dynamically. This proposal was staying at Stage 3 for awhile, but finally 6th June, reached ‘Stage 4’ and become a part of the ECMAScript 2020.

Starting from Firefox 60, the import() syntax can be used by setting the javascript.options.dynamicImport flag, and this was enabled by default in Firefox 67.

Starting with Firefox 60 released in May 2018, native modules(ESM) can be used without flag(see “Firefox 60 — Modules and More”). Node.js 8.5.0, released by September 2017, experimentally supports ESM.

The Node.js foundation, formed ‘Module Team’ for the official support of ESM. The work of the Module Team is split into 4 phases.

If you are dealing with asynchronous call streams, you can create an async operator factory.

A tagged template literal is a function to receive the template and return a modified string. The string passed to the function can be one of the following types:

Previously, if the template had some sequences of characters after backslash, it was treated as illegal and no raw string was returned.

ECMAScript 2018 eliminates all of the syntactic restriction related to escape sequences and returns the string in raw form. In this case, the interpreted value returns undefined.

Checkout “ES2018: Template Literal Revision” for more information about the problems and solutions in the template literal.

Like the finally syntax of the try...catch statement, this proposal introduces the similarity usage for Promise object.

The dot(.) matches all characters, but not against for \r nor \n. To solve this problem, introduces the new flag s.

Provides the ability to name a capture group. The(?<name>pattern), will let adds the <name> to the capture group pattern, and then uses the name as a reference the capture.

Unicode property escapes are a new type of escape sequence available in regular expressions that have the u flag set.

ECMAScript 2019 is in the Candidate Draft state. As seeing the previous release dates, the final release is expected to be announced around June 2019.

The initial proposed name was “.flatten()”. But, MoTools(widely used legacy library), was already offering a similar functionality under the same name ‘array.prototype.flatten()’. If the name “.flaten()” is accepted as is, it is likely having issue for all those websites that uses MoTools.

To avoid the possibility of conflict, .flatten() was renamed to .flat().

Object.fromEntries(), transforms a list of key-value pairs into an object.

Optional catch binding proposal, is to allow parameters to be omitted if parameters are not used in the catch syntax in the try...catch statement.

This specification currently works well with all JavaScript engines. However, Microsoft Edge with ChakraCore generates a sort error with array containing 512+ elements.

The below screenshot illustrates the stability test results on Edge and Firefox. As you can see Edge is failing.

RFC 8259 specifies JSON text to be encoded as UTF-8 format, for JSON object data exchange. But when JSON.stringify() is used, some UTF-16 codes (characters from 0xD800 to 0xDFFFF, which are classified as ‘surrogate’) aren’t encoded in UTF-8.

The ECMAScript 2019, returns an escape sequence instead of returning an invalid Unicode string, as shown(Edge) in the following illustration.

ECMAScript claims JSON as a subset in [JSON.parse](https://tc39.github.io/ecma262/#sec-json.parse), but this is not true because JSON strings can contain unescaped U+2028 LINE SEPARATOR and U+2029 PARAGRAPH SEPARATOR characters.

This proposal suggests ECMA-262 can be extended to allow these characters to not not break the JSON to be subset of ECMAScript. 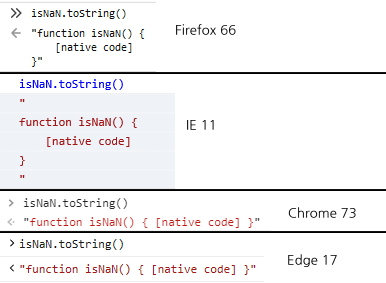 At this point, finished proposals(Stage 4) for ECMAScript 2020, are String.prototype.matchAll() and import() only, but as times goes these list will include more items.

Some new or incomplete proposals

Let’s take a look at some interesting proposals were not in the final stage yet.

Typically to access the top-level object is through the ‘window’ object in a browser environment.

As of the expansion of execution environment, the way to access top-level object also been changed.

Checkout “Inner and outer windows” for the differences between Window and WindowProxy object.

The below code is the simplest way to get the reference of the top-level objects(the “global”) regardless of the environment. But this approach causes Content Security Policy (CSP) violation in Chrome apps. (see “es6-shim Breaks Chrome App CSP”).

The well-know ES6 compatibility shims library, ES6 shim, use below function to get the global object and this is the common and best way at this moment.

The new proposal ‘globalThis’ is to provide the way to access top-level and get rid the discomfort depending the environment. Currently is staying at ‘Stage 3’. Not finalized yet, but in Chrome 71 and Firefox 65, and Node.js 12, globalThis objects can be used as follows:

Similar as the ‘Array.prototype.flat()’ case, the first proposed name was “global”. But the use of this name, reported breaking flickr.com, which let to change the name to ‘globalThis’.

The use of class field declarations are available starting with Babel 7.1.0 (released September 17, 2018). However, this proposal isn’t reached final stage yet, staying ‘Stage 3’ at this moment.

This proposal introduces declarative syntax for class variables in a more intuitive and easier way.

To initialize instance variable is through the constructor.

With the class field, the instance variables can be defined as the //Initializer part of the following code and the initialization area runs before the constructor runs.

At the time where JavaScript wasn’t providing the way to declare ‘private’, many developers used underscore(‘_’) as prefix as a convention. But this wasn’t making realistically to work as private(well, there is a way to actually make the variable or method work as private).

The private declarator uses the number symbol(#) as a prefix to explicitly declare that it is a private. Variables or methods starting with ‘#’ can only be accessed within class blocks.

The following is a simple example of declaring and accessing class fields in various forms.

The current ‘Stage 1’ built-in module specification is same as ESM. The difference of the normal ESM is that these are “built-in” and distributed with the browser itself.

Built-in module, is not directly exposed to global. Only available through the import syntax. If the browser has support on built-in module, these modules are imported with the “std:” prefix + module name, as shown in the following example. In this example, loads KV Storage Module.

The KV Storage Module and Import maps proposal is closely linked to the build-in module specification. These two are not part of ECMAScript specification and they’re belongs to the WICG(Web Incubator Community Group).

KV Storage has similar APIs as the Map object. Strings and serializable data types can be used as key value. It returns a Promise or Async iterators, which are treated asynchronously.

The two named exports are “storage” and “StorageArea”.

Import maps proposal allows control over what URLs get fetched by JavaScript import statements and import() expressions, and allows this mapping to be reused in non-import contexts.

For example, KV Storage, a built-in module, is currently available only in Chrome. In a supported browser, you can load without issue, but for those without the support, you need load polyfill of KV Storage instead.

The following example shows how to use Import maps. Define map for module and use the key URL value for import statement.

In the browsers without support, the import URL is recognized and processed as a normal import URL. If has supports, they will flow according to the mapping information.

JavaScript is still making steady changes. It is proving that it wasn’t a coincidence being the most popular language for many years. The coverage of new ECMAScript releases for browsers and Node.js is also constantly increasing, and even for some proposals before its completions.

Let’s journey continues for all!.

Get started with the new Azure Static Web Apps CLI