./scripts/run.sh is a fairly simple shell script to follow , here is how it works:

Why all these extra scripts?

Let me elaborate on the various issues I encountered while getting this to work.

There were no changes done to start , eject and test.

Included are simple background.js and contentScript.js which send a GET request to https://postman-echo.com/get.
The reason I included them is mainly for completeness and as a reference for others on how they work with a React-Chrome-Extension.
Furthermore they are also an example of chrome.runtime

What does it actually do?

This sample extension will add a div and a button inside it , as seen in the image below.
Once you click on the button it will send a GET request to https://postman-echo.com/get and print the response.

How to load and debug it? 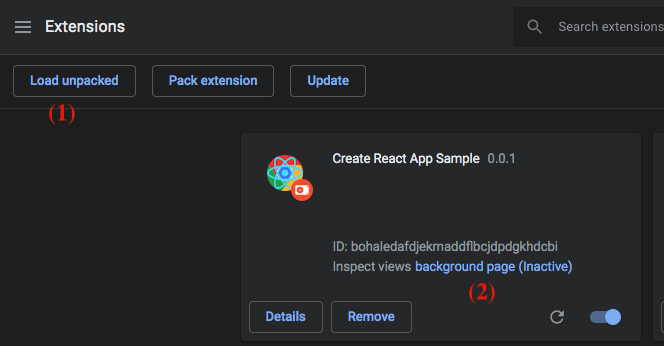 While trying to do this I was trying to follow a few other examples as shown in the references section.
Unfortunately none had all the elements I needed or explained all the details I elaborate on here.
I hope this will help anyone else who would like to create a React-Chrome-Extension.
(I'm sure my code can get better, open an issue on GitHub and I'll happily fix it)