How an unthinkable thing turned out to be an interesting experience

Throughout my career, I was always focused on learning only native iOS technologies such as Objective-C and Swift. I considered (and still consider) myself as a "non-believer" in cross-platform solutions like React Native or Flutter  -  it's interesting and usable for small-scale projects and not really for bigger ones, because of its maintenance problems and scalability. And recently, at FootballCo, we started building brand-new Goal news and live scores application for Goal.com, which will be developed using Kotlin Multiplatform, and in this article, I want to share my experience of writing and maintaining a Multiplatform code.

At first, I was very confused (and a bit scared, there's nothing to be ashamed of).
Surely, I've already had some experience in building Android applications in Kotlin, but still, as an iOS Engineer, just the thought of working with Kotlin on a daily basis was frightening. Imagine  -  you just started a career with a pretty complicated language like Objective-C, then switched to much more pleasant Swift, developed your skills there and now you should change your paradigm and work on Kotlin and think as an Android developer (spoiler - not really).

Swift, Kotlin, and Objective-C "Loved vs. Dreaded" comparison, according to StackOverflow

But as an Engineer - you should be always open to new challenges and for learning new technologies, our world evolves so fast that you should be on the same pace with new technologies, and gaining new skills is a MUST if you want to succeed.
And surely I wasn't a totally new person in the Android world - my Uni thesis was about an application written in Kotlin, so life kind of prepared me for such a turn of things :)

Why did we decide to go with the Multiplatform approach?

The biggest benefit - code reusability and maintenance. In our legacy applications, we saw that big chunks of codebase could be shared between platforms - network layer, analytics, data persistence, most parts of business logic. All of these are pretty essential parts of any mobile application and we could easily write them once in cross-team collaboration, cover it with tests and use it on both platforms. 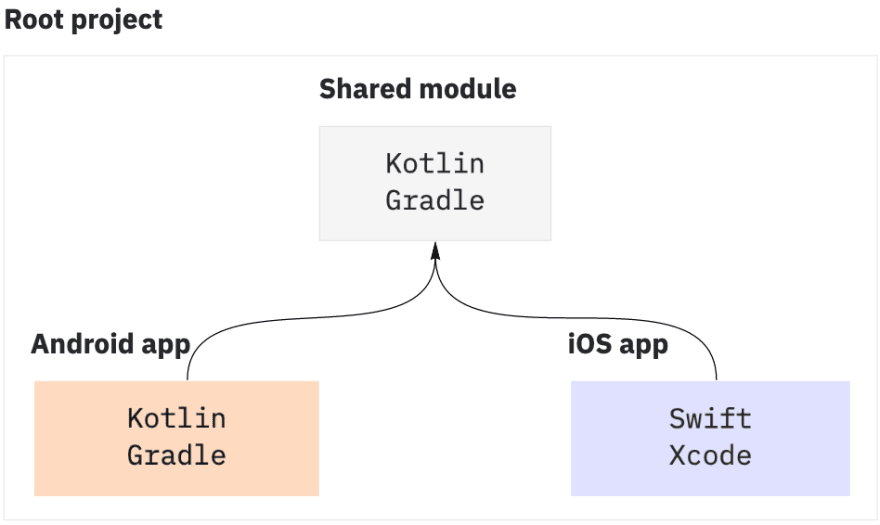 Every Multiplatform project in a nutshell

With it, comes the speed of delivery, better quality, and knowledge sharing. Just imagine - this big part of business logic, that your team worked on for months, could've been written by x2 amount of people, which could catch more bugs and come up with some interesting solutions.

MVP and our start with KMM

Along with KMM (from now on I'll use this as a shortcut for Kotlin Multiplatform), we decided to write our apps using brand new platform technologies such as SwiftUI and Jetpack Compose. We kicked off our process with an MVP project in order to test all of the frameworks which I mentioned above and it turned out pretty well. We built a simple proof of concept application, integrated and tested all frameworks which we would use in a production app, and prepared all necessary automations.

To learn more about our MVP project and our findings , check this article by our Android Engineer Aleksander Jaworski: https://akjaw.com/kotlin-multiplatform-mobile-poc-conclusions/

We decided to put all our automations into fastlane, most of our engineers are used to use it and it contains a lot of pre-built solutions suitable for our needs. From the get-go, we understood that, at the initial stages, we would need to rebuild the KMM framework regularly - pretty much with every minor change in it, so putting it to the separate repository and accessing it from there was not the way to go, so we needed to come up with a solution that builds shared framework fast enough. At later stages, when changes to the shared framework will occur more rarely, we will surely encapsulate it into a separate repository.

While creating this proof-of-concept, we also changed our approach to daily ceremonies and merged most of them, we "switched" our mindset from thinking that we are two different teams (Android and iOS ) and started to position ourselves as one mobile team. I think for every project and every company it's very important to have such close communication between Android and iOS folks - after all, we are building almost the same application but for two different platforms, and our end-users should have the same experience on both.
As part of this process, we introduced pair-programming sessions, during which iOS developer sits with Android folks and, in collaboration, they build a multiplatform part of some feature - from modeling, implementing, and covering it with tests to performing a basic platform integration and checking if everything works fine.

These sessions were the most helpful thing so far - they gave our team members a brief introduction to Kotlin and after just one session you can debug, test, and introduce changes to multiplatform code by yourself!

Pros and cons of the KMM approach

So, after 6 months of working in a multiplatform approach, we already noticed a lot of very cool things that changed our way of work in a positive way.

Some of them are minor and not widely applicable, some will be surely helpful for any team, so here's the list:

In general, our team (as a whole, not just the iOS part of it) is very happy with the KMM approach. Quality-wise, positive feedback that we have is much bigger than the cons of it - most of the problems, like learning Kotlin and IDE, will be resolved in the first months and later on - you'll just catch the wave and you'll forget you used to hate it :)

We do see a very big future in the Multiplatform approach and we are looking forward to seeing where it gets us.
If you have any questions regarding our process, interesting findings during building proof-of-concept application, maintaining KMM in the iOS environment - don't hesitate to ask!

Introduction to Kotlin Flows and Channels

Oleksandr Masliukivskyi
How do you motivate yourself to write when so few are reading it?
#discuss #watercooler #meta
5 Life-Changing Lessons I Learned From Being Laid Off That Will Put You Ahead Of 97% Of People
#beginners #productivity #motivation #codenewbie
#DEVDiscuss: to Specialize or to Generalize?
#devdiscuss #career #beginners

Once suspended, oleksandr_masliukivskyi_1 will not be able to comment or publish posts until their suspension is removed.

Once unsuspended, oleksandr_masliukivskyi_1 will be able to comment and publish posts again.

Once unpublished, all posts by oleksandr_masliukivskyi_1 will become hidden and only accessible to themselves.

If oleksandr_masliukivskyi_1 is not suspended, they can still re-publish their posts from their dashboard.

Once unpublished, this post will become invisible to the public and only accessible to Oleksandr Masliukivskyi.

Thanks for keeping DEV Community 👩‍💻👨‍💻 safe. Here is what you can do to flag oleksandr_masliukivskyi_1:

Unflagging oleksandr_masliukivskyi_1 will restore default visibility to their posts.