The Decentralized Identifiers (DIDs) v0.11 specification defines a standard for a decentralized, self-sovereign identity layer on the internet that can be implemented by any DLT. It defines how identification is structured, how communications are established and permissioned. The Sovrin Foundation extends this standard with specifications for claims and claim definitions in an effort to make it widely applicable while the official W3C standard for claims is in progress. Sovrin further provides an open source implementation of their specification with Hyperledger Indy. 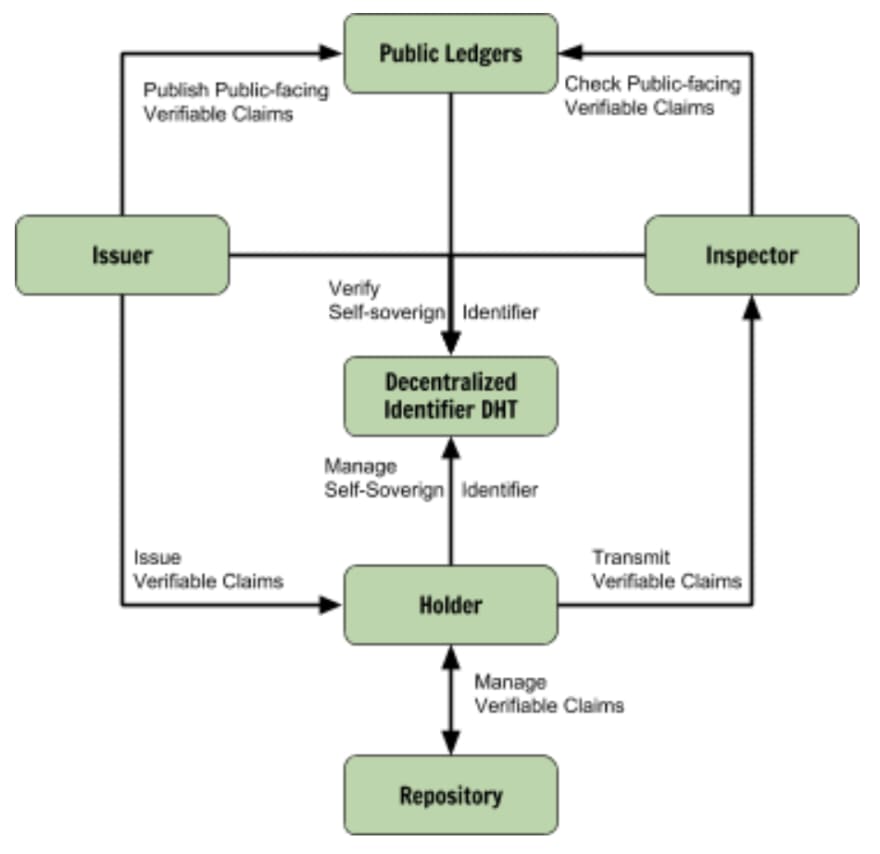 Decentralised identifiers (DIDs) are introduced to facilitate trustable identification in a decentralised environment;

-DIDs are a forever persistent identifier that resolves to a resource which serves as a description and configuration of that DID (the DID descriptor object or DID document).
-DIDs do not require a centralised authority to register, resolve, update, or revoke.
-DIDs can have cryptographically verifiable ownership and associated metadata.

Befitting the requirements defined above, a DID can be implemented as either a pure DID with no cryptographic properties, a cryptographic identifier (CID) or with an alias. Note that these variants are considered subgroups of DIDs as a whole.

A pure DID is a universally unique identifier without any cryptographic powers (i.e., no private key, no ability to sign anything). Implemented with UUIDs and used when the owner is currently unable to store private keys (e.g., refugees). An example pure DID may look like this:

An alias is "a hash of a conventional address produced using a specified normalization algorithm and a specified hashing algorithm." An example for the alias "Walter" may look like this:

Claims are signed attestations of a certain structure made by a DID (the issuer) about itself or another DID (the holder) to be inspected by a third party (the inspector). This structure is dictated by a claim definition (or claim schema), which all participants can fetch, compare and understand. There are 5 fundamental types of claims which can be used to provide certain levels of information security, ranging from public over encrypted to private.

Cleartext claims are claims without any encryption. They are typically used for public on-ledger claims, e.g., for business and organisations public record information.

Encrypted text claims are the encrypted counterparts to cleartext plains using either symmetric or asymmetric encryption.

Hash signature claims are specially encrypted trees of cleartext claims. They can be used to reveal certain claims to certain parties selectively.

Proof of existence (POE) claims are just hashes of anything. They can be used to prove that a certain object (e.g., signed document) existed at a certain point in time, e.g., to prove consent as required under GDPR.

On and Off Ledger – What Goes Where

Information on the ledger is public and permanent. Therefore only data that is not personally identifiable should live there. All claims that contain any kind of private data should be kept off-ledger and only shared via secure and not co-relatable meaning (peer-to-peer communication as defined in Sovrin and implemented in Hyperledger:Indy).

For a decentralized identity system to be widely adopted, we need to reduce the barrier to entry and improve the on-boarding process. Therefore, we believe that a flexible resolution of short, human-readable names and resource identifiers that map to accounts, data or services should be defined.

Thanks for keeping DEV Community 👩‍💻👨‍💻 safe. Here is what you can do to flag radixdlt: