Test driving a new app is something that’s usually a completely procedural affair.

Don’t get me wrong, I love trying out new stuff and sharing it with my fellow developers. But Google Earth Studio is definitely above and beyond "meh" and has so many use cases!

So what the heck is Google Earth Studio?

You know those cutaways of high-tech cities you see in video games and sci-fi movies? Those could have been developed using Google Earth Studio.

But you're probably wondering how this tool can help you as a developer?

This is an AWESOME tool when you're building custom websites. Whether you're needing a robust 3D model for a city council page or want to trick out driving directions for a local business, there are a lot of use cases especially as a freelancer. You could even incorporate custom scenes into gaming apps.

It’s just like a non-linear video editor like Final Cut Pro or Adobe Premiere, only it’s an entirely browser-based experience. Starting projects, saving projects, even rendering projects are done in Chrome (Google Earth Studio only supports Chrome right now, due to the software used to power the 3D rendering engine).

Once you start a project, you’re given a view of Google Earth where you can either explore or type in the location you want to start animating.

For example, in the screenshot below, I typed in Minneapolis because I knew it would be ripe with 3D buildings and other imagery. 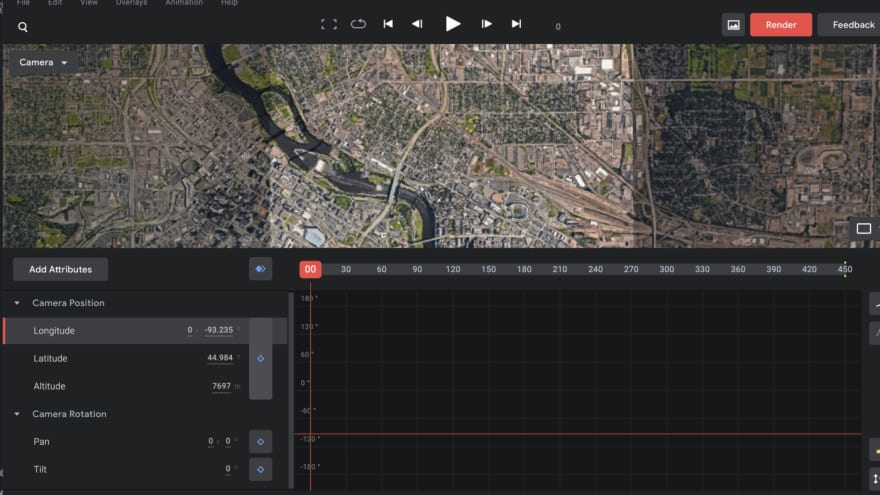 Now, I can either tilt the camera and zoom in using my camera controls (shown on the left side of the editor in the above photo), or use my trackpad to tweak as necessary to find some imagery with good textures. Here is a closer look at the same city.

Note how the Camera Position and Camera Rotation controls have updated (in real time) when I adjusted the image using my trackpad along with my Mac keyboard’s alt and control keys to control tilt and pan: 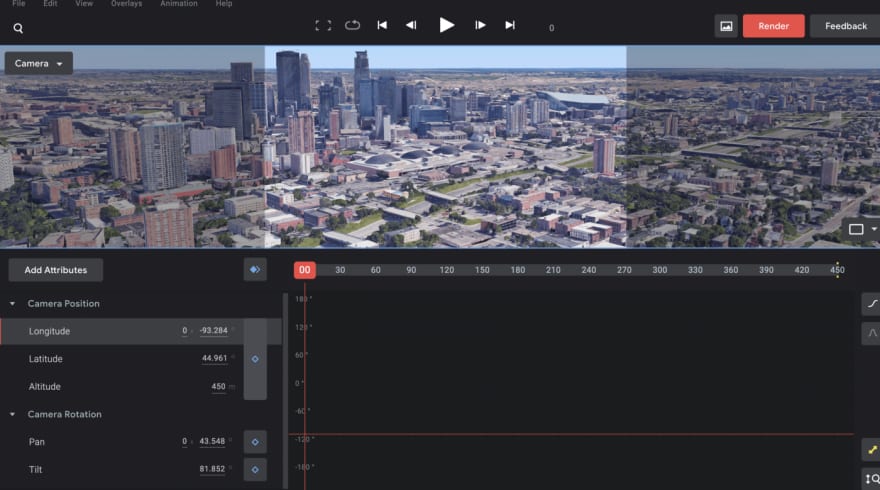 This looks like a good starting point for our animation.I’m not trying to do anything crazy with camera angles or cutaways, so we’ll just hit the “Keyframe All Attributes” (the shaded blue diamond directly left of the top of the playhead) button. A keyframe is basically like a bookmark, and this one is telling Google Earth Studio I want this to be the starting point of my animation.

Inside the playback area, notice how the longitude is updated to reflect its current location. The Camera Position and Camera Rotation parameters also have a shaded diamond rather than a hollow one, indicating there is a keyframe for each of them at this location. Looking good!

Let’s say we want to go from here to the IDS Center, the tallest building in Minneapolis. I’ll just type that in up at the search bar and it is returned to me instantly: 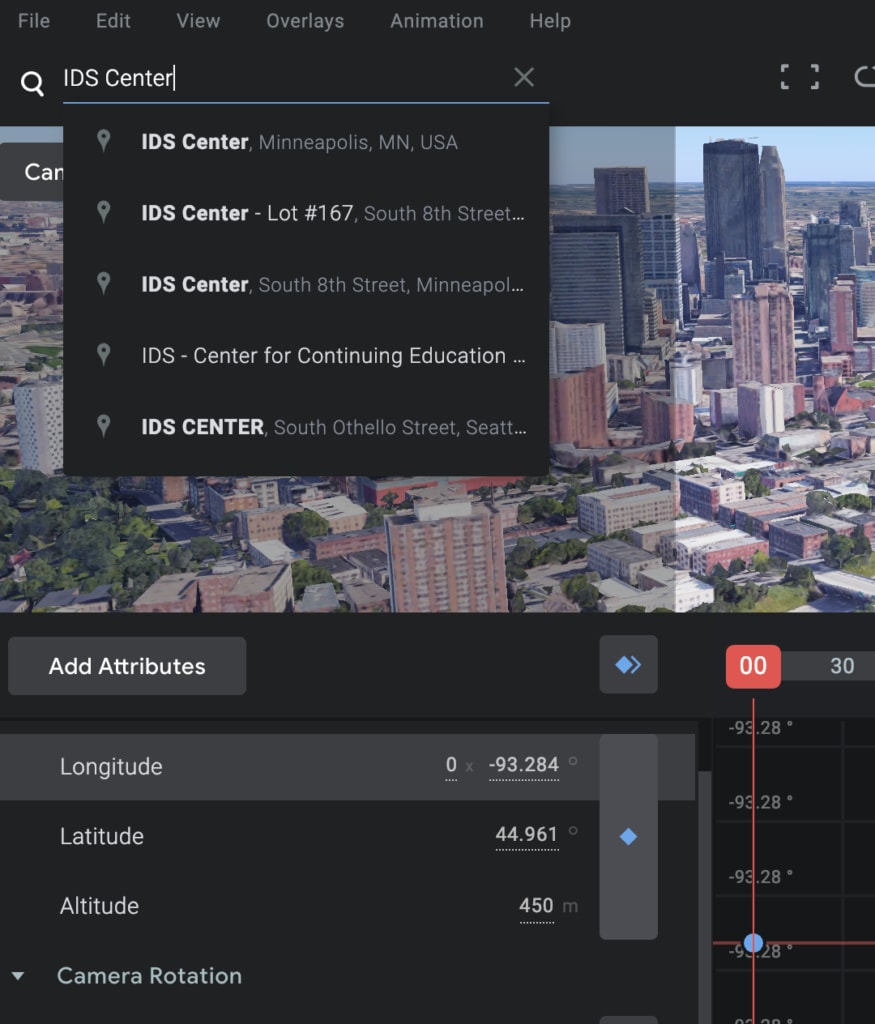 I’ll hit return and it now it brings me to the IDS Center. Notice that the keyframe buttons in the Camera Position and Camera Rotation areas have changed to yellow, as a “heads up” that my current position does not match my original position of the keyframe: 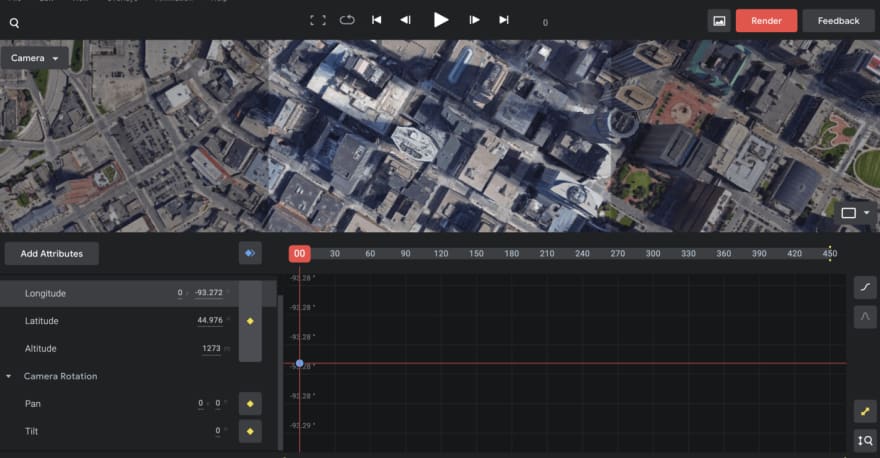 Now, I will use my trackpad along with alt and control once again to tweak my position. I will also move my playhead to frame 450, since that’s where I want to add another keyframe, indicating the end of my animation. Once again, I simply hit the Keyframe All Attributes button and a keyframe is added to frame 450: 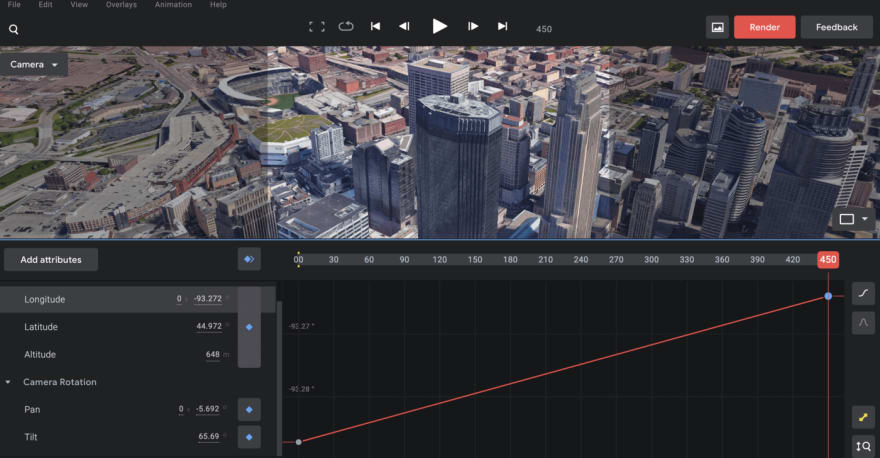 Now I will preview the animation by hitting the play arrow: 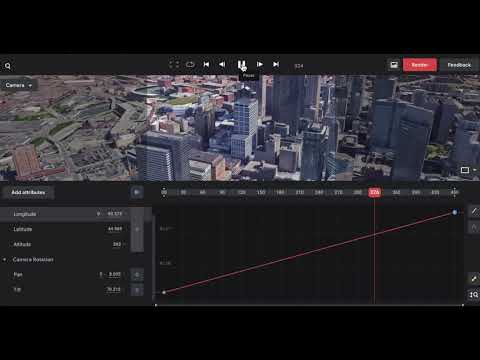 Have you tried Google Earth Studio? What are you using it for? Let me know in the comments below!

For more info on rendering and export, check out the other Google Earth Studio video I produced and be sure to subscribe to the RealToughCandy YouTube channel!

Once unpublished, this post will become invisible to the public and only accessible to RealToughCandy.