Python environments have long been one of the most confusing and annoying parts of a python work flow for data scientists (or anyone really). The lack of a clear and concise explanation for environments was recently brought to my attention by this tweet:

While I’m no Jake VanderPlas, I am someone who has always struggled with python environments and definitely see the need for a clear and concise explanation of environments. Here you will find a simple guide explaining what virtual environments are and how make them to work.

WTF is a virtual environment

Python virtual environments allow you to wade through the shitshow that is installing python packages. There are two very common python package managers that most people in data science use pip and conda.

It can be simple to install packages with these tools (sometimes) but we have all gotten awful and confusing pip errors!. There is also the issue of packages that require different versions same dependency, or packages that don’t even work with the version of python that you are using.

This is where virtual environments come in handy.

This command will create a new environment located inside of the anaconda directory ~/anaconda/envs/[environment name]/ . When creating a anaconda environment you can include package names as arguments:

This will create a new environment called test_env the packages numpy, pandas, and sklearn installed already. To use the shiny new environment that you just created you simply run:

When you are in the conda environment you can conda install any required packages or if those packages aren’t available through conda channels you can also pip install packages like you would normally.

To view the installed packages in your current environment you can run conda list which will print out the packages.

How do I know what environment I’m in 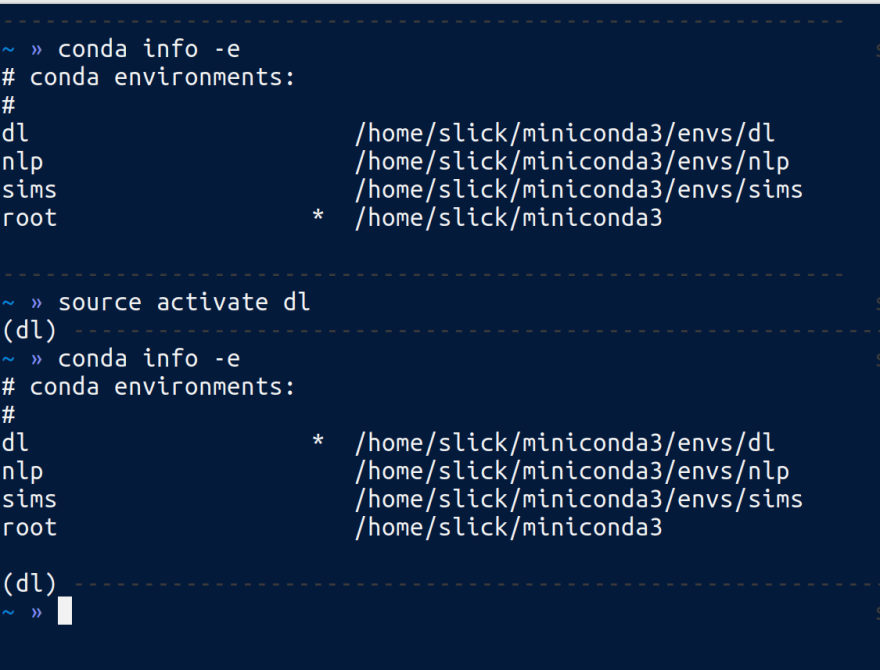 If you have animosity towards authoritarian open sourced, or just want to work with straight PyPI packages there is a new option in pure python. Pipenv is the new cool kid on the block for managing python virtual environments courtesy of Kenneth Reitz. Unlike Anaconda which is geared toward scientific computing, Pipenv is built with python development in mind, specifically networking. This means that it doesn’t come with any built in features but works incredibly well and is fairly simple to use plus it has a really pretty cli. Pipenv is built to be a replacement for pip and virtualenv to create a simpler work flow for creating environments in python.

Creating an environment is very simple:

Thats it! This creates a virtual environment and installs the packages that were specified. A few things to note here, unlike creating an environment in anaconda, there is no name to be set. The environment will just take the name of the directory that it is created in.

Pipenv will store package info in a file called a Pipfile that will look something like this:

You can also view package information by running pip list from inside an active environment.

Now that we have a few options to create and manage virtual environments we will demonstrate creating and using the environments to get a jupyter notebook installed and ready for data science action.

By running three commands we can get a jupyter notebook running in an environment that is ready for action.

That is all! Super simple, super concise and it ‘just works’ which will save your time for all the super fun data munging you need to do before you can run models or make pretty data pictures. Now any time you want to work in a jupyter notebook you simply activate the environment and launch it in your project of choice.

Similar to anaconda, we can create a Pipenv fairly simply.

Just two more steps but thats all we need to get up and running with pipenv. The nice thing about pipenv is that we can install it using pip.

Note - The biggest drawback of Pipenv is that the cli doesn’t allow global environment access which means you cant just run $ pipenv shell from anywhere, it will only work from inside the project folder. However, all the environments are located in a directory ~/.local/share/virtualenvs/ so to activate them from other directories all you need to do is run:

Now that we’ve covered the basics of setting up simple environments for data science, there are some other important topics to cover. One of them is sharing your environments with others so that they can reproduce your code and interact with your research. Another important tool to cover is the actual jupyter notebook itself. There are many underutilized features of Jupyter notebooks that make machine learning projects much simpler.

Once suspended, rgalbo will not be able to comment or publish posts until their suspension is removed.

Once unsuspended, rgalbo will be able to comment and publish posts again.

Once unpublished, all posts by rgalbo will become hidden and only accessible to themselves.

If rgalbo is not suspended, they can still re-publish their posts from their dashboard.

Once unpublished, this post will become invisible to the public and only accessible to Rick Galbo.

Thanks for keeping DEV Community 👩‍💻👨‍💻 safe. Here is what you can do to flag rgalbo:

Unflagging rgalbo will restore default visibility to their posts.