I love word cloud. As I have just started a site with jekyll I wondered how would it look to add a word cloud thumbnail to the list of post as a thumbnail and how hard would it be?

My first instinct was to see if there was a python package to build wordcloud. I know python quite well, and would definitely be easy to automate the generation of the images. And of course python has usually pretty much any type of module you can ever dream of, so felt like a good start.

A quick web search later and of course, there is a very nice and easy to use package already. Install into my anaconda setup was trivial with conda install -c conda-forge wordcloud.

Then generation of the picture is trivial and take one line: 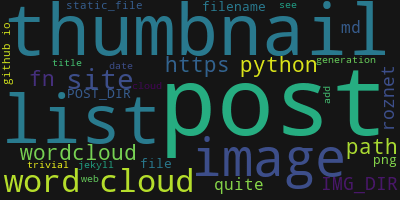 I set the img_dir to be a subfolder /assets/clouds in the side, et voila, the thumbnails were ready.

Next step was to figure out how to automatically add the image to the list of post. For that I had to find out a bit more about which liquid tag and filters were available.

I also wanted to make sure if the png didn't exist that the generation would just skip the image. I found out that there was a site.static_files variables that could help, I just had to iterate through that and see if the required image was found. Which resulted in the following code in my home.html template:

This turned out quite trivial to do, after a quick web search. As expected a list with thumbnail is quite a common occurence on the way. Just required a few lines edit to the _layout.scss file in the post-list class to specify to float the img under li and add a margin

The last piece was to automate the process of generating the word cloud images. Easiest way was to create a small python script and a make file to achieve that.
I created a new directory _bld in my website repo, and simple makefile

Once suspended, roznet will not be able to comment or publish posts until their suspension is removed.

Once unsuspended, roznet will be able to comment and publish posts again.

Once unpublished, all posts by roznet will become hidden and only accessible to themselves.

If roznet is not suspended, they can still re-publish their posts from their dashboard.

Once unpublished, this post will become invisible to the public and only accessible to Brice.

Thanks for keeping DEV Community 👩‍💻👨‍💻 safe. Here is what you can do to flag roznet:

Unflagging roznet will restore default visibility to their posts.