Can we improve the reliability of a system by employing various performance engineering techniques to different stages of the development process?

These approaches attempt to achieve better business cohesion, reliability and velocity benefits. To do this we can look at applying various methodologies from Performance Engineering using a Shift left and Move Right approaches that extend Traditional Performance Testing techniques

At its core, to understand an applications performance we need

Each area of performance within the DevOps model has its part to play. That is, they all relate in some shape or form to the principles around building, defining and maintaining a reliable system

Each Performance execution and analysis piece should look to be guided by the Engineering Efficiency, DevOps and Reliability principles that apply to software development 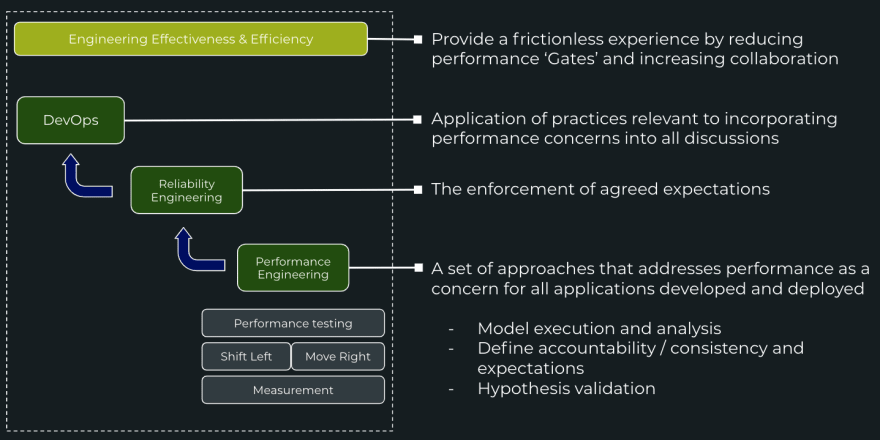 A look at Performance Engineering

We can do this by looking at adopting a left shift / move right approach that incorporates a cloud first performance automation approach. This can then lead to reduced feedback cycle (velocity increase) and bottlenecks / bugs being caught early on (reliability increase).

PE is all about applying process and strategies at each step of the SDLC, the following are example actions/options that can be applied within each vertical 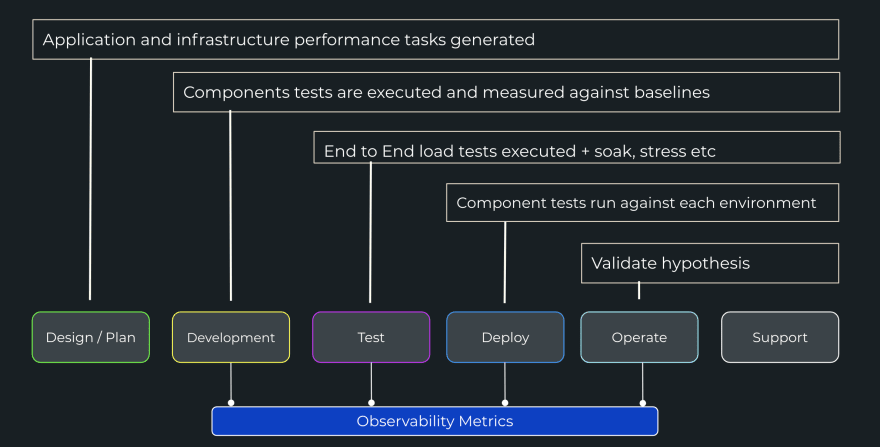 The idea being that performance is a consideration at each step in the software lifecycle, The captured metrics are gathered from Dev, Test, Deploy and Operations and used to refine the next cycle of performance

--> We can attempt to find this out using combination PE, RE and DevOps principles and methodologies

A "Move Right" approach extends testing out to include user feedback and metrics from your production environment. This can then be used to update the performance model that's developed as a consequence

The use of performance metrics from each environment (Dev/Test/Prod) are used to determine whether they are within SLO's limits.

Idea being we can understand and easily record local (component) and integrated(end 2 end) metrics to provide better performance transparency. These then would be compared to ideal state

Performance SLI implementations could include:

Could all be defined and compared using SLI's

A subset of the performance suite can be used to poke test (performance smoke test) the application after deployment. A degraded Performance run could then trigger a rollback

A balanced performance strategy that is applied at each stage of the SDLC, that uses guidance from RE principles provides a more well rounded verification process and in turn lead to a culture of empathy, encourage collaboration, reduce delivery cycle duration and mitigate the chance of deploying underperforming software

How To Prevent Secrets From Ending Up On Developers' Machines

Scott Griffiths
I'm an engineer passionate about all this reliability and automation
What was your win this week?
#discuss #weeklyretro
A Complete Guide to VS Code Extension Testing
#vscode #testing #webdev #javascript
Side Project Sunday! How's it going?
#showdev #sideprojects #discuss #watercooler

Once suspended, sgriffiths will not be able to comment or publish posts until their suspension is removed.

Once unsuspended, sgriffiths will be able to comment and publish posts again.

Once unpublished, all posts by sgriffiths will become hidden and only accessible to themselves.

If sgriffiths is not suspended, they can still re-publish their posts from their dashboard.

Once unpublished, this post will become invisible to the public and only accessible to Scott Griffiths.

Thanks for keeping DEV Community safe. Here is what you can do to flag sgriffiths:

Unflagging sgriffiths will restore default visibility to their posts.