The COVID crisis has affected King County (where I live) pretty significantly, and as a result, dampened my ability to network and interact with others. I consider myself lucky, because I personally haven't experienced any hardship further than not being able to go out to restaurants, which is very minimal.

Here's my illustration of this week: 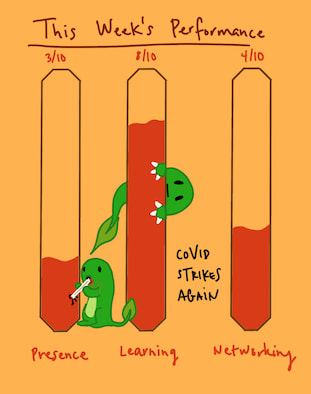 Overall: It was more or less was productive. Being forced to be in my house for multiple days did make me feel little bit crazy. Here's a quick synopsis of what I did. Items I will be talking about in further detail are bolded.

Working On Personae - Setting Up A Rails Backend API

Before I dive into what I did, a quick snapshot of what Personae is.

Personae is a text annotation tool that allows organizations to collect feedback on projects and pull out meaningful data from them using machine learning.

I suggested our team use Trello to split up our deliverables. After our kickoff meeting on Monday, I ended up taking responsibility to build the server of our web application!

My plan was to build a Rails API that could serve data to be consumed by the frontend.

The general flow of how this happened was:

I hadn't done much Rails in a while, and it was a good exercise to get back into the flow with the backend. I coordinated with Christian (the frontend person) to make sure the JSON I was planning on sending was structured properly for the client to receive!

When we connected at the end of the week, I presented the backend data as JSON, Christian presented the frontend view he had build, and the PM took notes and updated us on the work he was doing meeting with potential clients. Very cool stuff! We'll be connecting next week to set up the next sprint!

Working on Play It Forward

Play It Forward has been a blast to work on. Just as a recap on its purpose:

Play It Forward is a web application where nonprofits and volunteers can connect with one another through events, and volunteers are incentivized to engage through added elements of a game.

This week I was working on some rough front end views just to understand how we will be working with a new CSS library called Tailwind. I wanted to wrap up 2 basic views:

Jen (my collaborator on this project) spent the week trying to refactor one of my components into Typescript and also integrate the backend she built using GraphQL.

For some reason I can't seem to attach images, so I'll share those at a later time!

For next week, Jen and I will be swapping roles, and I will be learning GraphQL and Typescript, and she will be using my views as a reference to build our login/signup page using Tailwind. I'm excited to see how she does as well as learning a new web service methodology (as opposed to REST).

Preparing for The Long Haul

I'm beginning to think that this job hunt will be especially difficult considering some factors:

Considering that previous grads averaged a 3 month job acquisition in a normal economy, I'm mentally preparing myself to be ghosted more frequently for the next couple months!

My Simplified Game Plan For The Long Haul

Seeing as networking will be pretty much done remotely, and my online presence is pretty much based on my ability to network at this point, Here's my short laundry list of things to do for next week:

This will be tough for sure, but I was once told that people who work hard tend to be luckier than those who don't, so I guess I'll just do my best to be lucky :).

Good luck with your own endeavors,
Shawn

Logseq - Yet another knowledge base tracking tool?

Once suspended, shawnhuangfernandes will not be able to comment or publish posts until their suspension is removed.

Once unsuspended, shawnhuangfernandes will be able to comment and publish posts again.

Once unpublished, all posts by shawnhuangfernandes will become hidden and only accessible to themselves.

If shawnhuangfernandes is not suspended, they can still re-publish their posts from their dashboard.

Once unpublished, this post will become invisible to the public and only accessible to shawnhuangfernandes.

Thanks for keeping DEV Community 👩‍💻👨‍💻 safe. Here is what you can do to flag shawnhuangfernandes:

Unflagging shawnhuangfernandes will restore default visibility to their posts.