Hey everyone 👋🏻, today we are going to make a discord bot 🤖 which will send gifs according to the user in just 30 lines of code!

The way this bot will work is, if you write .gif happy then the bot will send a random happy gif.

What are we going to use to build this mini-project:

Now we just have to code it!

Before explaining the code, let me explain you the folder structure 👇🏻. 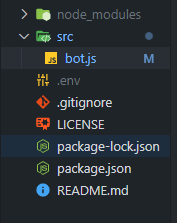 Your own discord bot 🤖 in just 30 lines of code!

Okay so the first and the third line of code are the import statements which can also be written as :

The second line of code is basically us initializing the client/user, which in this case will be our bot and the users themselves .

and the fourth line is importing the env package and configuring it, so basically .env files stores all your secrets, like your discord bot's token or your API Key, these things will not be uploaded on GitHub using the git ignore file.

Okay so in JavaScript there is this thing called addEventListner which helps us to react to certain events, like if a user clicks on something or double-tap on something a particular function should run.

In the same way here in discord.js addEventListner is more or less replaced by .on function.

All of the .on functions are called in regards to the client so we have to write client.on('event', callBackFunction). 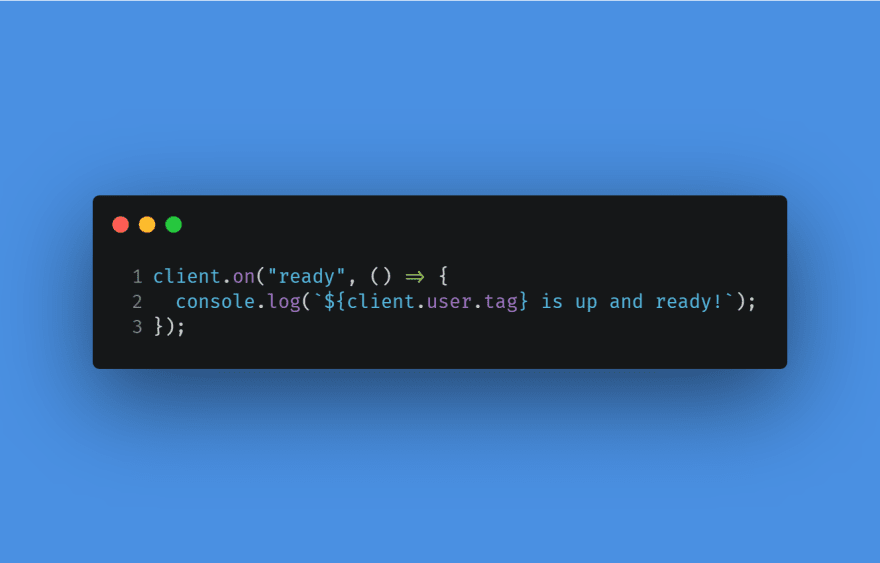 This basically means that, whenever the user is ready and logged in the console should log <Name of the Bot> is up and ready! and name of the bot is fetched by this inbuilt property known as .user.tag , which is to be called in regards to the client .

Now we have to make our bot login to the server. And for that we have another inbuilt method/function called .login .

So we can write : client.login(process.env.TOKEN)

Now you might wonder what is this process.env.TOKEN, this is the way we call variables from our .env file.
So let me show what is stored inside .env file. 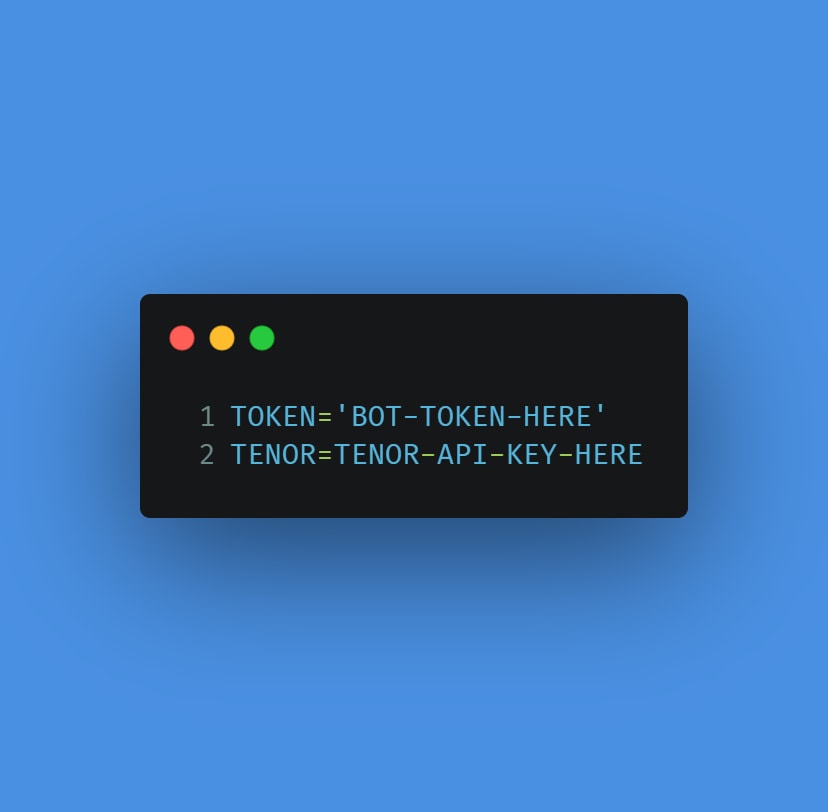 Here in this file, we have to put our bot token inside a pair of single or double quotes and our tenor API key (you can generate it from here)

For example if you want to call the tenor api key inside your bot.js file, you just have to write process.env.TENOR.

And you can make a try-catch block around the client.login() function, so if any error occurs, we can catch it and show it on the console. 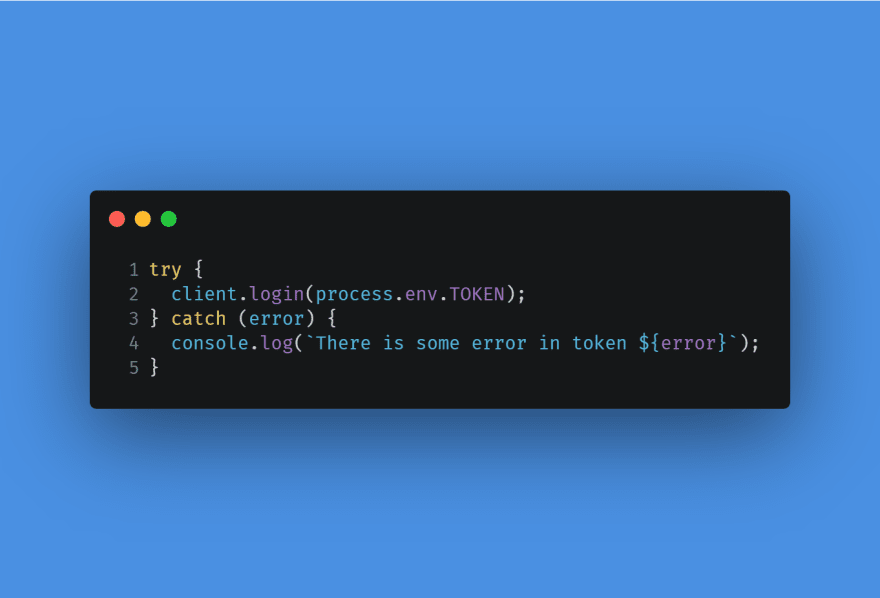 So as of now, we have our boiler plate code ready with us, which is 👇🏻: 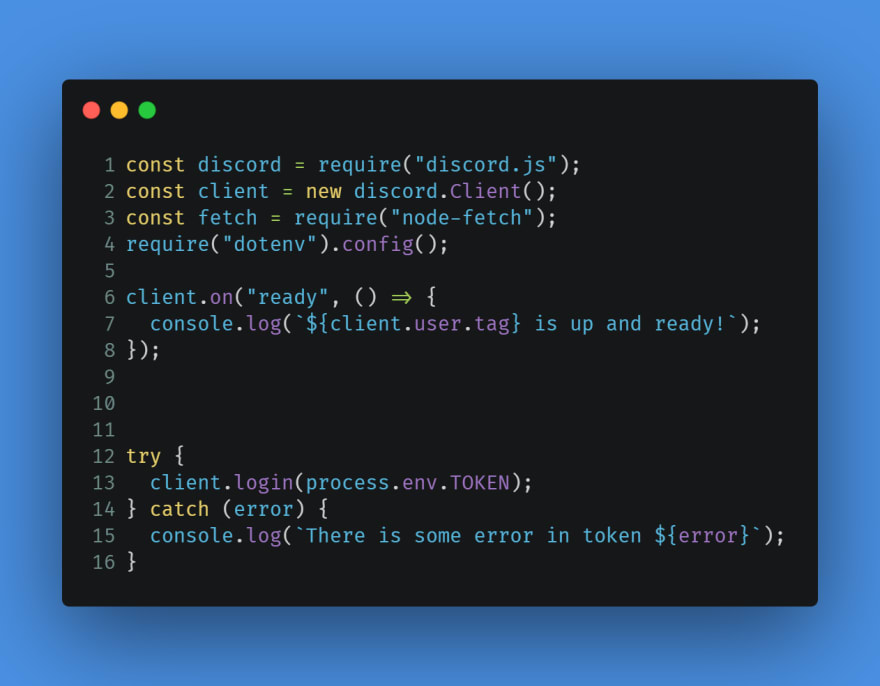 Let's code the main functionality of the bot now.

Now all the code discussed below will be in the reference to 👇🏻 this image. 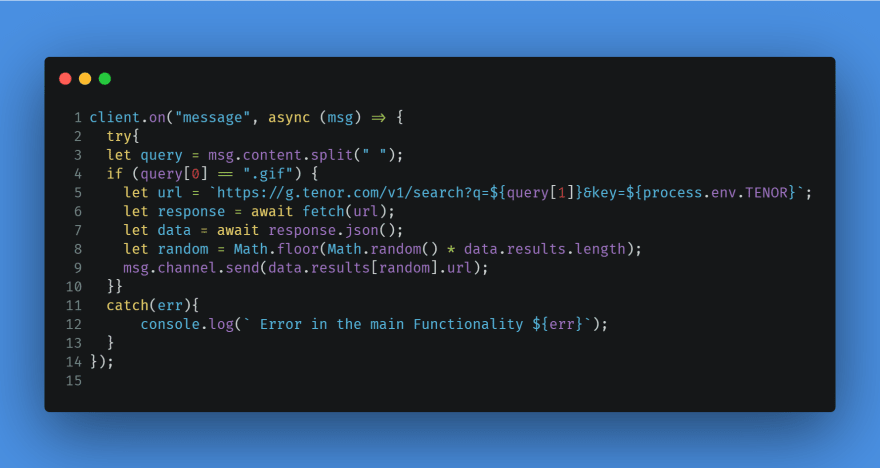 Thank you for reading the whole blog 🎉!! If you liked it do share it with your developer friends and feel free to comment and give suggestions.

Shreyas Pahune
Hey there 👋🏻, I am Shreyas Pahune a Full-Stack Web and an App developer who loves to write blogs.
All about Jamstack
#jamstack #javascript #api #markdown
An extensive guide to build your NPM package and publish it.
#javascript #npm #node #tutorial
Basics of Typescript
#typescript #javascript #webdev

Once suspended, shreyazz will not be able to comment or publish posts until their suspension is removed.

Once unsuspended, shreyazz will be able to comment and publish posts again.

Once unpublished, all posts by shreyazz will become hidden and only accessible to themselves.

If shreyazz is not suspended, they can still re-publish their posts from their dashboard.

Once unpublished, this post will become invisible to the public and only accessible to Shreyas Pahune.

Thanks for keeping DEV Community 👩‍💻👨‍💻 safe. Here is what you can do to flag shreyazz:

Unflagging shreyazz will restore default visibility to their posts.