Want some awesome facts to start your day or just want to learn something new or out here for some fun !

Well, in this blog I will be sharing a script that I did over a weekend just for fun (and for a side project 😉).

What I will not discuss here:

What is Web Scraping ?

How to use BeautifulSoup ?

How to Scrap ? That we will discuss !!

Final Result (Before diving into the steps)

We will be saving all the scraped quotes in a text file. That would look something like this

As we want to scrape the awesome facts, we are going to get that from Computer Facts

A look at webpage 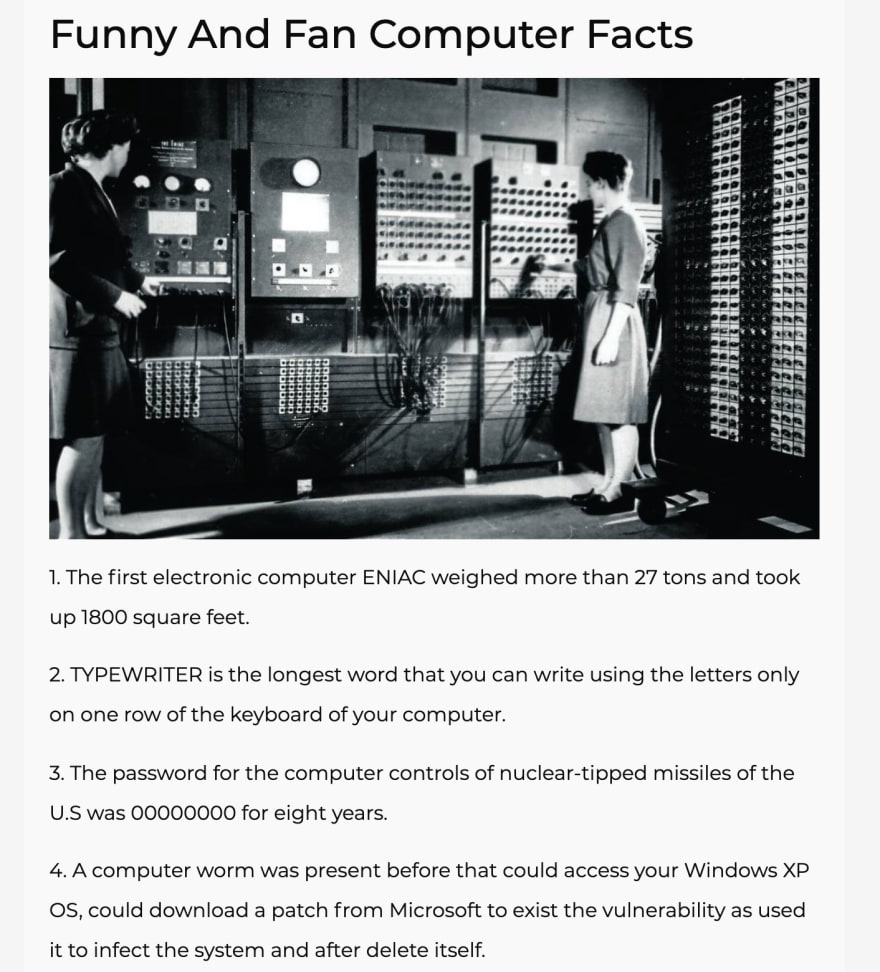 Now, we want facts like 1. The first electronic computer ENIAC weighed more than 27 tons and took up 1800 square feet., so we should take a look at its source page first and find where is this present, to get the pattern (we will use that pattern later to scrape these quotes).

As we can see on page source, the facts start from <p> tag on line 475 and there are several <p> tags that contains these facts. If we look further, we would find that there are a lot of <p> tags being used within the HTML. How would we differentiate our facts with other <p> tags ?

If you looked hard, then you know ! There is a unique descriptor where facts are present, each fact precedes a with number (0-9) followed by (.) and space. Hence, we have our pattern 😀

We can ignore all other <p> tags and take only that matches a particular pattern we identified. To match pattern, we will use regex module of python, re.

Hence, the pattern we identified is

Before doing the task of scraping, we need to import libraries and define some constants.

Why name the variables as QUOTES ? I had another script to scrape some great quotes and reused that same for scraping awesome facts. Need to know more about scraping quotes ? Visit this link.

Now, we have some constants to play with, we will use QUOTES_URL to get the HTML of the page and create a BeautifulSoup object to filter our facts.

We create a function get_bs4_obj that takes url a string type object and returns the required object bs4Obj.

With having bs4Obj, now it is possible to filter the HTML on <p> tags, we can achieve that using below functions

See how we used the List and Tag for type hints and BeautifulSoup as well. Type hints are not mandatory and are not checked by python, these are just for developers and know that Python will always be dynamically typed !

allP list contains all <p> tags available in HTML. We filter them using python's inbuilt filter function on the condition that, if text of any <p> tag does not have a pattern matching regex [0-9]+. then filter them out from allP list.

Pattern matching regex, we define that in function filter_p_tags, where we use re.match to match the occurence of our pattern in the given text. You can do that in get_p_tags itself, but I think it is better to have such task done in pure functions instead of making them in single function.

Store all relevent tags in variable allReleventP and return that (to be used by another function !)

Now, we will create a generator to yield the facts we need to save in a text file. We will be using allReleventP variable passed to the new function.

Here we are extracting text present in <p> tag. But wait !! We don't need preceding number, right ? That's why we are using re.sub to substitute it with empty string. Regex we used "[0-9]+\. ", it will take any number followed by . and a space.

We will use this generator in next section, inside another function.

Here is the function

We take global constants QUOTES_TXT_PATH and QUOTES_FILE_PATH to be used for writing to the file. We check if the directory exists or not (the folder where we will save our file). Then we open the file in the created directory (if it not exists).

Now here comes the use of generator, we call generator on each <p> tag that yields text present in it.

Now the script to execute the code

If you check now, the facts should be appearing in the file created funfacts.txt inside the folder /funfacts.

Well, that was it, if you followed this then you now know the gist of general process for web scraping and how to scrape Awesome Facts !

It was just a drop in the ocean full of different functionalities you can achieve with web scraping, but the general idea remains the same:

GitHub action where this script is used. Would love to hear your feedback on this as well.

Want to make a simple and awesome game from scratch ? Check PongPong

Thanks for keeping DEV Community safe. Here is what you can do to flag siddharth2016: