We had been using Microsoft Appcenter extensively as part of our mobile app development using Xamarin forms as it is the best bet for cloud services like build, distribution, testing for mobile apps. Also it provides diagnostic services like Crash report, analytics out of the box which helps in effective troubleshooting.

The one thing which was missing in Appcenter, or we thought it was until we found out was the inclusion of unit test cases in the build pipeline. We know that it's very much possible in Azure devops CI/CD pipeline by simply adding some code to your YAML file but since Appcenter uses more of a pre-configured pipeline with no or very less work to do for the developer, it was difficult to figure out. This search ended with the build scripts which can be configured as part of Appcenter builds.

Let's have a look at what build scripts are and how to configure the same in your Appcenter builds.

Appcenter, by default supports 3 type of build scripts which runs at different stages of the pipeline. - post-clone, pre-build, post-build.

post-build : runs after the build has finished and copied all the necessary
artifacts to the output directory. The post-build script will run
even if the build fails. Ideal place for publishing the output apk
or ipa file to any cloud server or any other repo other than
Appcenter.

Coming back to our scenario, We have xunit test cases written as part of our project and we wanted to ensure that all the test cases are passing before generating build artifacts, so the ideal place to run the test cases would be in the pre-build script.( Infact its a debatable topic, whether to run test cases in post-build vs pre-build. In post-build script, it didn't make any sense to me as why do you need an artifact to be built and copied to output directory and then coming to know that your unit tests are failing. Anyways, its your choice on where to put it.)

Below are the steps for configuring unit tests as part of appcenter pre-build. 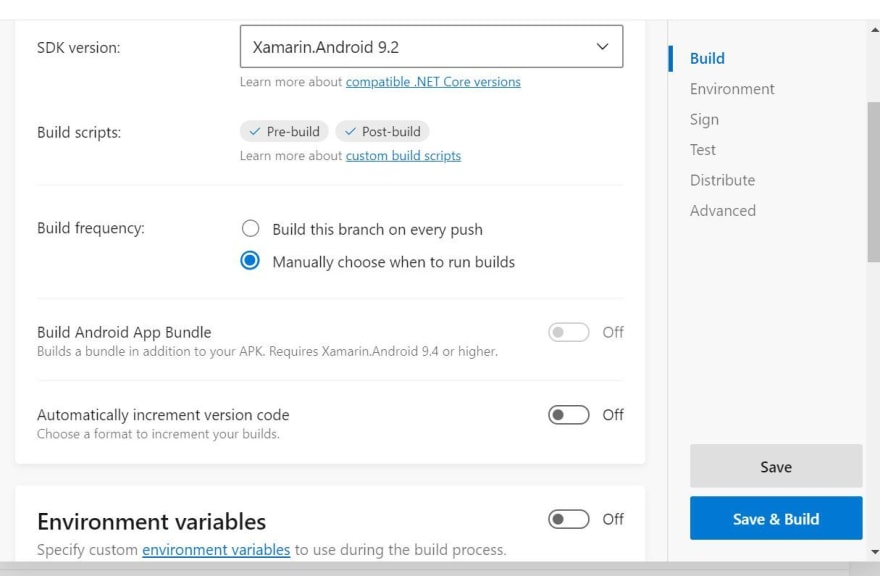 We are currently exploring on how to capture code coverage also as part of the build pipeline. Will definitely be posting it here once we find a solution for this as well.

On the whole, the capability to add pretty much anything as part of build scripts, Microsoft Appcenter would be the ideal and easiest service for configuring devops lifecycle for a mobile application.

If you have any questions or feedback - feel free to reach out at @sreejithvijayan - love to hear from you!

How to block Screenshots in your flutter app

Once suspended, sreejithvijayan will not be able to comment or publish posts until their suspension is removed.

Once unsuspended, sreejithvijayan will be able to comment and publish posts again.

Once unpublished, all posts by sreejithvijayan will become hidden and only accessible to themselves.

If sreejithvijayan is not suspended, they can still re-publish their posts from their dashboard.

Once unpublished, this post will become invisible to the public and only accessible to sreejithvijayan.

Thanks for keeping DEV Community 👩‍💻👨‍💻 safe. Here is what you can do to flag sreejithvijayan:

Unflagging sreejithvijayan will restore default visibility to their posts.