Nowadays almost every software engineer is using Git as a version control system for their projects.
There are a lot of GUI apps for working with Git, also integrations with IDEs and text editors.
I know engineers that are using Git only from their IDE. But no matter what, one day you have to use Git from the command line.

When I started using Git the first time I used it from the command line and at the beginning, I felt like a cool engineer working with the terminal.
So I decided to stick with this approach as usually from IDE it's not possible to do everything that Git is capable of.
Maybe a more realistic reason is that I never worked with rich IDEs with support for Git.
Although nowadays I use VSCode and sometimes I reach its integration with Git.

This is not a beginner guide on how to use Git, it's just my daily use of it.
If you are using Git from the command line or trying to switch from GUI to the command line some of these tips may be helpful for you.

Usually when I open a project first thing that I do is looking into Git history to see what was done and where I am in the commits history.
Git doesn't have a beautiful way to show the history and many engineers that I know are using GUI to see a clear picture of the history.
But if you don't use Merge commits even a simple git log is clear to understand.

My command for showing Git history is:

You can look at what all these arguments do at git-log docs.
Basically, it prints the history in this format: 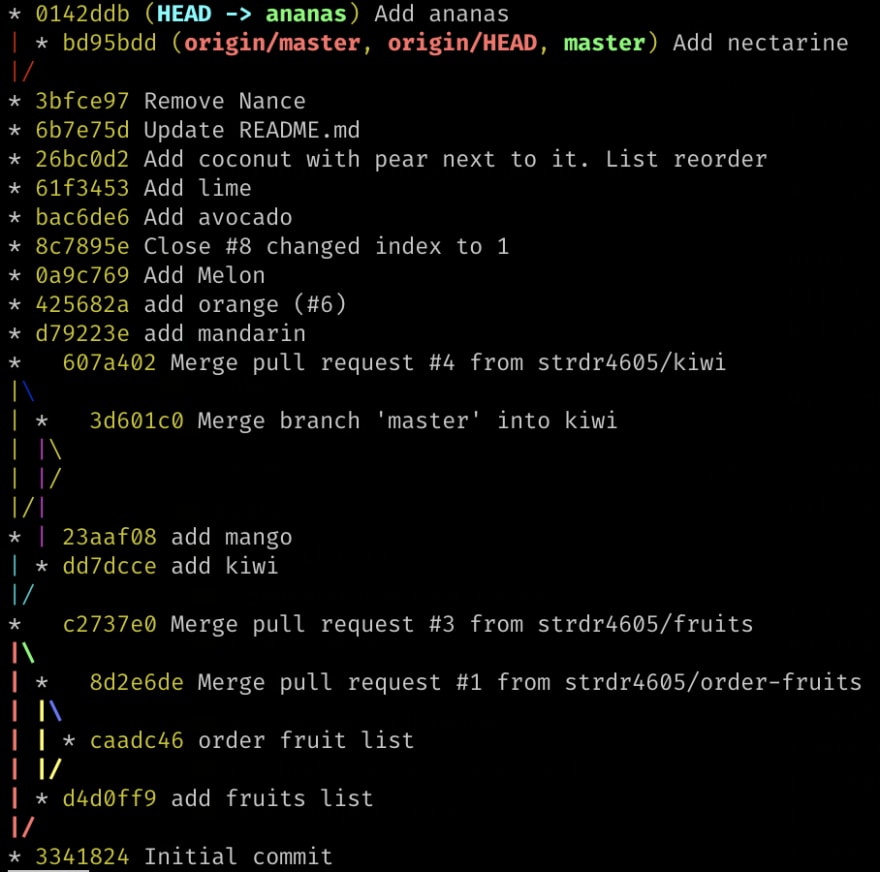 I can see my current location HEAD, also local and remote branches.

I run git log --oneline --all --graph almost every time with other commands that I use.

Of course, typing git log --oneline --all --graph every time takes a lot of time.
For these cases, people usually set Git Aliases.
But this means that you need to configure aliases on every new machine that you work on. You may use dotfiles.

I got used to doing a search using Ctrl + R where I type gra and git log --oneline --all --graph appears as a last used command.
I also use Ctrl + R for any other long command that I need again, so you may consider Ctrl + R over Git Aliases.

When I start a new task and need to get the latest changes from master I do:

I know people that do:

But I almost never run this command because I don't want to resolve any conflicts while merging and I don't care about changes in local master.
Sometimes I may run git pull -r origin master which does git rebase instead of git merge because I don't like Merge commits.

When working on a new task I create a new branch with:

In the name of the branch I follow this format

When I am ready to commit a change in the repo, I add my changes to stage phase using:

I know that some people are using git add . but this command stages only the file from the current folder,
so with you run this command in a child folder changes from the parent folder will be not staged for commit.

When committing I use:

To write the commit message nowadays I use Conventional Commits standard.
But to write a good description I try to stick to this approach; How to Write a Git Commit Message.

If I need to make a change to the previous commit I change the files and run:

I add --no-edit if I want the message to stay the same and --no-verify if I am sure of the change and don't want to wait for a long pre-commit check to run.
All this using Ctrl + R command to search for ame text (contains in --amend).

When I have done some dummy changes and I want to flush every unneeded change I run:

Before pushing, I check if there are no changes on the remote master. If the origin/master branch was updated I need to rebase on the new changes.

Also, I may change the history of the current branch using:

Sometimes I have rebase use cases where I need to use a powerful option of rebase command.
Let's say that I finished a task on branch topicA and created a new branch with commits for topicB.

Then I realize that topicB doesn't rely on changes from topicA and I should have started it from master branch.

Running git rebase master will not change anything because topicB is based on topicA which itself is based on master.
Moving topicB to start from master I run:

I remember corect command order by

Commands that I use rarely

I don't use git merge that often because I am more used to git rebase, but then I need I always use git merge --ff-only to not create a Merge commit.

Also git reflog to recover some changes from wrong hard resets or rebases.

I am not that good at Git as I wish I was but I know enough to resolve almost any git related problems.
I have friends that use Git in IDE and sometimes they ask me to help to solve a Git use case.
Also I now enough to search and understand any solution for a new Git use case that I encounter.

I will update this post with new changes to my Git usage.
Let me know what other commands do you use often!

Setting Up an Ubuntu 22.04 Workstation for Software Development and Content Creation

Dragoș Străinu
Full-time Hackathoner
How to gradually add an eslint rule
#development #eslint #javascript #node
How I found a bug in 2000 files
#development #bugs
NodeJS: How to test the npm package before releasing
#development #node #npm

Once suspended, strdr4605 will not be able to comment or publish posts until their suspension is removed.

Once unsuspended, strdr4605 will be able to comment and publish posts again.

Once unpublished, all posts by strdr4605 will become hidden and only accessible to themselves.

If strdr4605 is not suspended, they can still re-publish their posts from their dashboard.