First, let's take a look at my beautiful new terminal. 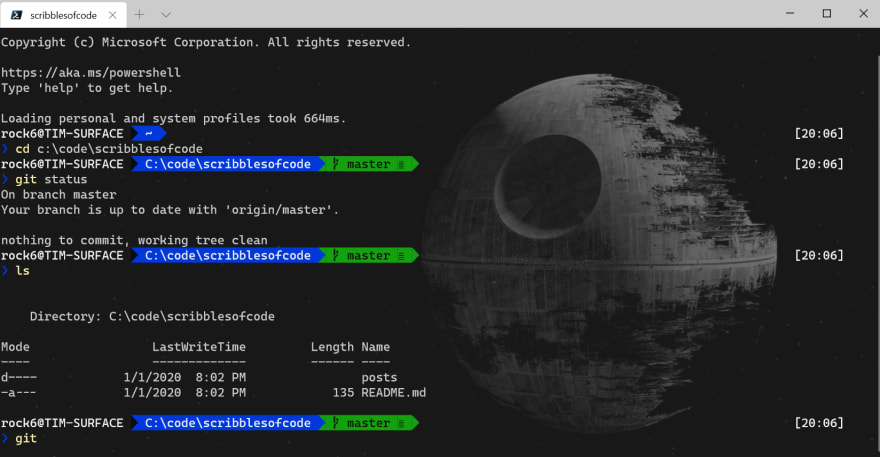 Now, if you're still here and want to learn a little about the new Windows Terminal and how to setup your own background image, keep going...

What is Windows Terminal?

The Windows Terminal is the brand-new, awesome Terminal built by Microsoft. It is open-source, it can run all your Shells (PowerShell, bash, etc.) in multiple tabs. I love it!

If you don't already have the Windows Terminal, install it now. It's free from the Microsoft Store app (that Store you probably never open...)

The Terminal is still in Beta (at the time of this post) but it is very stable and I've been using it as a replacement for my usual Terminal.

Launch the Terminal, click the Arrow at the end of the tabs, and choose Settings. This will open a .JSON file with all the Terminal settings in it. The format is pretty simple to work with.

The profiles are what we are interested in today. Each profile represents a specific Shell to connect to. I have three that were discovered on installation, Powershell, CMD, and Azure Cloud Shell. The default Shell is set with the defaultProfile value above the Profiles.

NOTE: The Guids are random and have no inherent meaning. They just need to be unique and one of them needs to be used by defaultProfile.

To change the Terminal's background you can set the following values for each Profile.

background changes the color of the Terminal's background. Use an RGB value in the #111111 format.

backgroundImage changes the image that is displayed in the background of the Terminal.

backgroundImageOpacity changes the transparency on the image, allowing some of the background color to come through. This is useful to make the image more subtle.

backgroundImageStretchMode controls how the image is displayed. Use "uniformToFill" to have the image fill the Terminal.

For my Death Star Terminal, I found a sweet picture of a Death Star (technically the Death Star 2...). I stored that image in my OneDrive, so that I could easily reference it from Terminals on all my PCs. Use the %OneDriveConsumer% environment variable to reference your OneDrive folder path.

Here are my final settings:

The Terminal will auto-update immediately without reopening, which is awesome. It now looks like this: 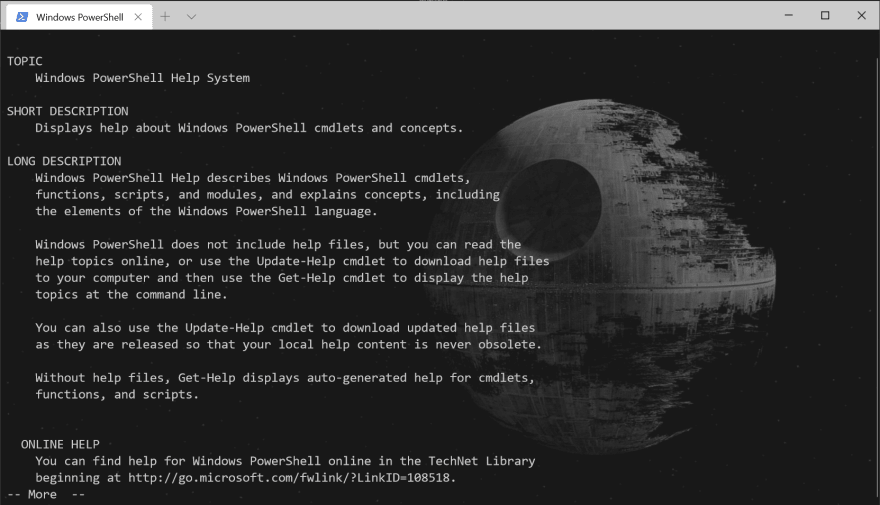 What About The Sweet Fonts?

Right. I agree, my fonts and Terminal UI look super sweet. I can't take credit for that, though, I used posh-git, oh-my-gosh, and a font named Delugia Nerd Font. To learn how to do this, check out Scott Hanselman's excellent post.

After applying Scott Hanselman's instructions I end up with this beauty:

So, it's that easy to create your own beautiful Windows Terminal. Try it out, if you use the Terminal all day, you might as well make it feel cozy.

Let me know what you think of my Terminal and show me what your Terminal looks like!

Be A Better Web Designer..

Once suspended, timothymcgrath will not be able to comment or publish posts until their suspension is removed.

Once unsuspended, timothymcgrath will be able to comment and publish posts again.

Once unpublished, all posts by timothymcgrath will become hidden and only accessible to themselves.

If timothymcgrath is not suspended, they can still re-publish their posts from their dashboard.

Once unpublished, this post will become invisible to the public and only accessible to Timothy McGrath.

Thanks for keeping DEV Community 👩‍💻👨‍💻 safe. Here is what you can do to flag timothymcgrath:

Unflagging timothymcgrath will restore default visibility to their posts.