Hello! This is my first blog post on dev.to

I make music and I code.

Putting out music and garnering attention to it requires me to wear multiple hats for a variety of tasks: branding, social media marketing, beat production, songwriting, mastering audio, shooting and editing videos, designing graphics, the list goes on...

Last Sunday (07/07/2019) I was refactoring some of my code on a project from jQuery to Web APIs. One thing led to the next, as they do the longer I am on MDN, and I came across the WebRTC (Web Real-Time Communication) standard and the YouTube LiveStream API documentation. This led me to Googling info about audio and video codecs. This finally led me to ffmpeg, an open source software used for audio and video processing. Sweet--I could start something from there.

I had used this software sparingly in the past, so I spent a few days experimenting with a few different image-to-video conversions in order to learn the basics. Here I've used ffmpeg to convert a sort-of timelapse of the BART (Bay Area Rapid Transit) train that passes nearby using 338 images taken throughout the day:

This inspired and led me to the project I'm working on now.

I've called this project animatemusic at this GitHub repository. My goal is to create a toolchain in order to expedite the creation of visuals for my songs.

How it Works Thus Far

The process is a bit choppy right now since I'm running the various responsibilities in series in a semi-manual fashion:

gentle is a forced-alignment tool that relies on kaldi which is a speech recognition toolkit. Forced-alignment involves matching a text transcript with the corresponding speech audio file.

The installation process for gentle was rocky, so the following tips and resources may be useful to you, should you choose to install it:

Once you have gentle running, give yourself a pat on the back and then run the following in your terminal, now outside of the virtual environment which used python@2.7.x:

The resulting file is in JSON format with the following structure:

If I can create an image for each video frame, I can render all of those image frames into a video using ffmpeg.

Right now, I have a single script block in my index.html which performs all of the logic around this process. Here's the minimal interface I've created thus far: 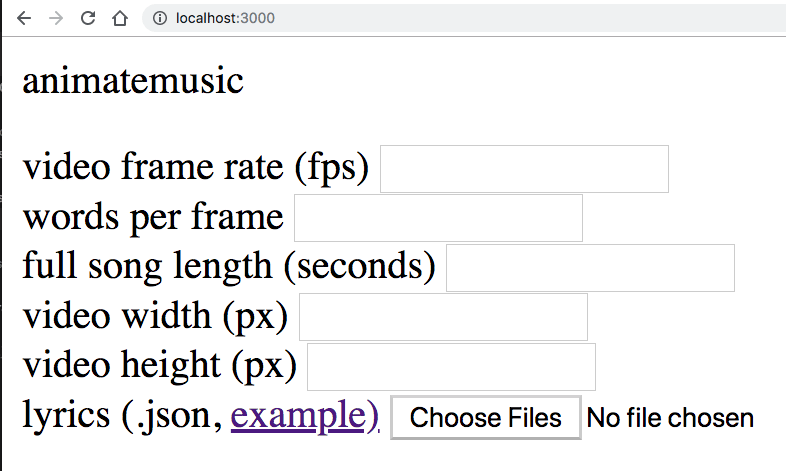 Here are the inputs to my script:

The following scripts must be loaded first:

The script I've written right now, can be seen in the repo's index.html. It's still a work in progress so please provide feedback. Here's how it works:

A few helper functions to break up the responsibilities:

Generating the Video From Rendered Frames

Now that I have an image file for each frame of the video, I can use ffmpeg to stich them together. I have found the following parameters to be successful:

This command generates a video at the output path, stiching the images together at a given framerate.

Now that I have the video for the lyrics, I can add the song audio (full song not just the vocals) using:

The first two input flags identify the video and audio files which will be streamed together using the video codec and audio codec specified.

Here's what I end up with!

It's pretty rough but the adrenaline rush was real when I saw it the first time.

I consider this a successful Proof-Of-Concept. Here are my next steps:

If you can help me improve my code, blog post, or my understanding of the context and concepts around anything you read above, please leave a comment below.

How we automated storybook documentation for our web components

Once suspended, vbaknation will not be able to comment or publish posts until their suspension is removed.

Once unsuspended, vbaknation will be able to comment and publish posts again.

Once unpublished, all posts by vbaknation will become hidden and only accessible to themselves.

If vbaknation is not suspended, they can still re-publish their posts from their dashboard.

Once unpublished, this post will become invisible to the public and only accessible to VBAK.

Thanks for keeping DEV Community 👩‍💻👨‍💻 safe. Here is what you can do to flag vbaknation:

Unflagging vbaknation will restore default visibility to their posts.