In this tutorial, you’re going to learn how to make React Native apps more accessible. Specifically, we’re going to cover the following:

Of course, we cannot hope to cover everything about accessibility. It’s a pretty big subject and it’s a continuous journey. There’s always something that you can improve in order to make the experience just a little bit more pleasant for a certain user. Instead, what we hope to achieve in this tutorial, is to take that first step into making more accessible apps.

To follow this tutorial, you need to know the basics of creating a React Native app.
The React Native development environment should also be set up on your machine.

We will be using React Native version 0.56 in this tutorial. We’ll also be using Yarn to install packages.

Before we proceed, it’s important that we all agree on what accessibility is, in the context of a mobile app. Accessibility or a11y, means making your apps usable to both normal users and users with disabilities. Any person can have one or more form of disability. That usually includes but not limited to the following:

Accessibility means designing your apps in such a way that it takes all of these disabilities into consideration in order to make the user experience pleasant for everyone.

What you’ll be building

We won’t actually be building anything from scratch. Instead, we’re going to make a pre-built app more accessible. Here’s what the starter app looks like: 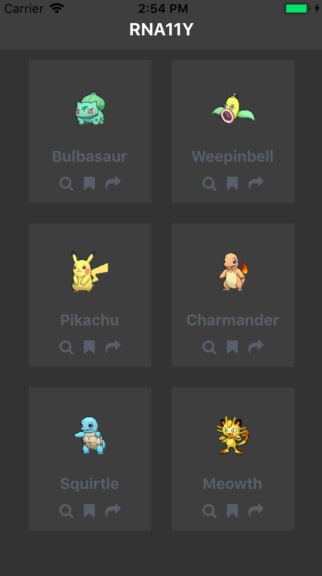 This won’t be how the final output will look like because we’ll also be taking design into consideration (though, only a little because I’m not really a designer).

If you want to follow along, clone the repo, switch to the starter branch and install the dependencies:

Designing apps with accessibility in mind

In this section, we’ll redesign the app so that it becomes more accessible. We will be using the dos and don'ts on designing for accessibility from the GOV.UK website as a guide. Specifically, we’re going to adopt the following dos from their guide:

Right off the bat, you can see that the starter app violates some of these rules. The app is already following a few, but we can still improve on it.

The starter app violates this rule because it’s using a dark color for its background. It’s not really easy on the eyes, so we need to update the app and card background:

Also, update the Header component to match. This is because the items in the status bar aren’t really very readable when using a dark background:

Once that’s done, the content should now be more readable.

Next, we need to make the buttons larger. This change is specifically useful for people with physical and motor disabilities, as they’re often the ones who have difficulty in pressing small buttons.

If you inspect the app right now, you’ll see that there’s not much space we can work with. So even if we make the buttons larger, it will still be difficult to target a specific one because there won’t be ample whitespace between them. Though we still have some free space between each card so we’ll make use of that instead.

In your Card component, include the Dimensions module so that we can get the device’s width. We’ll use it to determine how much width each card can use. In this case, we have two cards in each row so we’ll just divide it by two and add a padding. We’re also making the height bigger because we’re anticipating the buttons to become bigger:

Next, we can now proceed with updating the size and padding of the button:

At this point, each button should be huge and visible enough to click on.

Unfortunately, this isn’t really something that can be implemented all the time because of design constraints. If you check the app now, you’ll see that there’s not really enough space to accommodate labels for each button.

There is a solution, but we will end up giving up the current layout (two cards per row) for a one card per row layout. So the only feasible solution is to have a walkthrough for new users. This way, you can teach what each button is used for. I won’t really be covering how to do that, but there’s a good component which allows you to implement it easily.

Use good contrasts and a readable font size

In my opinion, the app already has pretty good contrast. But to be on the safe side, we’ll tweak it some more.

First, we have to differentiate between each individual card and the app’s background. We can do that by applying a darker background color:

Next, we need to differentiate between the card’s body and its contents:

Lastly, we need to make the text larger. While there’s no general agreement as to what font size should we be using to optimize accessibility, a few people seem to swear by 16px so we’re also going with that:

We’ve skipped the following because we’re already following them:

Once that’s done, the app’s design should be pretty accessible.

The previous section discussed mainly the visual component of accessibility. In this section, we’ll look at how to make the app more accessible for people who use screen readers.

For those unfamiliar, a screen reader reads to users what they’re currently touching on the screen. This technology is mainly used by blind or visually impaired people. If a screen reader is enabled, the user has to double tap in order to activate the intended action.

In order for a screen reader to be useful, we need to properly label all the relevant components that a user will most likely interact upon. In React Native, this can be done by adding accessibility props. Here’s an example of how we can add these props:

Let’s go through each of the accessibility props we’ve added to the Header component:

The next component we’ll update is the IconButton because it’s important that the user knows that those buttons we’ve added are actually buttons:

Lastly, we update the Card component so it passes the correct labels to each of the IconButton. We’re also making the Pokemon Image and Text accessible:

In case you’re wondering why we didn’t add the accessible and accessibilityLabel prop in the Pokemon label, it’s because the Text component is accessible by default. This also means that the screen reader automatically reads the text inside of this component.

In this section, we’ll take a look at four tools you can use to test the accessibility of your React Native app.

Testing accessibility while developing the app
In iOS, you can use the Accessibility Inspector tool in Xcode. Because it’s in Xcode, you have to run the app from Xcode. You can do that by opening the RNa11y.xcodeproj or RNa11y.xcworkspace file inside your project’s ios directory. Then run the app using the big play button located on the upper left side of the screen.

From there, you can select the running iOS simulator instance: 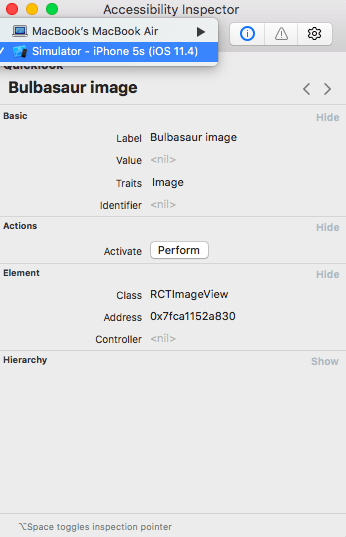 Once you’ve selected the simulator, click on the target icon right beside the drop-down. This activates the inspection mode. You can then hover over the components which we updated earlier and verify whether the inspector is reading the labels correctly: 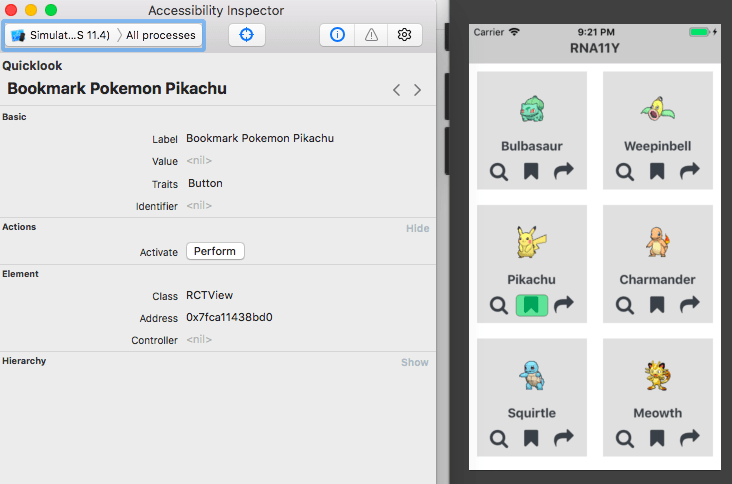 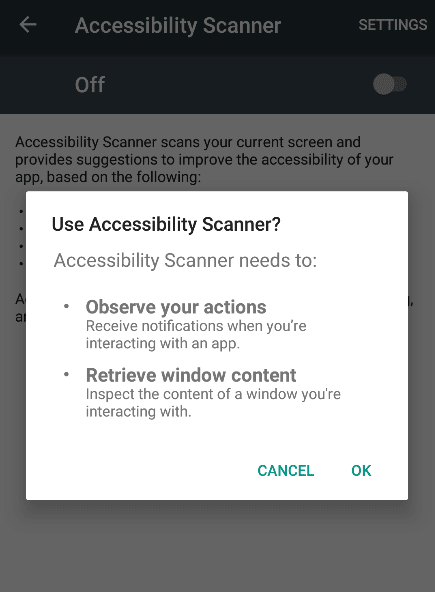 Once it’s enabled, switch to the app that we’re working on and click the floating blue button. This will scan the app for any accessibility issues. Once it’s done scanning, you can click on any of the indicated areas to view the suggestion: 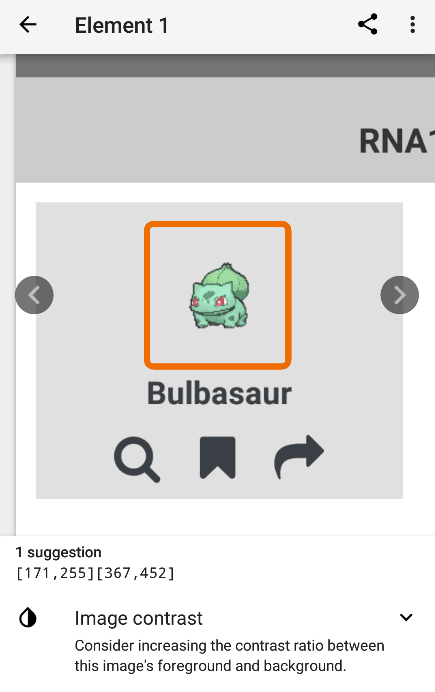 The easiest way to solve this issue is by making the card’s background color lighter. You can also try increasing the contrast of the image as suggested.

Interestingly, if you remove the accessibility props from the image and scan again, you’ll see that it will no longer complain about the contrast:

This can mean that the scanner only gets picky when you’ve marked a component as accessible. To test this assumption, try removing the accessibility props from the IconButton:

If you run the scanner again, you’ll see that it actually picks up on the issue:

As with anything, it’s always important to test things manually so you know the actual experience your users are getting. After all, accessibility is all about improving the user experience that your users get when using the app.

To test things manually in iOS, open Xcode and run the app on your iOS device. You can also do this from the simulator but that kinda beats the purpose of manual testing. You won’t really have an accurate “feel” of the experience if you’re just testing from a screen.

Once the app is running on your device, go to Settings → Accessibility → VoiceOver. From there, you can select the Speech menu to change the voice (I personally prefer Siri Female). You can also adjust the speaking rate. Adjust a little bit more from the mid-point should be fast enough for most people.

Once you’re done adjusting the settings, enable the VoiceOver setting then switch to the app. From there, you can tap on each of the accessibility areas that we’ve set to verify if it’s being read correctly.

To test in Android, run the app on your Android device. Once the app is running, go to Settings → Language and set it to your preferred language.

Next, go to Accessibility → Text-to-speech options and make sure the Default language status is fully supported. If not, you have to go to the language settings again and select a supported language.

The equivalent of VoiceOver in Android is TalkBack, you can enable it by going to Accessibility → TalkBack then enable the setting*.* Once enabled, switch to the app and verify if the labels are read correctly as you tap.

Here are some resources to learn more about accessibility:

That’s it! In this tutorial, you’ve learned how to make React Native apps more accessible to a person with disabilities. I hope that you’ll use the knowledge you’ve gained in order to make accessibility a part of your development workflow. Because all of your users deserve an equal or similar ease of use.

You can view the code used in this tutorial on its GitHub repo.

How to Use Module Federation with Re.Pack 3

Once suspended, wernancheta will not be able to comment or publish posts until their suspension is removed.

Once unsuspended, wernancheta will be able to comment and publish posts again.

Once unpublished, all posts by wernancheta will become hidden and only accessible to themselves.

If wernancheta is not suspended, they can still re-publish their posts from their dashboard.

Once unpublished, this post will become invisible to the public and only accessible to Wern Ancheta.

Thanks for keeping DEV Community 👩‍💻👨‍💻 safe. Here is what you can do to flag wernancheta:

Unflagging wernancheta will restore default visibility to their posts.