All my conclusions and findings are based on the official documentation provided by Vercel and Cloudflare and also based on my experience with both platforms.
I reserve the right for mistakes. Please let me know if you find any.

I've been using Vercel since the start of Moiva development. It helped to bootstrap and develop Moiva fast. I'm very grateful to the developers at Vercel, they do a great job there.

Vercel, in the essence, is a solution for automatic deployments of static websites to a network of data-centers around the world. Vercel doesn't stop there and provides a solution for Serverless Functions which works really great and smooth.

I thought that my findings could be interested to others. Here we go!

The high-level picture of how Serverless Functions requests are handled is different in Vercel and Cloudflare Workers. I think it makes sense to start the comparison with an explanation of how each platform works and highlighting the differences.

First of all, both platforms use a so-called Edge Network of thousands of servers distributed across the globe.

In Cloudflare Workers every Function during deployment gets replicated in every data center. Every request is load-balanced and routed to the nearest data center, which executes the Function and sends the response back to the user. 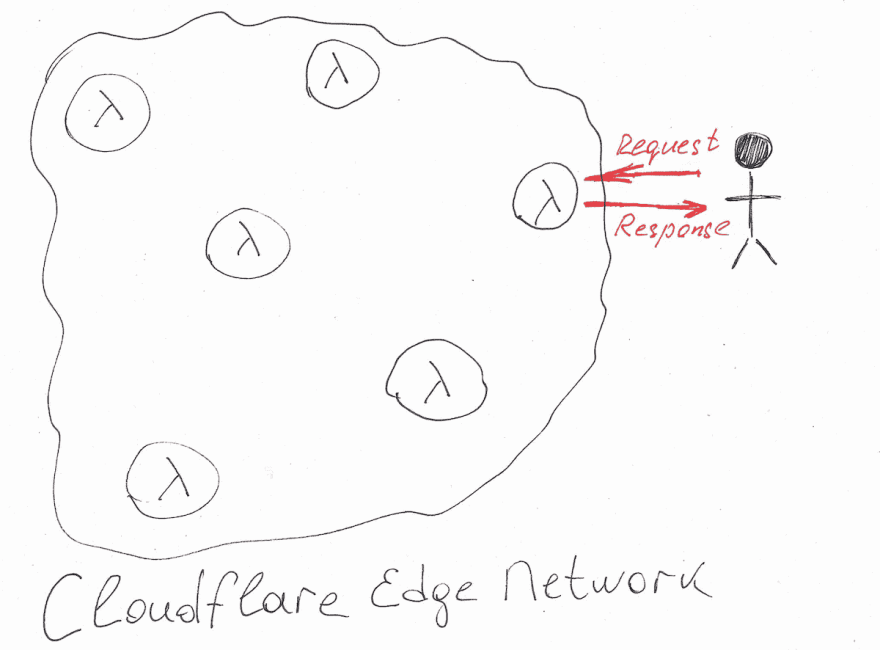 It's important to note here that Functions are executed on every request, even if the response has been cached. The cache works on a deeper more granular level:

Vercel doesn't replicate Functions across their Network in Free and Pro accounts - Functions can be deployed to one particular region only. Enterprise plan users can specify multiple regions for Serverless Functions.

Similar to Cloudflare, every request is being routed to the nearest data center. Here similarities end and the following steps are being processed:

Speed is an important characteristic of Serverless Functions. It is measured by the time it takes to deliver the response to the user.

One of its constituents is Travel Time. The less time the request spends traveling the better.

Cloudflare Workers, as we saw above, route every request to the nearest data center which processes it and sends the response back. Cloudflare says its Network spans over 200 cities in more than 100 countries. That guarantees the least Travel Time. 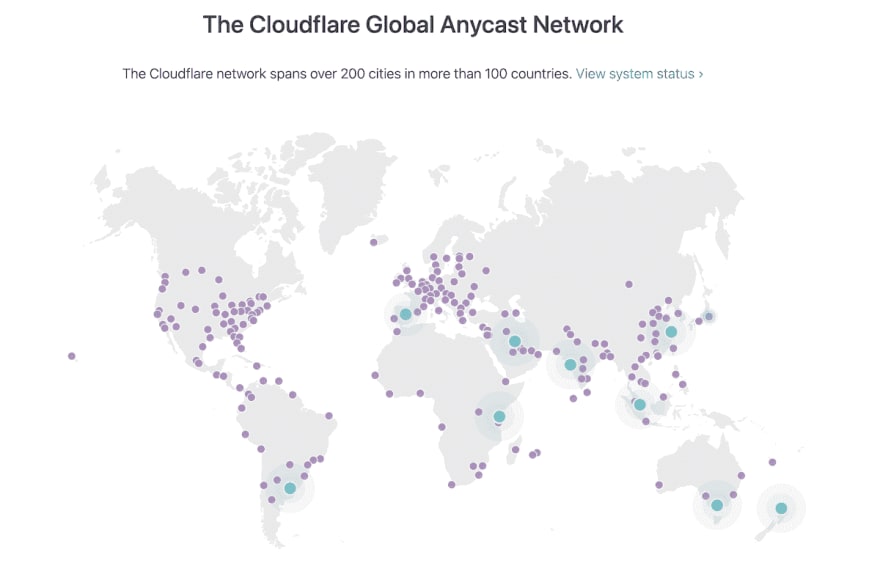 Vercel's Network is significantly less dense and spans less than 20 locations. It means that on average requests will spend more time traveling.
Moreover, requests will end on the nearest server only in the happy case of a pre-existing cache. Other times, as we saw above, the request will be forwarded further to the data center which contains the Function. It diminishes all advantages of having a global network of data centers.

Request/Function Execution Time is another major constituent of Speed.
It largely depends on if there is cached data already or not.

As was already mentioned, Cache handling in Vercel and Cloudflare is done differently.

In the absence of cached data, Execution Time depends on how fast the runtime environment is bootstrapped and on the available runtime resources like memory and CPU and if the Function is "HOT" or "COLD" (applies to Vercel only).

Cloudflare uses Google's V8 Engine under the hood and executes Functions in the context of V8 Isolates. Cloudflare claims that its approach is much more efficient than other Functions implementations and eliminates the cold starts of the virtual machine model:

Workers processes are able to run essentially limitless scripts with almost no individual overhead by creating an isolate for each Workers function call. Any given isolate can start around a hundred times faster than a Node process on a container or virtual machine. Notably, on startup isolates consume an order of magnitude less memory.

Cloud providers allow for a variety of different sized functions, but we have picked one that is aligned with making cold boot instantiation nearly instant for user-facing workloads (such as serving HTTP traffic)

DX and Ease of development/deployment

If you are using Vercel to deploy your website, then adding a new Serverless Function is as easy as adding a new NodeJS Express-like script (or written in a different language script) under /api folder.
Vercel Serverless functions also work in the local dev environment out-of-the-box.
Vercel achieves great Developer Experience (DX) here.

If you use Vercel for website deployment, but want to use Cloudflare Workers for Serverless (like me), then you need to learn and deal with many more things:

Cloudflare provides really great documentation with many easy-to-follow examples and "Starters" (GitHub repositories) for different use cases.
It also provides a Playground to preview, debug and develop your functions. I find it very helpful and use it frequently.

Cache in Vercel and Cloudflare Workers is always local to the Region (Data Center).

Vercel's cache configuration is limited to setting a Cache-Control header on the response of the Function. Vercel recommends here not to use Browser caching, but rely on Vercel's Network cache. Hence configuration comes down mostly to setting the cache time. Moreover, there is a bunch of restrictions regarding when the cache can be used (e.g. response status codes and request methods, request headers).

When providing a cached response, Vercel doesn't give a chance to the Function to execute and do any changes to the cached response or, for example, log the request.

With every new deployment Vercel automatically invalidates the Cache. Hence, if there is a need to invalidate the cache, developers need to redeploy their application.

Cloudflare provides a much more flexible and granular cache configuration and has a different mental model about how caching should work.

Most of the time Functions don't have heavy computations, they spend their time mostly awaiting the responses from subrequests.

I think that running a Function every time on every request is a very important feature that distinguishes Cloudflare Workers from Vercel. It allows you to log stuff to third-party services and have some analytics.

Cloudflare covers also the case when a Function does have heavy computations. Developers have access to Cache API to store Function responses and use it in future requests. Developers are free to define how and when to cache, whet to use and when to delete the cached value, free to modify the cached value before sending the response. Cloudflare provides good documentation and examples to start from.

Cloudflare Serverless Functions have a really nice distinct feature - they have access to a global, low-latency, key-value data store. Changes to that store are propagated to all other edge locations and become globally visible. That store doesn't replace a database but works nicely in some cases. I think of it as a globally available Cache. That store can also be prepopulated manually (via CLI interface) or during deployment. Developers can define a lifetime for values there to make sure they are automatically discarded at a certain moment.

Cloudflare supports only one runtime - Chrome's V8. Hence, it supports natively JavaScript. For many languages like Kotlin, PHP, Python it's possible to compile programs to JavaScript. So developers can write Functions in those languages as well, they just need to have a compilation to JavaScript step.

Cloudflare doesn't stop there and provides support for Web Assembly as well. It means that also compiled languages like C, C++, Rust, and Go can be used to write Functions.

Cloudflare has built-in support for scheduled invocations of Functions.

There is often a need to communicate to 3rd party services in a non-blocking way - you send a Response to the user and, in parallel, send data to some 3rd party services, for example, gather some statistical data.

The problem with Serverless Functions is that their lifetime is very limited and it might happen that the runtime shuts down before it handles the communication.

Cloudflare provides a waitUntil() hook to notify the runtime to wait for tasks that run longer than the time it takes to send the response. It is used, for example, to write data to Cache.

In Vercel's Functions, I tried to set up logging errors to Sentry and logging data to some database, but it worked unpredictably - sometimes it worked, sometimes it didn't. I also got strange errors in logs. It took me time to realize that the problem was that the runtime stops working once the Response is sent.

It is important to note that Serverless Functions, even while the underlying container is hot, cannot leave tasks running. If a sub-process is running by the time the response is returned, the entire container is frozen. When a new invocation happens, if the container is re-used, it is unfrozen, which allows sub-processes to continue running.

I couldn't find any workaround for such a problem.

Another problem that I found with Vercel is that you can't really log all the requests to your Function and build analytics on top of it because Functions are not executed in case there is a cached response for the request. I couldn't find a solution for it. There is no such problem with Cloudflare because its Functions get always executed on every request.

Cloudflare Workers are free to all, but subject to some limits, mainly reads/writes to Key-Value (KV) storage, limited KV storage (1 GB) and also CPU runtime limited to 10 ms.

Bundled plan for a minimum charge of $5/month includes everything that is in Free, plus increased CPU runtime (50 ms) and access to increased KV storage and reads/writes. The final price is defined by the real usage.

Vercel's free plan is generous in terms of available resources (except for 1 region limitation), but it is restricted to non-commercial usage only.

All plans are subject to Vercel's Fair Use Policy.

Once suspended, aantipov will not be able to comment or publish posts until their suspension is removed.

Once unsuspended, aantipov will be able to comment and publish posts again.

Once unpublished, all posts by aantipov will become hidden and only accessible to themselves.

If aantipov is not suspended, they can still re-publish their posts from their dashboard.