When we have many environments (development, quality and production) on AWS and we separate in different VPCs or AWS accounts, we can have a Transit Gateway; however, when we require an on-premise scenario using Direct Connect with less than 1GB to Transit Gateway native is not supported but, in the following description we’ll see an option of how we can solve it applying the mentioned services with AWS Direct Connect of 100Mbps.

In the next scenario we are using a telecommunications provider that offers connections lower than 1GB on AWS Direct Connect.

AWS Transit Gateway “A transit gateway is a network transit hub that you can use to interconnect your virtual private clouds (VPCs) and on-premises networks. As your cloud infrastructure expands globally, inter-Region peering connects transit gateways together using the AWS Global Infrastructure. Your data is automatically encrypted and never travels over the public internet.” 2

SOPHOS “Sophos XG Firewall is the only network security solution that is able to fully identify the user and source of an infection on your network and automatically limit access to other network resources in response. ... Using Security Heartbeat, we can do much more than just see the health status of an endpoint.” 4 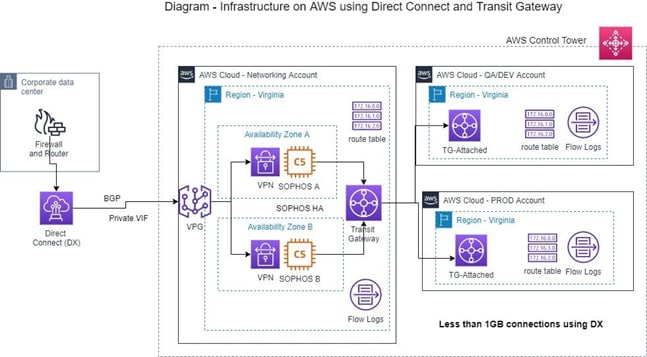 In the route table of VPC and AWS

Previously, the VPCs that we will use from the three AWS accounts were associated with the Transit Gateway, so now, we only must modify the routing tables to go through Transit Gateway.

At this point, we have a solution created and configured using AWS Direct Connect of 100Mbps with AWS Transit Gateway.

Once unpublished, this post will become invisible to the public and only accessible to Víctor Pérez Pereira.