This post was made on mac, works also on Linux, for windows you might want to use scheduled tasks instead.

Hey, in this tutorial I will explain how to automate stuff by running a script at a specific time on your computer using the magic of cron jobs. I'll take the example of cleaning your download folder, but you can be creative and go crazy with this!

Also, note that I'm using python as an example because I think that it fits this purpose well, but you could use any language!

A Cron Job is a command specific to Unix-like systems (e.g. Linux or macOS) that allows to schedule future tasks to be repeated at a certain interval. Very useful for automating things on your server (such as a CI pipeline for example), it can also be used to automate boring things too.

These intervals are coded following this scheme: 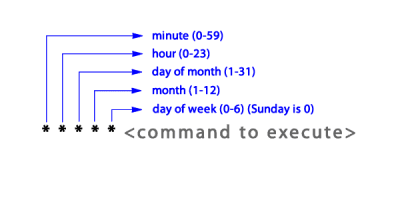 These commands can be very customizable, go to Crontab Guru to play around and find you perfect interval.

So as an example I made a python script that looks for file that haven't been modified since three weeks and deletes them, it also shows a desktop notification when running.

If you want to do the same copy this file and put it in your download folder. It works on mac, but could easily be modified for linux (or windows).

Please also note that Python isn't my main language, I just use it for small scripts. 😅

Once you have downloaded this, go to your command line and type:

This will open a text file in the nano editor. Then write:

This will automate the script and run it every 4 hours at 00 minutes. If you want to add more scripts to run, just add line and writ another command! Once you're done hit control+O and enter to save and control+X to exit.

And here you go, the scripts is running without you needing to do anything:

And here we are, you know everything you need to start automating the boring tasks on your computer! Here my example was pretty simple, but using more complex scripts and a bit of networking you could do crazy things, like automating your whole file system, organizing your mails (using GMail's API), and many other things!

This is my first tutorial ever, so please feel free to leave a constructive comment on what I could have done better for the next ones.

Paul Bricout
What is your favorite way to learn?
#discuss
When can you declare yourself a Full-stack Dev?
#discuss
+20.000 Developers Rename the Wireless Mouse to Hamster - Help Us!🐹
#beginners #tutorial #programming #productivity

Once suspended, brumor will not be able to comment or publish posts until their suspension is removed.

Once unsuspended, brumor will be able to comment and publish posts again.

Once unpublished, all posts by brumor will become hidden and only accessible to themselves.

If brumor is not suspended, they can still re-publish their posts from their dashboard.

Once unpublished, this post will become invisible to the public and only accessible to Paul Bricout.

Thanks for keeping DEV Community 👩‍💻👨‍💻 safe. Here is what you can do to flag brumor:

Unflagging brumor will restore default visibility to their posts.