In the previous article, we saw what is Docker, how containers are useful as a new devOps trend, and we learnt the difference between containers and images, and we also learnt about the Dockerfile.

The first thing we will do is to have a basic SpringBoot based application that we can dockerize. For that purpose, we can use the basic application that comes with Spring scaffolding when using the Spring Initializr in IntelliJ, and we will add a very simple endpoint, that will just return a greeting message in JSON format.
In case you do not have Spring Initializr, it doesn't really matter, as long as you can expose an endpoint and query it via either the mockMvc test object or a tool like Postman.

For reference, here is our application package structure: 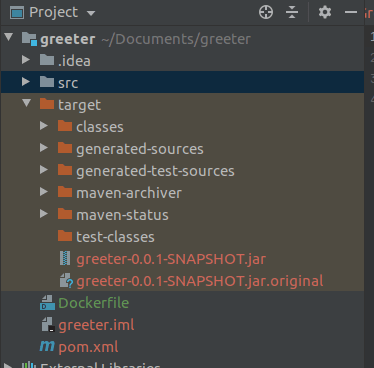 We can notice that the Dockerfile is placed at the root folder of the whole project. This will be the file used to control all the details of our image, its specification.

Then, the file will be used to create a Docker image, and, from that image, once it's effectively running, we will have our container.

So we build our image from a base image from Java 8 openJDK, then we copy the jar file (that needs to exist in our local machine at the same folder level as target and the Dockerfile itself) from our local system into the container root directory.

Then we expose the port 8080 from the container, to be available to the outside. This is the same port as the SpringBoot service, otherwise the container won't know where the service is running.

Finally, we just call java to start our service from the JAR we just copied into the container from our local machine. This means that when starting a container from the image built through this Dockerfile, we will effectively start the SpringBoot application.

The Dockerfile allows us to specify what is required to build an image.

docker-compose is a command that allows to specify and start multiple services comprised of many Docker images together, in a coordinated way, while allowing us to specify images to use for which service and ensuring that services are started correctly. It allows also to define environment variables that are exposed as such to the running container.

Let's assume our application required a username and password authentication in our endpoint. In order to define these variables, we can write a docker-compose.yml file, which we place at the same level as the Dockerfile and there we can specify from which Dockerfile to build the container, or which image to use (or both for local builds and using remote images) as well as which services the composition of containers will use as well as the environment variables needed.

A simple docker-compose.yml could be:

We define a service called web that is built from the Dockerfile in the current directory, exposes port 8080 to the outside and the service running in the container is in port 8080 as well.

Then we define environment variables available to our service, just like we define in an application.properties file or a shell.

To use this file to start a container, we simply do:

Which will use the compose file to build and instantiate our container and start the service configured with that environment.

-d ensures the container keeps running in the background and up starts it.

Compose allows developers to pull an image locally on their machines and run it and test it locally, which is very useful.

We saw what docker-compose is, how it helps developers testing certain functionalities and isolates concerns in a controlled environment and we saw what is needed to package a SpringBoot application with Docker. Stay tuned for more!