The Challenge
While I was at Intellectual Apps, we built software solutions, and in creating solutions for our clients we frequently get to build web and mobile apps within a single solution. This often means that we have a single API gateway for all the apps to communicate through. Over numerous clients/projects/products we started to notice a lot of repetition in the modules we built into software solutions, so naturally, we sort to find a way we could share functionality across solutions in an easy way and this lead us to start experimenting with microservices.

In building microservices-based solutions, as the name suggests, one ends up having several independent services working together as part of a single solution. This posed a specific challenge for us as we now had to make the user-facing apps do a lot more work in composing data from numerous services. So we took a step back and after some brainstorming, we realized that we had several other problems which presented themselves in two forms:

These scenarios created the following specific challenges for us:

Having all apps communicate through a single API gateway.
Given that the data consumption patterns of mobile apps are not the same as web apps, having all the apps share a single API gateway meant that the mobile apps often got more data than necessary when calling the same endpoints being used by the web application. For instance, when returning data to show the details of an item, the web app has room to show way more details than a mobile app can. So when the mobile app calls the same endpoint it simply gets more data than it can possibly display on a small screen which means a lot of the data never gets displayed immediately.
With all apps communicating through a single API gateway, the codebase got bloated. Many at times this was due to the face that checks were put in place at the API gateway level to determine which app makes the call just so that app-specific things could be done.

Having apps communicate with multiple services.
The major challenge with this approach is the extra processing that mobile apps had to do in order to compose data coming from multiple independent services in addition to the numerous network calls that have to be made. The immediate effect of this is the drain on battery life.

Enter the BFF
After conducting some research we came across the Backend for Frontend pattern and the motivation for us considering this was to enable us to operate in a more agile fashion. The approach was popularized by Sam Newman, the author of Building Microservices. Sam Newman talks about his experience working on a SoundCloud project which faced challenges similar to ours and how he and the team there applied this approach to address the challenges.

We adopted the BFF approach and applied it to our projects and this made our architecture look as follows: 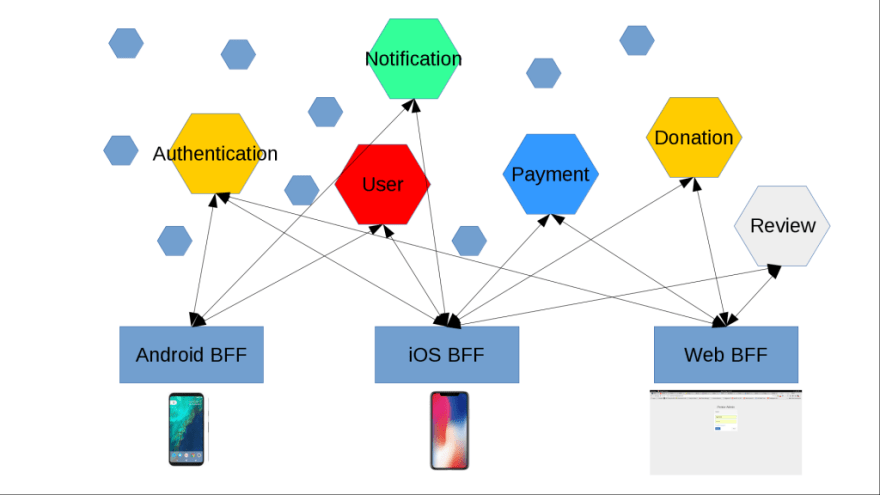 Apps communicating with specific BFFsThe BFF pattern is a technique where a dedicated layer serves a specific front-end platform. It can easily be seen from the diagram above that each platform gets a specific layer that performs the following functions:

Having BFFs perform the functions listed above means that:

A Little More
Typically the front-end team should maintain the BFFs as these layers are technically extensions of the apps they work on. Doing this will let your front-end team iterate faster as they won't have to communicate with another team, supposing the BFF is maintained by the back-end team.

It may be argued that there will be duplication of code across BFFs, yes, this holds true but the trade-off here is having bloated code in a single API gateway. We even go to the point of having separate BFFs for Android and iOS platforms as this lets us focus specifically on one platform.
It also goes without saying that with the BFF approach, there will be more codebases to maintain.

That's it and I hope you find this article useful and consider using this pattern.

Every Day Docker Commands You Need To Learn

Effortlessly manage configuration data in your Node.js microservices with nconf

Bulama Yusuf
Currently running a SaaS company https://facilitihub.com. I am interested in cloud and mobile technologies.
5 Life-Changing Lessons I Learned From Being Laid Off That Will Put You Ahead Of 97% Of People
#beginners #productivity #motivation #codenewbie
Defect life cycle in API testing ⚙️
#beginners #api #codenewbie #productivity
What was your win this week?
#discuss #weeklyretro

Once suspended, bulsyusuf will not be able to comment or publish posts until their suspension is removed.

Once unsuspended, bulsyusuf will be able to comment and publish posts again.

Once unpublished, all posts by bulsyusuf will become hidden and only accessible to themselves.

If bulsyusuf is not suspended, they can still re-publish their posts from their dashboard.

Once unpublished, this post will become invisible to the public and only accessible to Bulama Yusuf.

Thanks for keeping DEV Community 👩‍💻👨‍💻 safe. Here is what you can do to flag bulsyusuf:

Unflagging bulsyusuf will restore default visibility to their posts.