I can't believe it's finally here. I was reflecting today that this time last year, I had started learning to code a little bit of JavaScript on Grasshopper App and today I am submitting my final project at Flatiron School. Let's jump in.

I came about this idea when talking with my husband. He tells me that I need to get his grandmother's recipe for one particular chicken dish that he likes from his mom. I had said that I'll just copy it from her notebook the next time I see her. I was hesitant about asking my mother-in-law for recipes through a text message because she would send me pictures of these recipes that were very hard to read. I would rather just copy it down myself. It dawned me that I could make an application that keeps track of family recipes and the idea grew from there.

It started out as a simple application where a user can submit recipes. My potential for this will be to create a social media type platform where users can share family recipes and users can scroll through a list of recipes and comment on them. I didn't quite get around to implementing commenting on recipes for this project but I would like to add this feature in the future. I ran into a few roadblocks so I'd like to highlight three of them. The three roadblocks I want to highlight are the following:

The last roadblock was a particularly tough one and it made me feel really accomplished when I found the solution. I will touch on these roadblocks and elaborate on what I did to achieve the solution.

I wanted to build a navigation bar so I built it using react-bootstrap. I also wanted it to be dynamic where it would render different links when a user signed in. I used a conditional to render different results and stored it inside an arrow function called renderNavbar. 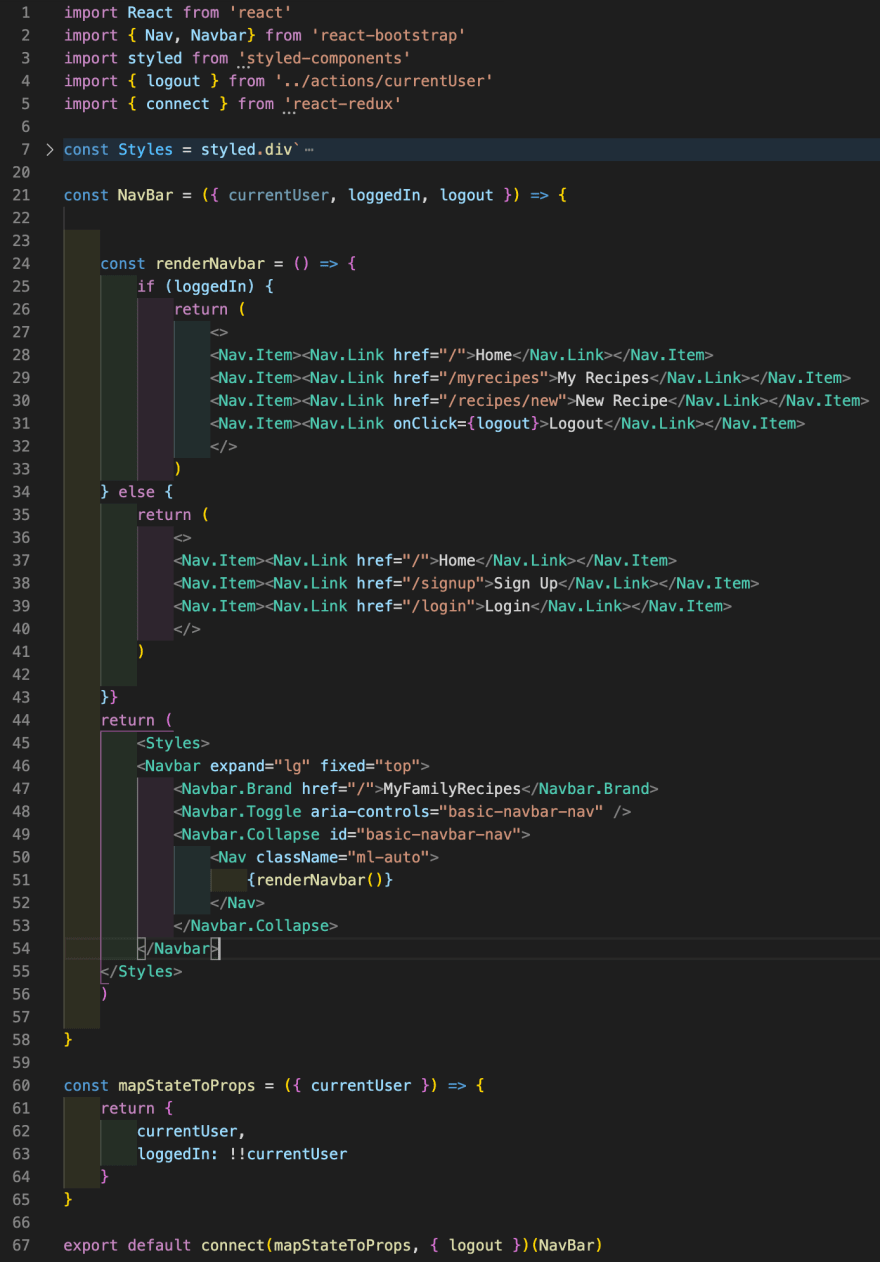 I then pass in the state of current user from my Redux store on line 60 and set it to a boolean value using !!. When a user is logged in, they should be able to view the recipes they've added, add a new recipe, and edit their own recipes. It also shows a logout link when a user is logged in and when they log out, it will show a sign up and log in link.

In order to fix the first roadblock, I had to understand the second roadblock first. The example I will use for this will be the currentUser reducer. The currentUser is a reducer in the Redux store. I utilized Redux Thunk to make fetch requests to my Rails API to get the current user stored there. First, I have a file called store.jsx that stores of my reducers and combine them together with combineReducer like so... 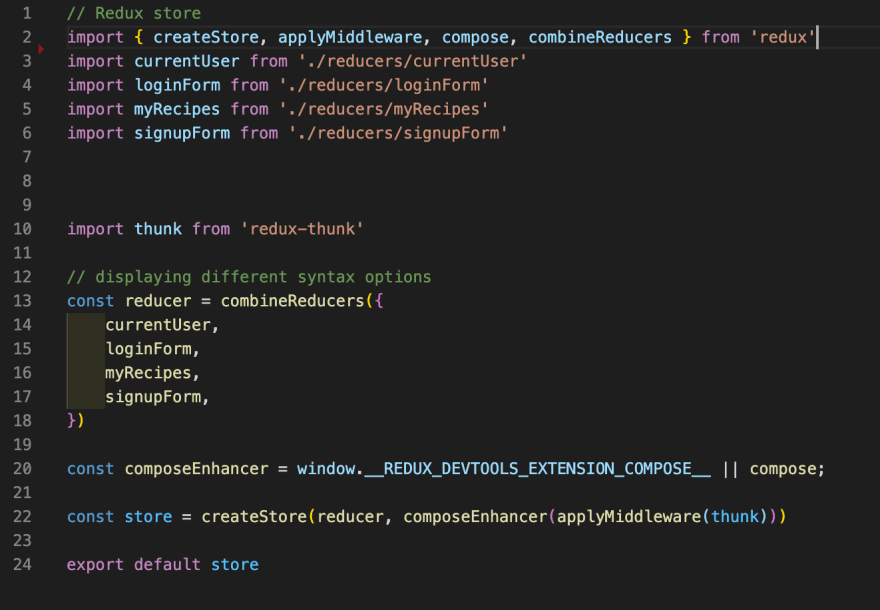 I made an asynchronous action creator inside my middleware folder called actions and make a fetch request to a custom action inside my SessionsController in my Rails API. 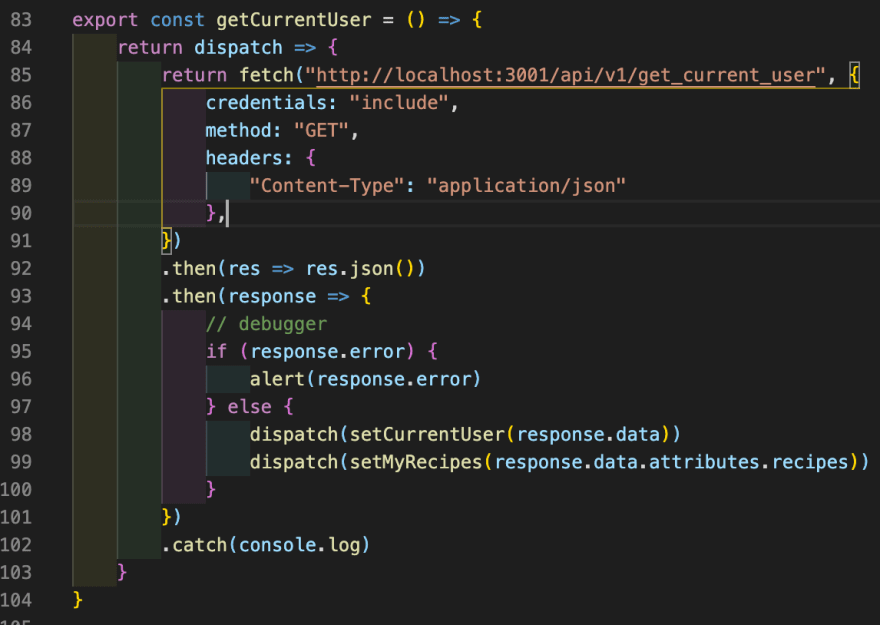 In addition to using currentUser state from Redux store in NavBar.jsx, I also used it in my RecipeCard component to render a link to edit a recipe only if a userId is equal to currentUserId`. This authorizes a user to edit only a recipe that belongs to them. 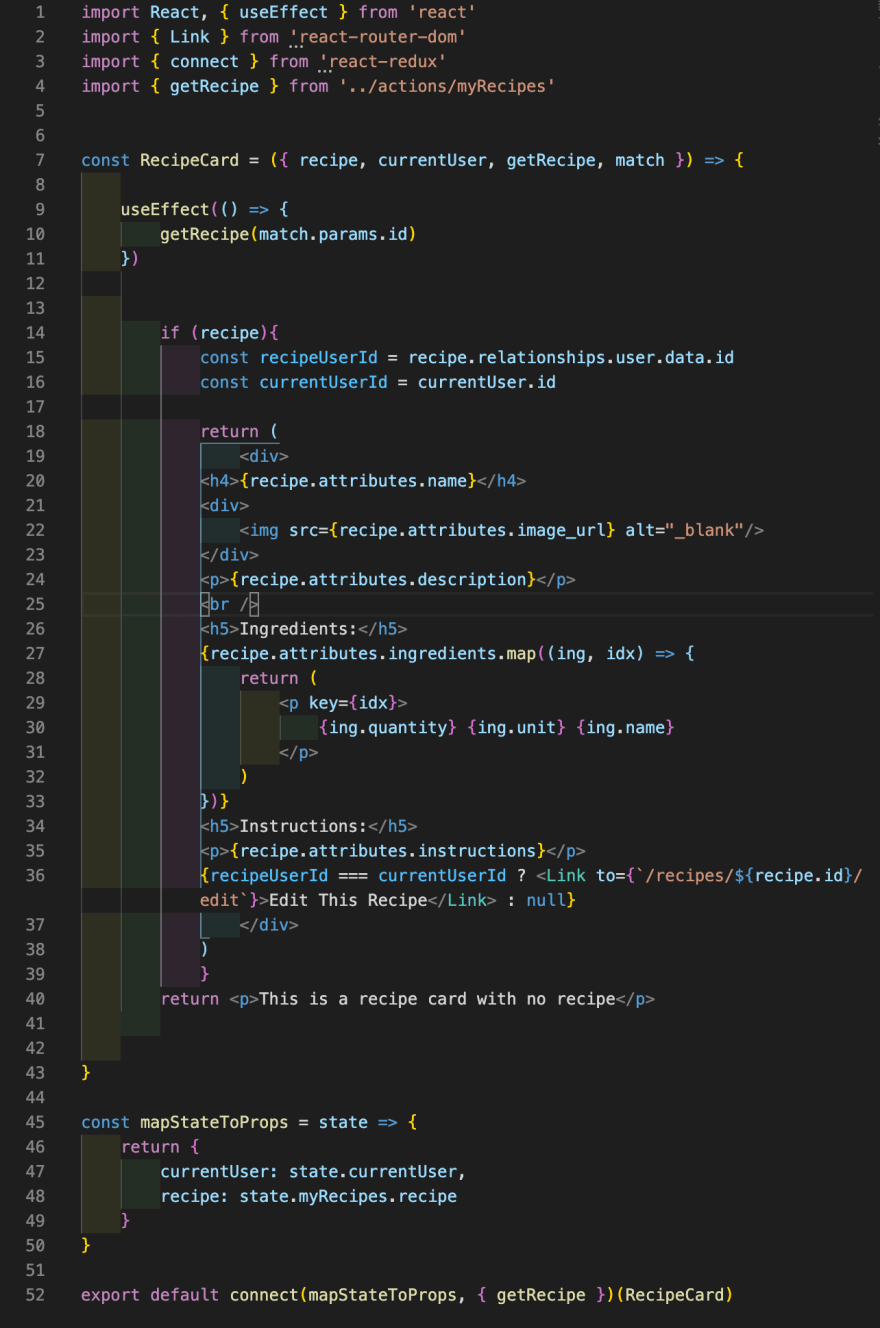 This application has three forms total: 1) signup form, 2) login form, 3) recipe form. Both signup and login form state are managed by Redux. I originally was going to use Redux to manage recipe form as well. The problem I ran into with recipe form was that it was a nested form. The three main models in the backend have these relationships:

I was running into a problem handling changes in the ingredient field form. It wouldn't show the changes in the correct attributes in Redux store. Because a recipe has many ingredients, I also wanted there to be a button that will continually render ingredient fields as I needed to add more ingredients to the recipe. One of the things that fixed it was adding this line of code in recipe.rb in API.

I had completely forgot about accepts_nested_attributes_! I also needed to add this to strong params in RecipeController. 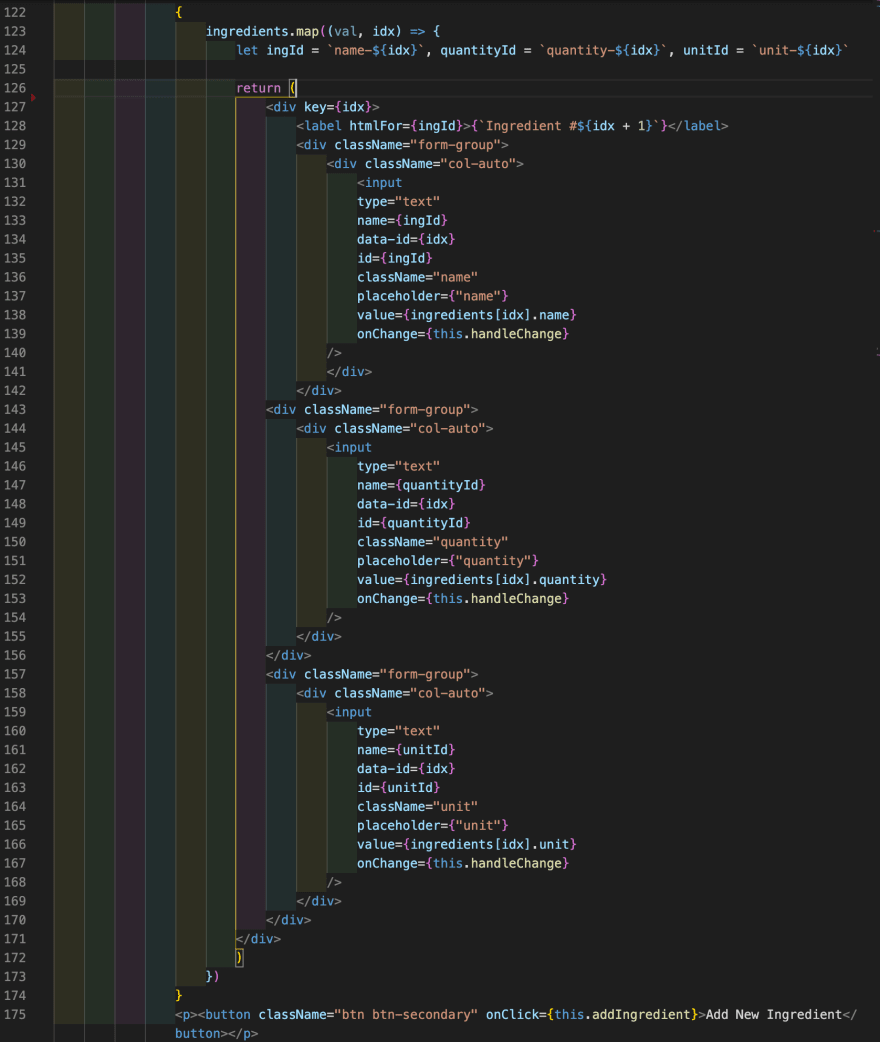 The recipe form renders with one ingredient field with a button to allow a user to add as many ingredients as they would like.

I am glad that I was able to get through these roadblocks. I have so many more plans for this application and I will continue to work on this project. I do plan on deploying this application on Heroku once I have decide how I want the RecipeCard component to look. It has been an insane ten months and I have come a long way. I came into Flatiron School not knowing how to code and now I am able to build a full-scale web application. I am excited to learn more and continue on this journey!