Quite recently, the main argument for native vs. cross-platform framework was that native apps perform better. This argument is not valid anymore as cross-platform apps enable developers to build apps that can compete with native apps. Not only that. The cross-platform approach is much more efficient when it comes to time and money. Given this, let us go into the depth of the cost of one of the cross-platform frameworks – Flutter.
In this piece, you will get an answer to the question ''how much does it cost to build an app with Flutter?''. We will talk about the Flutter app development cost and leave you with the decision of whether to use this framework or not.

When to Choose Flutter?

Flutter is the best choice when you have to develop features for iOS and Android simultaneously. It's better to combine them with Flutter. However, if you are aiming at specific platforms like projects requiring the Wear Os version or a Smart TV app, it's better to go for native as Wear OS does not support all Flutter's development features. The same is true for Android TV that reads remote control input whereas Flutter applies touchscreens and mouse movements. Android TV is compatible with Flutter with rewritten control logic.
When deciding to go native vs cross-platform, it really depends on your goal and whether you need cross-platform or not.
You may also think about Flutter vs React Native.

Read this Quora article for the difference between Flutter vs. React Native for an informed choice.

Let's answer the question ''How much does it cost to build an app?''
There are several factors that affect Flutter app cost and the location of the developers is decisive. For example, Flutter app cost will range somewhere between $5,000 to $15,000 for a small app with core features if the developers are from Asian countries like India whereas software with simple features will cost from $26,000 to $34,800 in the Western part of the world.
You will get a better sense of how decisive the location of the developers is when you look at this chart with developers' rates in different regions.
Flutter developers' rates in different regions 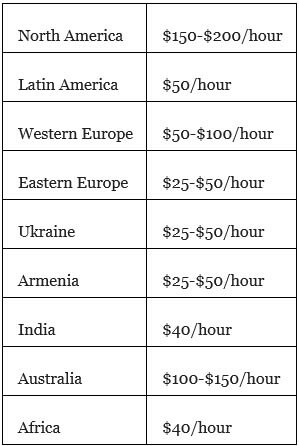 Cost of Developing a Flutter App

The complexity of the app

Naturally, the more features your app has, the more complex and high-cost it becomes. You pay developers per hour and it's logical that complex apps are more costly. Here is a chart to make sense of how complex features affect the Flutter app cost. 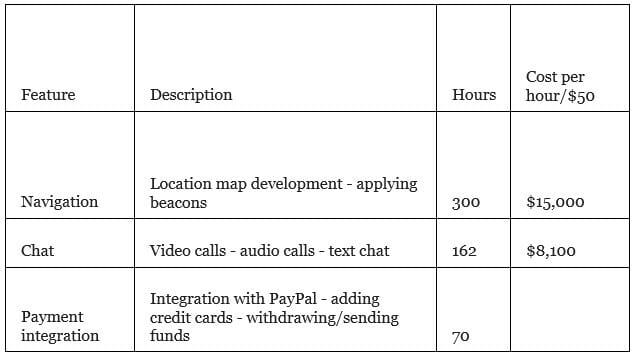 This is when the actual work is done. Depending on the complexity of the app, the number of hours and number of developers may vary. This is the most costly part of the app development as the actual work takes place at this stage. To have a better idea, check this article on an app development cost to make a more informed choice.
People who typically participate in this stage are:

Once the app is out in the market, it needs constant maintenance and support services. The additional expenses normally include server rent, design, app store release, and maintenance and support charges. And it does not matter how successful your app's results are. You need to update it periodically. You may also want to include new features, do design modifications, fix bugs, etc. 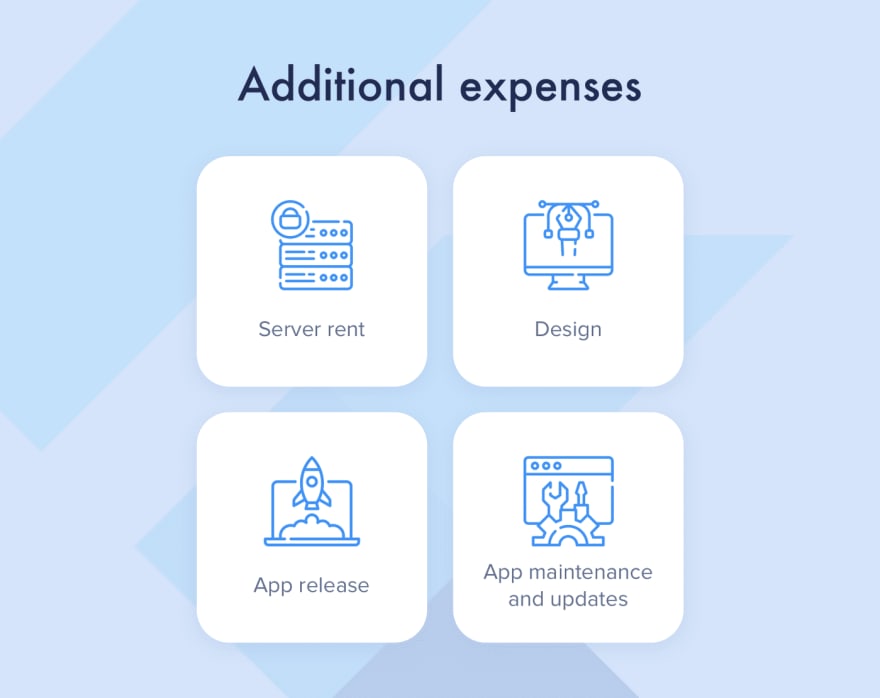 To process and store user data, you need to rent a server. The reliability of the server is a key issue as insecurity may lead to high response time and low performance. Amazon EC2 is one of the most secure and popular servers. On average it will take about $1500 for server rent. Some other popular server providers are Cloudways, Cloud Hosting.

There are some charges for releasing an app in an app store like Google Play Store, Apple App Store. Google Play Store fee is 30% of the price the customer pays. This means that the developers get only 70% of the payment. The fee for the Apple App Store is USD 99 per membership year.
This year Google reduced the 30 percent cut to 15 percent for all Android developers around the world, on the first $1 million they make.

Your app needs to be aesthetically pleasing but it comes at a higher development cost. Combined with UX design, UI designing can deliver a great experience for app users.
The price may be conditioned by:

Don't get surprised if the money spent on updating within a certain time will be higher than the actual development. Normally, businesses allocate 15-20% of the Flutter app development cost into the budget for maintenance. However, major maintenance takes place at a time when your app may already generate revenue so really you are allocating only part of the profit instead of seed funding.

It's interesting to know that some of the most popular apps are built with Flatter, like Google Ads, Reflectly, My BMW, AITeacher, Now Live, K12, Mr. Translator, QiDian, and DingDang of TenCent, Google Assistant apps.
Here are some amazing apps built with Flutter.

Reflectly is a healthcare app. It is built with Flutter technology. The app applies AI technology to track the mental health of patients as well as monitor their everyday life. It involves behavioral therapy and positive psychology approaches.

The BMW Group is a leading automotive app developer with Flutter technology. All of these apps were developed 100% in-house. My BMW apps are available in 5 continents expanding from 30 European markets, China, Korea to Japan, and Australia.

Square Reader SDK enables developers to build an app for in-per payments. With this SDK, developers can build apps for points of sale, self-service kiosks, etc.

Hamilton uses Flutter to create a better user experience for Broadway musicals. The app was developed by a New York-based development team Posse that decided to use Flutter. Flutter UI kit allows us to create beautiful native experiences. The app is not only entertaining but also excels in high performance.

It's hard to come up with an exact estimate for Flutter app development. This article was an overview of the available data.
To recap, the following are the main stages:
Discovery stage
UI/UX design
Development and testing
Maintenance and support
Other expenses (server hosting, app release).
For an exact estimate, contact the vendors.
If you have an idea, you can apply to a qualified mobile app development company that can develop it into a workable project.

Getting Started with Flutter Event Calendar in 10 Minutes