WHAT ARE RENDER-BLOCKING RESOURCES?

These render-blocking resources block the first paint of a website or web application.

To prevent this, we can do the following:

A Lighthouse audit flags the following resources as render-blocking:

To reduce the impact of render-blocking resources, identifying critical resources is an important part of the process. To do this, we make use of the Coverage Tab of the Chrome DevTools.

The Coverage Tab allows us to see how much of our code is being used versus how much is being loaded.

To open the Coverage Tab, first open Chrome DevTools via CMD + ALT + I on MacOS and CTRL + SHIFT + I on Windows. Then: 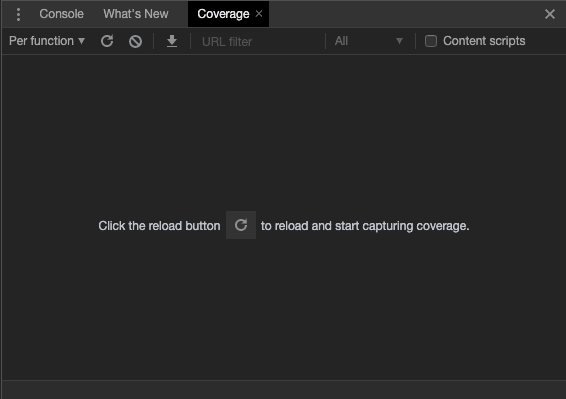 Clicking on the reload button reloads the website and therefore captures the coverage/usage of several files that were requested by the web page. 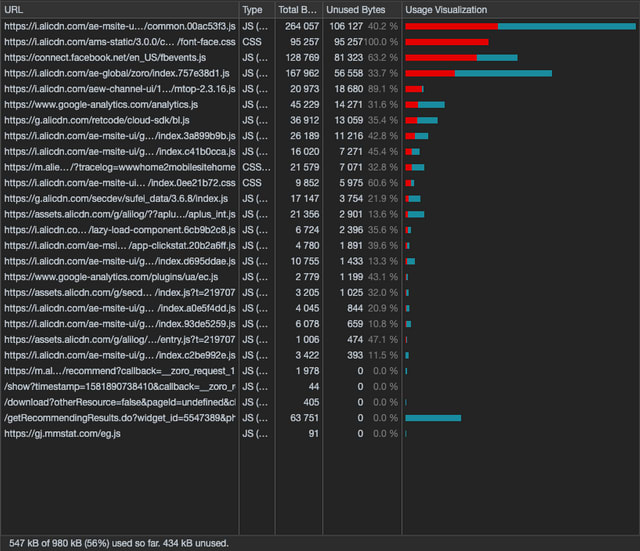 The Coverage Tab shows us information such as the resource URL, resource file type, total file size, its unused bytes and a visualisation of used versus unused bytes.

Clicking on the resource URL, Chrome DevTools opens the file indicating the used (critical) and unused (non-critical) lines of code. 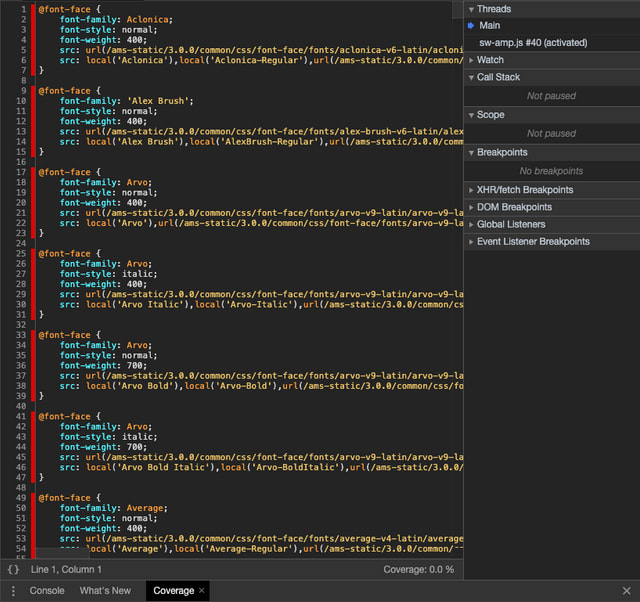 Styles in CSS and code in JavaScript are marked in two colours in the Coverage Tab:

Eliminating render-blocking stylesheets can be done through inlining critical styles required for the first paint inside a <style> block at the head of the HTML document. Then load the rest of the styles asynchronously using the preload link (<link rel='preload'>) which defers unused CSS.

You should also consider automating the process of extracting and inlining "Above the Fold" CSS using the Critical tool.

Another approach to eliminating render-blocking stylesheets is to split up those styles into different files, organised by media query. Then add a media attribute to each stylesheet link. When loading a page, the browser only blocks the first paint to retrieve the stylesheets that match the user's device. Below, is an example of how this can be done.

In the example above,

Finally, you'll want to minify your CSS to remove any extra whitespace or characters. This ensures that you're sending the smallest possible bundle to your users.

As with render-blocking stylesheets, once you've identified critical code, move that code from the render-blocking resource URL to an inline script tag in your HTML document. When the page loads, it will have what it needs to handle the page's core functionality.

If there's code in a render-blocking resource URL that's not critical, you can keep it in the URL, and then mark the URL with async or defer attributes.

Code that isn't being used at all should be removed.

For non-critical HTML imports, mark them with the async attribute. As a general rule, async should be used with HTML imports as much as possible.

This post elaborates on one of the ways to optimise the First Paint(FP) and First Contentful Paint(FCP) metrics by avoiding render-blocking resources.

In the next post, we look at how we can cache critical resources to improve performance on repeat visits.

Once suspended, codesensei will not be able to comment or publish posts until their suspension is removed.

Once unsuspended, codesensei will be able to comment and publish posts again.

Once unpublished, all posts by codesensei will become hidden and only accessible to themselves.

If codesensei is not suspended, they can still re-publish their posts from their dashboard.

Once unpublished, this post will become invisible to the public and only accessible to Tsowa Babangida.

Thanks for keeping DEV Community safe. Here is what you can do to flag codesensei:

Unflagging codesensei will restore default visibility to their posts.