Starter kits are the obvious next evolutionary step, as they come pre-configured with many popular libraries (react-slingshot, e.g.). However, unless the included libraries match exactly what a new project requires, developers will need to spend time replacing and adding configuration they need. Additionally, actively maintaining starter kits that cover all possible combinations is simply not feasible.

Available starter kits for rendering React Native on different platforms nicely illustrates this problem. Most out-of-tree starter kits only target the web (create-a-react-native-web-app, react-native-web-monorepo) leaving other platforms out. Other starters target all platforms (react-everywhere), requiring developers to manually remove what they don't need.

The problem lies with treating configuration as a static, integrated whole rather than as dynamic, isolated, and individual plugins. Making this switch allows developers to dynamically choose pre-configured libraries, in essence, creating their own starter kits.

Core - Configuration and files that apply across the whole project, for example package.json, index.js, and app.json.

App Code - Business logic, UI, and everything else that lives in src.

For example, react-native-web requires configuration (webpack.config.js), platform files (index.html), and dependencies (react-dom) that are specific to rendering React Native on the web but are not required for Android, iOS, MacOS, or Windows. Configuration and platform files can easily go into a separate folder, but core configuration (dependencies, e.g.), should go in shared files (package.json) at the project root.

Adding support for more platforms to React Native, then, is a simple process:

This process can be expanded beyond platforms to other React Native libraries, such as navigation, state management, and UI libraries. A simple example is implemented in React Native Infinity with two UI Libraries: Material Bread and UI Kitten.

The last step, after all configuration has been isolated and merge functions created, is to build a simple CLI that asks users what platforms and libraries they want to add.

React Native Infinity CLI generates React Native projects that target any combination of platforms (Mobile, Web, Electron, Windows, and MacOS). Platforms can also be added later on with the add-platform command. Finally, two UI libraries can be added at initialization. Built with Commander.js and Enquirer.js.

Note: This is an experiment in the early stages, if you find a bug, please consider contributing with an issue or PR.

Command to initializes a new project with a series of questions.

Command to add platform configuration to an existing project. Platforms are provided as lowercase, simple strings.

Simple tool that generates a CLI command to initialize a project with the platforms and libraries selected. Can be found at reactnativeinfinity.com 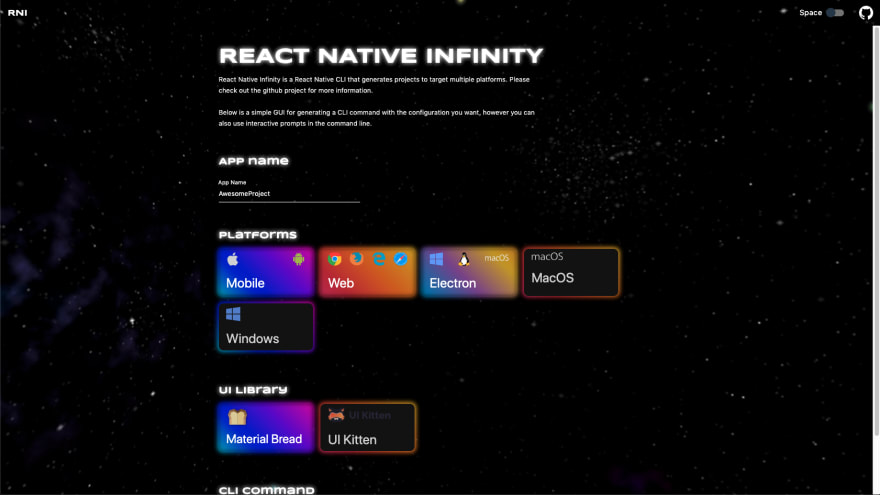 Django vs React: Key Difference That No One Will Tell You