What the hell is bash anyway? Before doing any kind of research, I actually had a very difficult coming up with a simple explanation.

Bash is a program on your computer. This program is designed to take commands from you, the user. But bash is programmed to do a myriad of tasks. To make sure this program is efficient, a bash language has been created. This language allows you to speak to the bash program to tell it what to do.

bash stands for Bourne Again SHell and it is the default shell in most of the Linux distributions and OS X. There are different kind of shells, C shell (csh), Z shell (zsh), Korn shell (ksh)... Because I'm on OS X and bash is the default shell on my machine, I'll be using this.

How does it take commands?

So, you won't have any GUI ( Graphical User Interface ) to interact with bash. It takes text commands, its simplicity is its power.

What does it do?

SO MUCH... I've only scratched the surface and I'm already amazed... Editing files and images, then converting them. Moving and copying files, create back-ups. Download code, compile the code, run the code...

Bash is an amazing tool. By learning how to use even some simple commands ( and you already do 😉 ), you will make your life a lot easier.

If you are on a Linux or OS X, you most likely already have bash installed. On Windows 10, I do believe you can active something called Windows Subsystem for Linux.

Open a terminal. I'm using iTerm2, but any terminal will do the trick. Let's type our first command:

First bash command completed! You successfully just returned the version of bash you are using.

Note: The terminal is not bash. The terminal is what's making the text appear on your screen, inside the interface. Bash is one of the many programs that can run on your terminal. 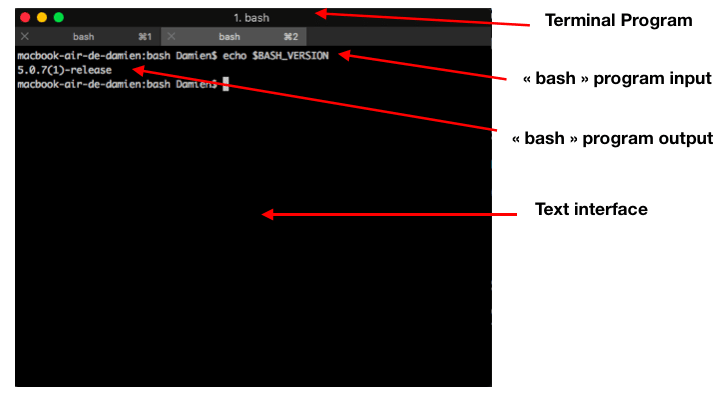 Every bash script will start with a shebang that specifies the full path of the command interpreter that will be used to run the script. Mine will be:

They all start with #! followed by the path. To get your path, you can run which bash in your terminal.

Next, let's do some simple commands:

To make sure our computer doesn't explode, we must respect the ancient traditions of our people and start with a Hello World!. Once this is done, we use the echo commands to print some strings. We use the read command to ask the user for an input. We store the input in a variable called name and print it out on the terminal.

Now, we need to execute this script. But, for security reasons, scripts are not executable by default. To change this, you must run:

The variable name, which I populated with Damien is properly printed back on my terminal.

Let's edit our script to do something different and exploring other commands.

OK, we have a few things here.

YOU HAVE TO PUT SPACES AROUND THE CONDITION.

Failure to do that will result in an error. You've been warned!

Ok, I feel like this is enough for a first article on bash. We have seen what bash is, how to interact with it and used some simple commands. Next time, we'll dive deeper 😉

Bash cheat sheet: Top 28 commands for you to learn 🤺