Containerization has become one of the most popular technology in the last few years. Today companies focus on designing cloud-native applications that can be run within containers as microservices. It improves the scalability of the applications to run on any platform irrespective of the underlying system. One of the commonly used container engines is Docker which is preferred to run Kubernetes to orchestrate their applications.

A whole new revolution of containerization started with Docker containers ,where the daemon process manages the whole bunch of things and soon it became one of the most popular and widely used container management systems.

But recently Podman has emerged as a strong competitor for Docker. With Docker, you depend on daemons while with Podman you can run directly using runC runtime containers. There is more to Podman which we will discuss below.

Podman is a daemon-less container engine for developing, managing, and running OCI Containers on your Linux machines. Containers can either be run as root or in rootless mode.

Podman was developed by Red Hat in 2018. Podman is an open-source container management tool that allows you to build, manage, and to run OCI containers. Podman is also a containerization engine that works on a completely different approach than Docker. Podman does not depend on daemon to work, unlike Docker that uses both Docker CLI and Docker Daemon to work with images and registries. The main drawback of Docker using daemon is that it has to depend on a single process, which also leads to a single point of failure creating all the dependent child processes that will also get failed or orphaned. This failure limits Docker’s flexibility as a containerization engine.

Podman is designed according to OCI standards that allow Podman to interact directly with the kernel, containers, and images. Podman is more secure than Docker as it does not require root access.

The Podman approach is simply to directly interact with the image registry, with the container and image storage, and with the Linux kernel through the runC container runtime process (not a daemon) 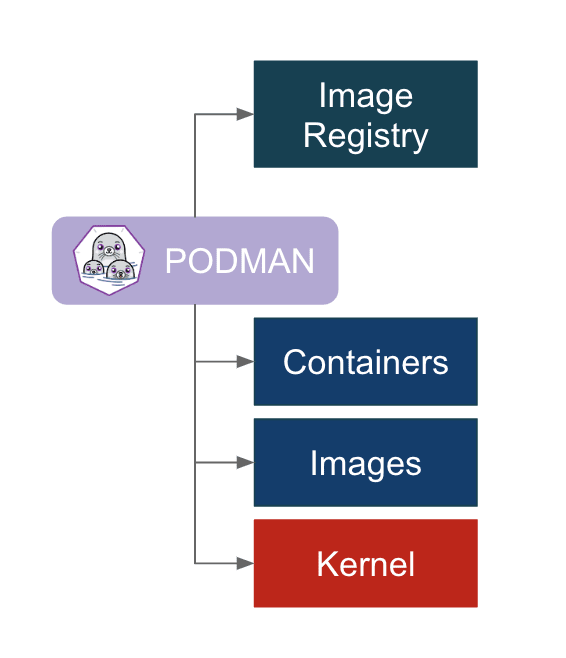 Below are some differences mentioned between Podman and Docker.

Now without a daemon to worry about, you can easily create and manage complex containers while maintaining security and keeping the ecosystem efficient with the help of Podman as your containerization engine.

That being said Podman is still a new technology which is evolving and it might be better to be in a wait and watch situation, before we start seeing community adoption for Podman and it becomes a more matured and stable tool. You can definitely try it on your local machines and explore it more, but taking it to your production environment might still need some time.

Up and running with K0s and Portainer

DevopsCurry
DevopsCurry is an online Digital Tech platform focussed on Cloud and DevOps technologies. It provides content related to the latest news, developments, technologies and tools in the Devops domain
Key DevOps Principles to focus in 2021
#devops #cloud #docker #kubernetes

Once suspended, devopscurry will not be able to comment or publish posts until their suspension is removed.

Once unsuspended, devopscurry will be able to comment and publish posts again.

Once unpublished, all posts by devopscurry will become hidden and only accessible to themselves.

If devopscurry is not suspended, they can still re-publish their posts from their dashboard.

Once unpublished, this post will become invisible to the public and only accessible to DevopsCurry.

Thanks for keeping DEV Community 👩‍💻👨‍💻 safe. Here is what you can do to flag devopscurry:

Unflagging devopscurry will restore default visibility to their posts.