After seeing the amazing feedback and requests that followed my latest article on What and How to Test with Jest and Enzyme, I’d love to share a couple of other test cases. Today, we’ll talk about testing React forms that are connected with Redux, considering both unit and integration testing. Hopefully, you’ll find something useful below.

Before we dive deep into the subject, let’s make sure we all understand the basics. There are many different types of app testing, but a 2018 survey shows that automated unit and integration tests are at the top of the list. 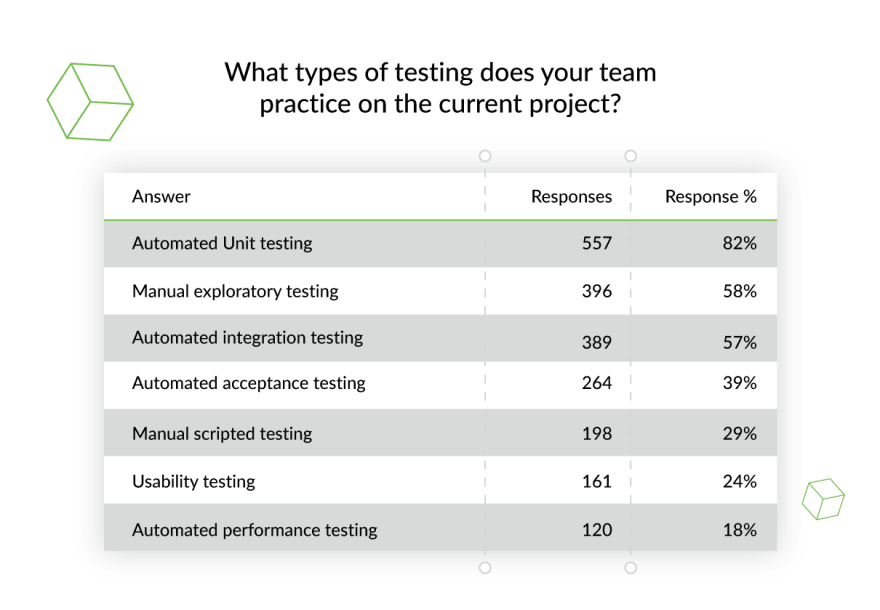 For a better comparison, I’m only picking the two main automated testing methods. Let’s look at the definitions and characteristics of unit and integration testing: 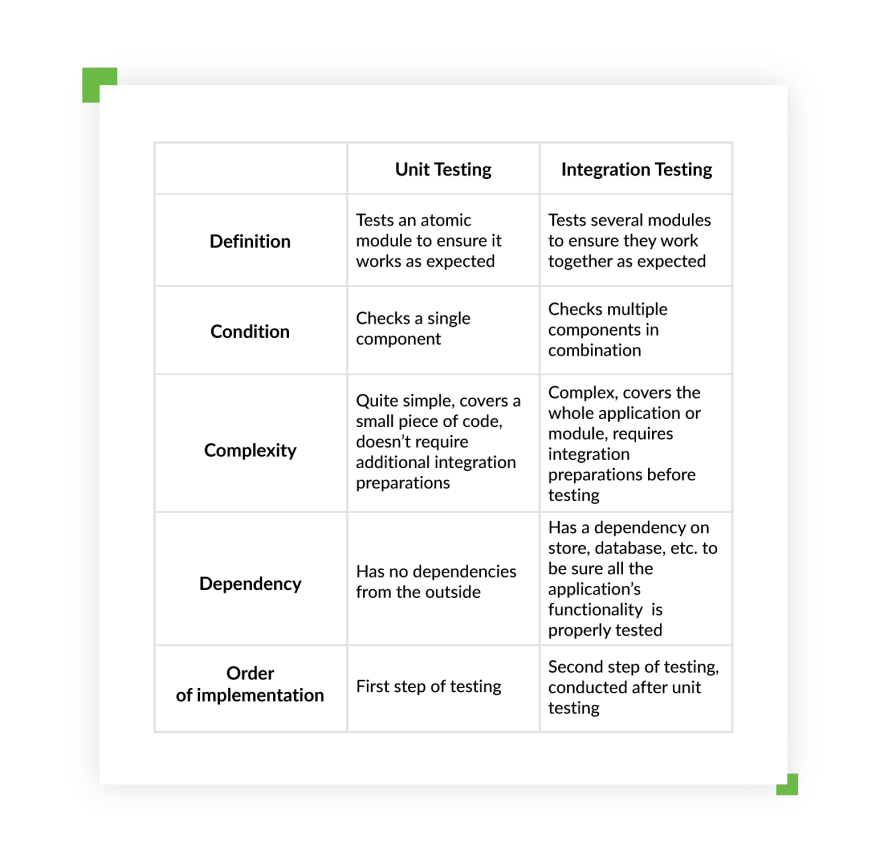 Before you start any job, you want to know all about it. You don’t want any surprises, and you do want the best results. This is also true for testing. Which is why it’s better to get all the available information on the form that should be tested, and its related conditions beforehand. And, of course, to make sure you know what exactly should be tested.

To show you how it goes, I chose a form that contains information on Property Evaluation. It’s a form that customers fill in to describe the property they would like to purchase. It’s quite simple – it doesn’t have any complex logic or mandatory fields, and a few fields to fill in.

Check out the image below: 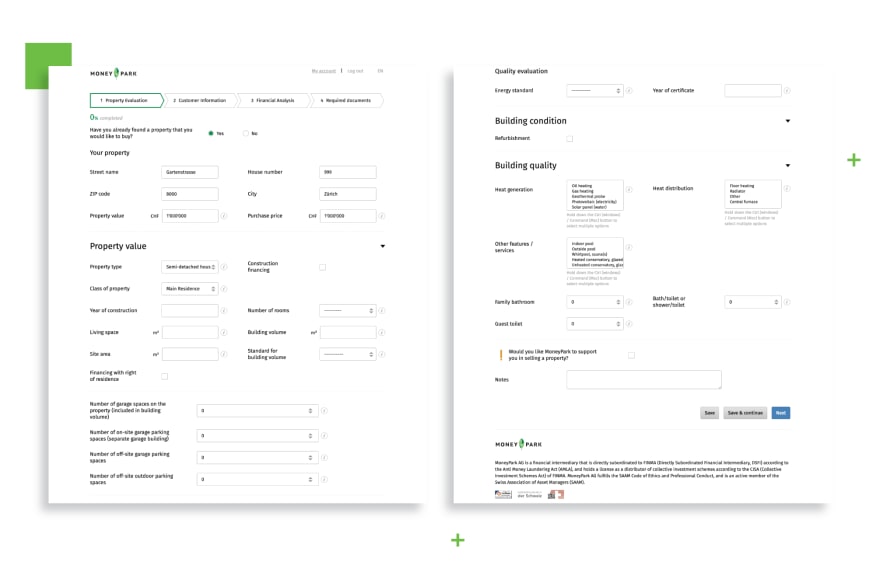 The only logic you can’t see in the image are different fields that are set depending on the choice in the Property type field. For instance:

Next, let’s dive into the form’s code. The implementation of the form is divided into two parts: 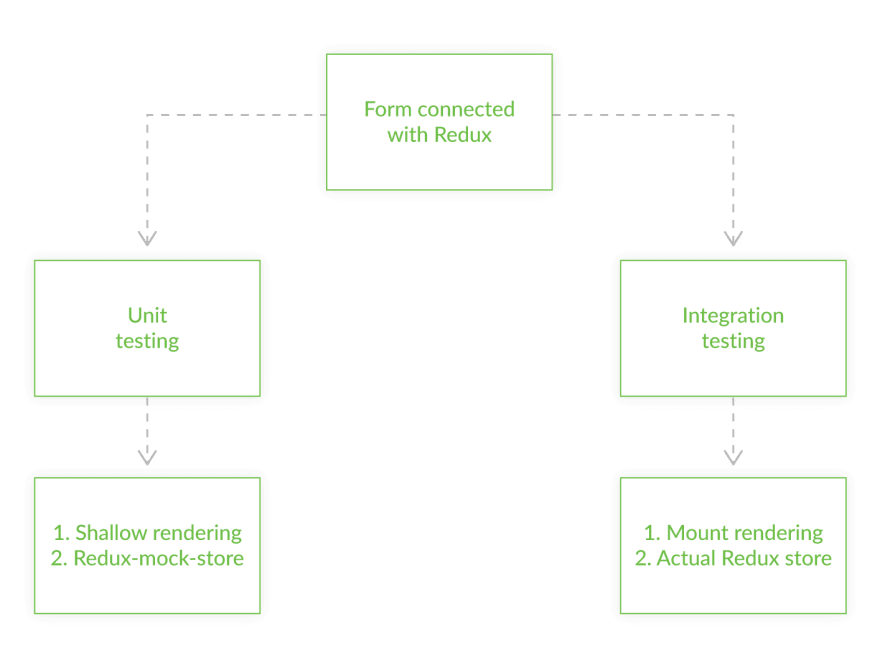 Depending on the type of testing, I use different processes to test forms connected with Redux.

Redux-mock-store is a library designed to test action logic, and provides a mocked Redux store. It’s easy to launch and to use, and doesn’t affect the Redux store itself.

Before you start testing, be sure to configure the form.

These are my imports:

The form view depends on the property type; that’s why I put in default props.

First, configure the mock store with the help of the redux-mock-store library.

Inside the function, don’t forget to:

Here’s what it looks like with the dive() method: ShallowWrapperWithDiveMethod.js

Now, you’re ready to write the test itself. Follow my process to see how you should proceed.

Create a snapshot to check the user interface for property type ‘House’:

At this point, you must be asking yourself, “Why do we need two tests for one property type, both snapshot and field existence?” Here’s why: the two tests help us check logic and UI.

This is what we get from the two tests:

Having gone through two tests, I see exactly what the problem was and where I should look for reasons for failure. I repeat the process with another property type – ‘Apartment’ and its expected array of fields. I follow the same steps:
Check the list of fields rendered correctly for property type ‘Apartment’:

Create a snapshot to check fields for property type ‘Apartment’:

The next test is experimental. I decided to investigate a diffing snapshot utility for Jest that one reader of my recent article suggested.

First of all, let’s see how it works. It receives two rendered components with different states or props, and outputs their difference as a string. In the example below, I created a snapshot showing the difference between the forms with different property types – ‘House and ‘Apartment’.

This kind of test has its advantages. As you can see above, it covers two snapshots and minimizes code base – thus, instead of two snapshots, you can create just one showing the difference, and similarly, only write one test instead of two. It’s quite easy to use, and lets you cover different states with one test. But, looking at my case, I got a snapshot with 2841 rows, as shown on github. With a large amount of code like this, it’s too hard to see why the test had failed and where.

This only proves one thing: whatever you work with, use your tools and libraries wisely, and only in the places that really require it. This utility may be useful for testing differences in stateless components to find UI inconsistencies, and to define differences in simple functionality components that contain minimum logical conditions. But for testing large pieces of UI, it doesn’t seem to be appropriate.

Before we wrap up the part about unit testing of forms connected with Redux, there’s one more thing. There’s a reason why I didn’t include tests for events. Let’s look at the form structure PropertySelfOwnedForm.js that includes the ButtonsToolbar.js component.

This component contains three buttons: ‘Save’, ‘Save and Next’ and ‘Next’, and is used in many forms. Shallow rendering doesn’t include child components, and at this point, I don’t care about their functionality. And rendered ButtonsToolbarcomponent looks like this:

The truth is, I don’t need to test it as a part of unit form tests. I will test the button events separately in ButtonsToolbar.test.js. You can find the full tests listing here: PropertySelfOwnedFormUnit.test.js

For integration testing – testing components in a working environment – I use mount rendering. Mount rendering is a type of deep level rendering that includes all the child components by mounting them all into the DOM.

This kind of rendering is actually quite similar to the real DOM tree, as its components’ behavior is interconnected. And the goal of the integration testing is to check this connection. Thus, an actual Redux store is in this case a great choice.

An actual Redux store is one created with the help of a redux library. In this case, there’s no need to mock anything, as you can use the real store the same way as in the app.

Next, I’m configuring my form for testing.

Then, I prepare data for testing. To do so, it’s important to keep in mind that:

If it makes it easier for you, the sequence of data preparation for integration testing is the same as it is for actions during the form integration with Redux.

Render form before each test:

Now, let’s do the actual writing. The first step is to create snapshots of both property types. This means that, first, you create a snapshot to check the fields for property type House’:

Next, create a snapshot to check fields for property type ‘Apartment’:

The form buttons are disabled if the form is a pristine or in submitting state. The following test checks if the ‘Save’ button reacts to form changes and becomes active after losing the pristine state:

The last three tests check events that are called by clicking on the onSubmit, onSubmitAndNavigate, or the onNavigate button.

Check if an onSubmit event was called:

Check if an onSubmitAndNavigate event was called:

Check if an onNavigate event was called:

Now the form is fully tested, including the inside components being rendered.

To conclude, I’d like to say that both unit and integration testing are equally important. Each type of testing does its own work and has its own purpose. Dismissing one can lead to a lot of troubleshooting work in the future.

Unit testing mainly covers the user interface, while integration tests dig deeper into functionality. Some people find it redundant to do both, but I’d say both are necessary if you want your product to look good to the user, be user-friendly, and also work smoothly. Unit testing alone will never cover the most important part of the product – the interactions among components. Besides, it’s better to be safe than sorry.

When it comes to testing, forms require special attention, as forms are an essential part of many projects and a way to communicate with customers. Which is why it’s vital to be properly prepared and carefully go through all the stages – imports, mocks preparation, store creation, form decoration with Redux, and correct wrapper creation. But the tests themselves are not complicated. In most cases, they follow form logic and reflect field changes and button simulations (in the case of integration testing).

Thank you for your time. We look forward to reading your feedback!

This tutorial on unit and integration testing of React/Redux forms was written by Alyona Pysarenko — Frontend Developer at Django Stars.
Originally published on Django Stars blog.

Django Stars
Components testing in React: what and how to test with Jest and Enzyme
#frontend #react #javascript #jest