The web browser are the main part of internet world. When ever we type a URL in the address bar, it fetch resources from remote server, and display them on the screen, through this time it mainly undergoes 3 process

At first it fetching data from subsequent web servers via the internet.

Then the Render engine, will process the received resourses. After that the Browser Engine will performs data presentation.

To know better about these processes, we should know how a browser process JavaScript . And that is done by JavaScript engines.

A JavaScript engine is a program or an interpreter which executes JavaScript code. JS is a higher level dynamic language and it has no way to directly interact with our machines lower level logic. So JavaScript engine can be implemented as a standard interpreter, or just-in-time compiler that compiles JavaScript to bytecode in some form . see the high level overview of the js engine in below image 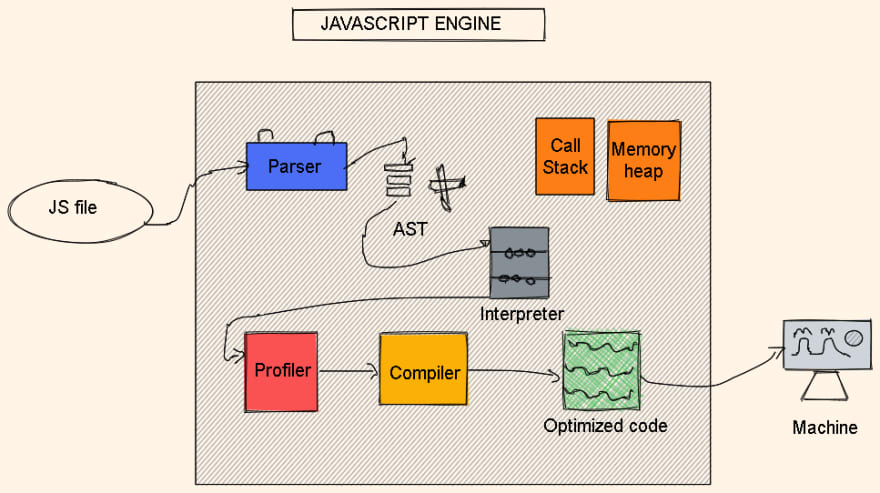 We have seen different components of js engine . Now lets check what are the Different JavaScript engines available..

The V8 Engine which is built by Google is open source and written in C++. This engine is used inside Google Chrome. V8 is also used for the popular Node.js And Deno. To obtain High performance, V8 translates JavaScript code into more efficient machine code instead of using an interpreter. Even though Most modern JavaScript engines has the same approach, but V8 stand out is that it does not produce any intermediate code.

V8 compiles JavaScript code into machine code at execution by implementing a JIT (Just-In-Time) compiler. A JIT compiler takes the benefits from both the traditional compiler and an interpreter and mixes them together.

When V8 compiles JavaScript code, the parser generates an AST (abstract syntax tree). A syntax tree is a tree representation of the syntactic structure of the JavaScript code. Ignition, the interpreter, generates bytecode from this syntax tree. TurboFan, the optimizing compiler, eventually takes the bytecode and generates optimized machine code from it.

The interpreter in v8 is called Ignition. The interpreter generates the byte-code. This is good for code that only needed to run only once. The byte-code runs inside the JavaScript engine itself. Interpreted code is falser to get something running but is a bit slower. Ignition resolve overhead memory consumption by achieving three objectives

The TurboFan pipeline follows some steps to translate bytecode into machine code. Optimizations in the pipeline are performed based on feedback collected by Ignition.

Sometimes, we may have repeated code blocks. The JavaScript compilers run feedback and collect profiling data for the code being executed. If it comes across the function that is being called with the same type of parameters every time and has been called multiple times, this code goes through TurboFan. The TurboFan produces highly optimized machine-level code which runs directly on the CPU for the hot code. TurboFan only kicks in when JS engine detects a code to be hot. A code is hot when it runs quite often, runs inside a loop, etc. The compiled code has direct CPU instructions and is quite faster.

How to Use Environment Variables in React App?

Once suspended, edisonpappi will not be able to comment or publish posts until their suspension is removed.

Once unsuspended, edisonpappi will be able to comment and publish posts again.

Once unpublished, all posts by edisonpappi will become hidden and only accessible to themselves.

If edisonpappi is not suspended, they can still re-publish their posts from their dashboard.

Once unpublished, this post will become invisible to the public and only accessible to Edison Augusthy.

Thanks for keeping DEV Community 👩‍💻👨‍💻 safe. Here is what you can do to flag edisonpappi:

Unflagging edisonpappi will restore default visibility to their posts.