This article covers how to implement a basic U ser I nterface on Unity using Unity UI to display info to players.

Last time we end up updating all the movement logic to be handled by Unity’s Physics engine and make use of its collision system to detect our player’s bullets colliding with the enemies to be destroyed.

This time we’ll be showing the Score Points on the game screen.

We will be using Unity UI for our game UI, starting with the score display.

To display our player’s score points, we will need to use the Text Visual Component. Let’s start by adding one to our Game Scene.

As you can see, this will create 3 Game Objects in our Hierarchy Window, a Canvas containing Text, and something called EventSystem.

Select the Text Object and rename it to Score Text, then go to its Text Component and put some placeholder score in its Text input (like 1978) to have a reference of how it would look.

Now you may probably have noticed that there is no text shown in the Scene Window. This happens because the Canvas, as we said, is like a sticker in our camera, it is not part of the game world. To center our Game Window in the Canvas Game Object, select it in the Hierarchy Window and then, with the cursor over the Game Window, press F, this will move the Game Window view to fit the Game Object you have selected, in this case, the Canvas.

With the canvas on sigh now, it’s time to position the Score Text, select it, and in its Inspector Window under the Rect Transform section, click on the icon similar to a red reticle, this is the Anchor Presets selector. Now with the Anchor Presets selector opened when pressing Shift+Alt</kbd> you'll see that the selection icon change, select the one under the row with "top" label and the column with "right" label while pressing Shift+Alt</kbd>. This will place the Score Text Object on the top right corner of the Canvas and anchor it.

If you now switch to Game Window should see something like this. 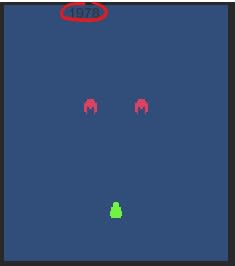 Now that our Text is positioned in the Canvas, let’s give it some styles and appearance similar to our game visuals.

First, we are going to change the font used for the text. We’ll be using Press Start 2P you can download it from codeman38’s webpage (the author). We placed the fonts under /Assets/Genoma Invaders/Fonts/Press Start P2/ to organize the project’s files.

To change the font for the Score Text Object: 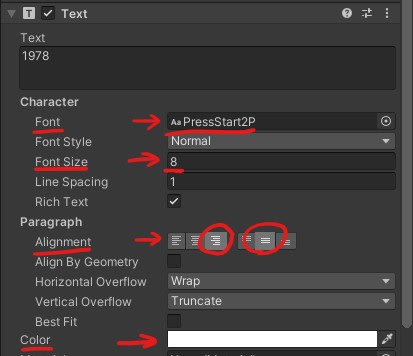 As a final tweak to adjust the size and position of the element, go to the Score Text Object’s Rect Transform Component and set the next properties:

Note: You should see the changes applied in the Game Window (remember to set the Taito 8080 resolution configured in the first lesson). 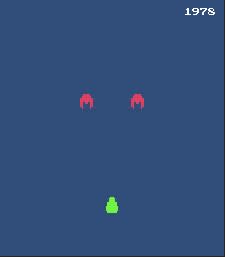 The Score Text Object is ready to display our Game Score, and now we need some logic to update its Text value.

Create a new C# Script in the Project Window called Score.cs and place it under /Assets/Genoma Invaders/UI/ (new folder). We will use this Component to maintain the Score points for our Game.

The previous code does set the Text value to the initial score (0) whenever the Game Starts and update it when someone calls the method AddScore. Attach it to the Score Text Object and Play the Game, you should see the Score Points to 0.

This way, whenever Destroy method is called (remember that the Bullet Component is calling this method over the Enemy Object) with a Game Object containing an Enemy Component, it will update the Score points before being destroyed from the Scene.

We ended up with a game displaying a score text that updates whenever an enemy is killed and learning a bit about Unity UI systems.

You can get the code generated by following this tutorial in Genoma Invaders’ Github repository, branch tutorial/04.