I read somewhere that as you go up levels in your organization, the balance of what you control and what you cannot gathers more in the "what you cannot" part of the equation. Becoming an engineering manager, for me, became an example of favor of this idiom. For this particular position, I had to be more in touch with outside influences than I ever had before.

As an IC, a lot of my tech knowledge was a result of decisions made by people with greater influence in the company. Generally speaking, an IC may be great with a particular technology, but that choice of technology is made someone at a higher level who then found the relevant persons. ICs can argue all day about particulars, it has been a rare case when a technology choice's success and failures rested with someone who wasn't on the management or executive level.

For a long time I was dependent on my personal network and co-workers to keep abreast of important developments in the field of web engineering. By choosing organizations that valued applying new technologies, it was likely there would be ongoing internal sharing and debate about tech, driving my knowledge forward. I searched for resources on an infrequent basis, as information came to me by the natural process of going to work and spending time with my peers.

Then I became an engineering manager. Top down information would become more of the managerial and organizational bent than the technological. I was also going to become more isolated from my direct peers: I had them, but we all spent more time focusing on things internal to our teams.

Assuming the mantle of engineering manager also meant that I took on a greater piece of technology choice and ownership. This meant I had less time to explore technology deeply, and also had to be evaluating things on a level beyond "it appeals to me for [insert highly subjective and debatable reason]". So I began building some references, and I'll neatly put them together here in what I might call a "foundational" order - the earlier a category, the more likely it a long-term reward structure which you can use to build knowledge upon at the cost of being less immediately relevant to what is happening in the moment.

I certainly didn't come to them this way. It was more like throwing everything into a pile and eventually reshaping the pile in a more structurally sound way when I realized it had grown beyond my comprehension.

If you look long enough into any type of internet recommended path to self-improvement, you are invariably going to come across someone who essentially says YOU MUST READ. I agree, and it is unequivocal. The other suggestions here are great, but the time, effort and energy that goes into publishing a book actually means something when it comes to drawing information and ideas from the content. Information on how to find the time or how to improve the quality of your reads is a different tact than I am going for here, so I am happy to leave it at this:

TL;DR: You have no choice. You have to read.

That being said, there is way more to being a part of the modern programming paradigm than 600 page tomes on Test Driven Development and the like (though they still remain critical). There are books about product development, books on UX, books on management theory, books on goal systems. This is all the stuff that becomes fundamental to the things that come later on in the list. Without this base, it increases the likelihood of some type of intellectual thrashing - not knowing which technologies to chase, trying to chase all of them, and eventually flaming out.

But where to find recommendations that separate the wheat from the proverbial chaff?

For the longest time, a reliable source of timely and relevant articles eluded me. Teammates would show up with some information about something that was new, or different, or cutting edge and I would be second (or third or fourth) to the party. Moving up in the organizational structure meant that I had to be a little further ahead in the knowledge queue. I had to be deciding whether said technology was relevant or even useful, and that requires time.

So someone was out in the universe, curating all these incredibly relevant and interesting articles into one place, so I no longer had to hunt them down piecemeal. And it was not just one person, and it was not just one subject. It was the multitude of subjects that had suddenly become incredibly relevant to my role. So I subscribed. And subscribed again. And subscribed some more. All until I had a jammed up mailbox and had little choice but to let go of some of them.

Here's a few that have survived my inbox test. My apologies if you have trouble finding the place to subscribe, some require a log in (dev.to comes to mind) in order to be added to a mailing list.

Ah. Yes. The insanity. The chaos which refuses to be tamed, spilling out into the universe unbridled and full of passion. Unless you care to click more than one or two times in the app and start creating lists. This is also something I picked up from a book called Play It Again written by the journalist Alan Rusbridger. It's also worth noting that this is another example of one category feeding a second

Lists + Tweetdeck? Yes! There were a couple things which didn't have twitter accounts, but had RSS feeds, and that took a little doing to capture their information in a twitter feed. Eventually I set up a new twitter account that would tweet out the latest RSS publishing using IFTTT, then added that account to the relevant Twitter list. This was a great way to stay on top of the more immediate, exciting stuff without having to chase things down. I mean, it's like the information is coming to ME the whole time. Revelatory, for sure. 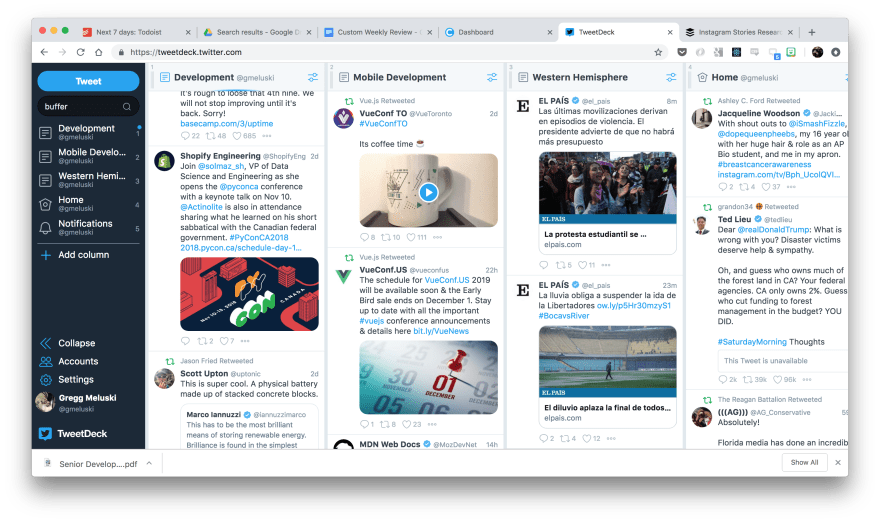 Also, I got into the habit of putting my lists to the left hand side of Tweetdeck, pushing my main timeline further and further into oblivion, where it belongs. Not because it's bad (though it can get bad based upon the events of the day or week), but because it is an almost infinite stream of engaging and sometimes enraging information. I like to follow smart, interesting, opinionated people. I like politics and governance, so you can see how consistently engaging with my timeline instead of my lists can take me away from what I need to be doing (learning about things relevant to my job, remember?). So yes, I have curated lists which dominate the left hand side of my screen.

When it comes to technologies, it pays to follow certain projects or major contributors to said projects. When it comes to development in general, I like to choose companies and people who are doing something I find interesting. If the business ideas are interesting, so chances are their product and technology ideas are interesting, or at least worthy of talking about. And ultimately that's what I am looking for out of this level.

How this SAAS founder learned to code by building companies himself

Do you chat with other developers often? What are your favorite communities to do so?

What is your favorite online code sandbox tool?

What are services offered better by AWS?

Trending on DEV
Exploring the Two Sum Interview Question in JavaScript
#career #javascript #interview #webdev
Time to give back.
#design #career
Work on your personal branding as a developer
#career #softskills #advice #beginners
What I wish, as a woman in tech, I knew early on?
#career #womenintech #motivation #developer
check out best CSS BUTTON HOVER EFFECTS
#career #webdev #python #javascript
Describe the best manager you've ever had
#discuss #career
How I learned to think fast and slow - the one book that improved my critical thinking
#career #productivity #habits #developerhabits
4 things you need to know if you want to be a developer
#career #beginners #motivation #webdev