As a data scientist or ML engineer, have you ever faced the inconvenience of experimenting with the model? When we train the model, the model file is generated. Now, if you want to experiment with some different parameters or data, generally people rename the existing model file and train the model again and this process goes on.

The final directory looks something as shown in the below figure 😁. The same thing goes with data as well. 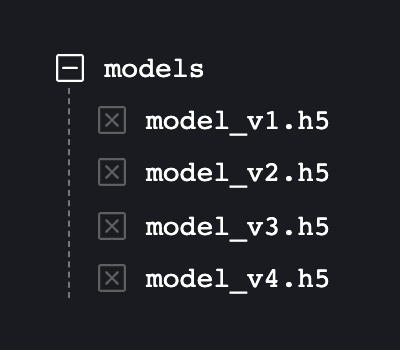 But if we talk about code, we don't have this problem there because we have Git to version the code. I mean that I can create a separate branch for changing some code to see its behaviour without altering the previous one. What if we can get a Git kind of versioning control system for data and model? Wouldn't that be amazing? Here comes the DVC (Data Version Control) which exactly does the thing which solves this problem. 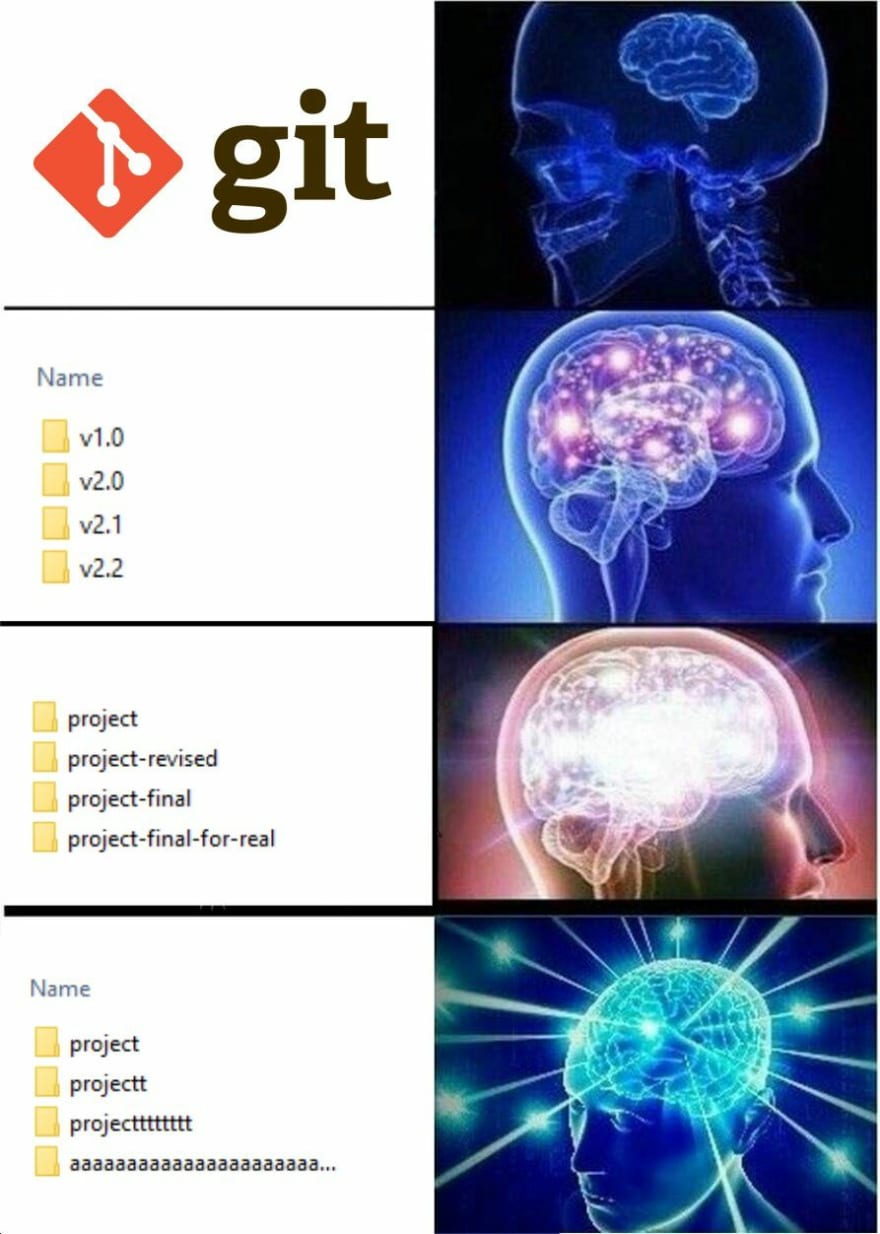 Although, DVC is much more than just data and model versioning. It also helps create end-to-end pipelines, capturing metrics related to pipelines and experimenting with ML models. But in this blog, we will see the data versioning aspect of DVC.

DVC can be used as a typical Python library and can be installed using package managers like pip or conda.

To install DVC using pip, you can execute below command in the python supported terminal.

To install DVC using conda, you need to execute below commands in conda terminal.

Apart from these conventional installation techniques, DVC can be installed in other different ways too as described here on the official documentation website.

Code versioning is not really a new thing for us because we use Git in our daily life but the problem with Git is it becomes extremely slow when the tracking file size is huge as 100 GB. That is where DVC comes in. Git tracks the changes in code whereas DVC tracks the changes in data as well as models.

The foundation of DVC consists of a few commands you can run along with Git to track large files, directories, or ML model files. In short, you can call DVC "Git for data".

Let us understand data versioning by dvc using a simple demo project. Let us assume that we want to create an end-to-end pipeline to prepare, train and evaluate the MNIST dataset and we have code as well as data available and structured as shown in the below figure. 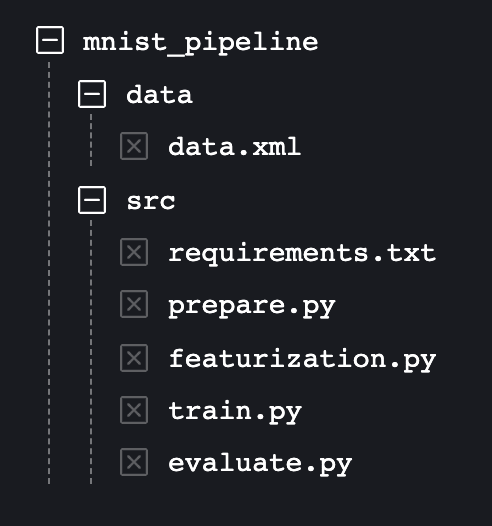 This command will create a new directory .dvc just like git init creates .git directory. Two files .gitignore and config will be generated in .dvc directory. Now, we have successfully initialized this as DVC repository.

In Git, if we want it to track the changes in the code, we run a git add command which adds the code changes in the local repository. DVC has a similar command as shown below to start tracking the data files.

Note here that a dvc add command accepts arguments which are data or model file names that you want DVC to track. All the filenames must be space-separated.

By executing this command, DVC will create two files data/data.xml.dvc and data/.gitignore.

It means that it forces Git not to track original data.xml file which is expected because the tracking of data.xml is now responsibility of DVC and not Git.

All files ending with extension .dvc are special files which contains the information about where the actual data files will be stored and cached. If you take a look at data/data.xml.dvc, it just stores an MD5 signature as shown below.

Once we do this, the directory structure for MNIST pipeline project looks something like this. 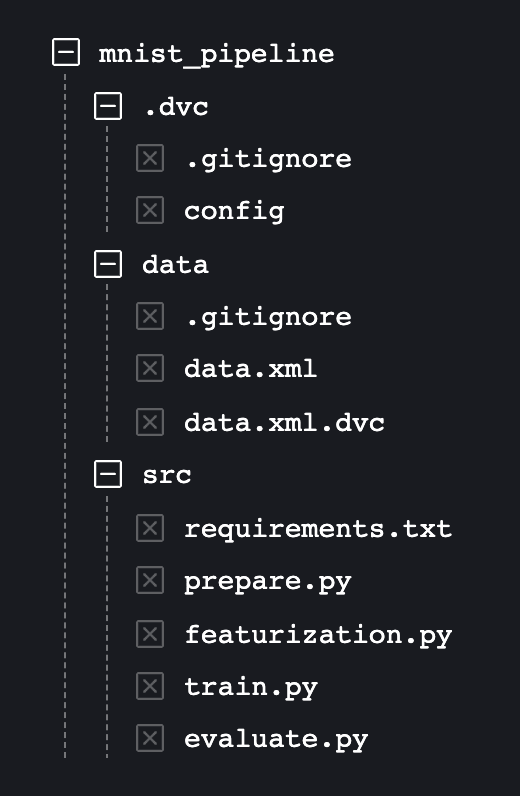 The actual data files (which are not tracked by Git) will be stored in any kind of file system which can also be called DVC repository. File system for DVC repository can be AWS S3 bucket, Google Drive, Google storage bucket, Azure storage, Object Storage Service or any custom created file system. Depending on where you will store the data, you will need to install external dependencies like dvc-s3, dvc-azure, dvc-gdrive, dvc-gs, dvc-oss, dvc-ssh. You can know more about installation here on the documentation website.

To push the data files in DVC repository, first we need to configure the remote origin of the repository where the data will be stored. We can do that using below commands.

dvc remote add command adds the remote origin of the DVC repository where the data will be stored. Executing this command will actually add this origin information in .dvc/config file which Git tracks. That is why we also need to commit the changes done in .dvc/config file as well.

It pushes all the data and model files on which dvc add command is applied. 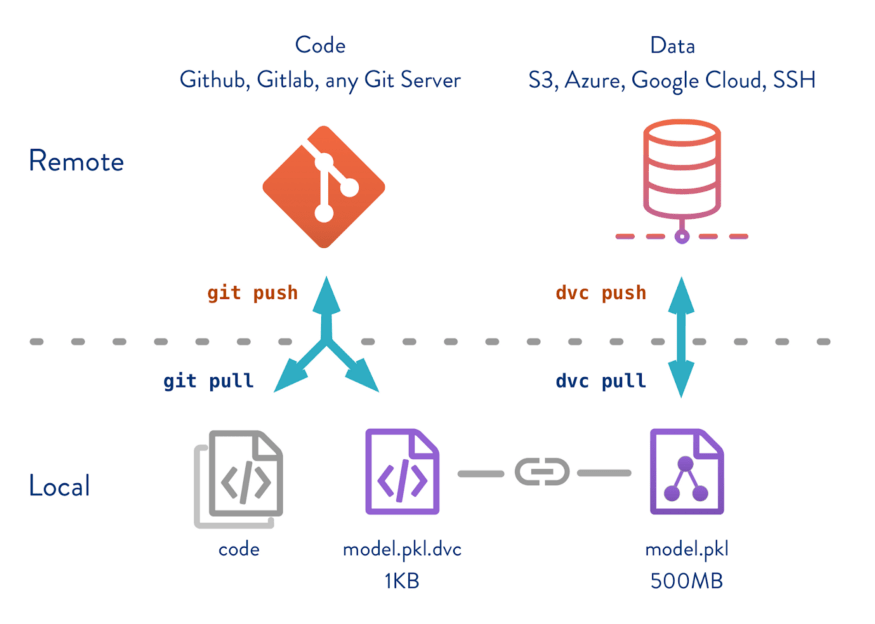 There is a reason behind dvc remote add stores remote origin information in .dvc/config. It does so because when next time somebody clones this Git repository, It will not have any data. It will only have MD5 signature of the data in corresponding .dvc file and it will also have DVC remote repository location information stored in .dvc/config file. So, the complete data can be pulled using below command:

It pulls all the data and model files stored in DVC remote repository.

DVC is so flexible that you can use command dvc exp run to run the complete pipeline with just single command. The command is not only limited to this.

If you want to run your experiments with different parameters, you can mention the values of the parameters which are defined in params.yaml as shown below.

Note here that whenever you run the experiments using the above command, DVC caches the output so well that it will only run those states which are affected by the parameters. Moreover, if you think one of the stages in the pipeline are too much time consuming and you want to checkpoint it so that in case the program crashes, it can resume from where it crashed, you can define checkpoint: true in the output of that stage in dvc.yaml file and it will keep checkpointing your results for you.

Alternatively, you can also commit different experiments in different branches just by switching the branches as described below.

As we already understand switching between different versions of code by changing Git branch. Similarly, we can also change the version of the data as well.

As described in the beginning of this blog, we don't need to keep multiple copies of model files anymore and keep renaming them. Now, we can have single model file which can be versioned using DVC during experimentation. Below image explains the same. 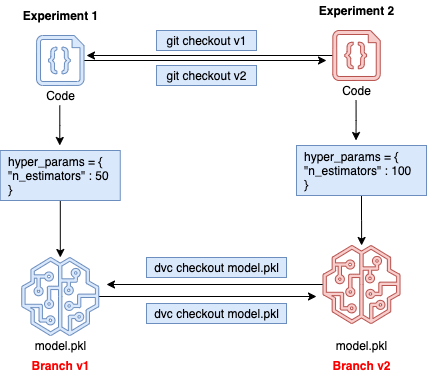 When the dataset is too large, we need very efficient mechanism in terms of space and performance to share different versions of data. That is why it is suggested to store the data in shared volume or on an external system. DVC supports both of these mechanisms as described below.

With this, I hope you were able to get a quick overview of how DVC does data versioning. DVC also has features to streamline ML reproducibility and support cloud provisioning through cloud providers. This would come in handy for the entire MLOps community as now they could interact with each other without worrying about monolithic tools.

If you like to know more about how to do it and get your hands dirty, the documentations are a great way to start.

If you prefer videos then they have a youtube channel with detailed tutorials!

How to Clean Data Using Pandas

What is YOLOv3 model?

Once suspended, hrittikhere will not be able to comment or publish posts until their suspension is removed.

Once unsuspended, hrittikhere will be able to comment and publish posts again.

Once unpublished, all posts by hrittikhere will become hidden and only accessible to themselves.

If hrittikhere is not suspended, they can still re-publish their posts from their dashboard.

Once unpublished, this post will become invisible to the public and only accessible to Hrittik Roy.

Thanks for keeping DEV Community safe. Here is what you can do to flag hrittikhere:

Unflagging hrittikhere will restore default visibility to their posts.