For the past 10 years, the HTTP Archive has tracked the evolution of the web by archiving the technical details of desktop and mobile homepages. During its early years, the Alexa top million dataset (which was publicly available until 2017) was used to source the list of URLs included in the archive and the number of sites tracked increased from 16K to almost 500K as testing capacity increased. To keep the archive current and include new sites, towards the end of 2018 we started using the Chrome User Experience Report as a source of the URLs to track.

Throughout 2019 the size of the HTTP Archive dataset was mostly constant. However, the sample size has grown quite a bit in 2020 as you can see in the graph below! Additionally, if we combine both desktop and mobile URLs, there was a recent peak of 7.5 million sites! 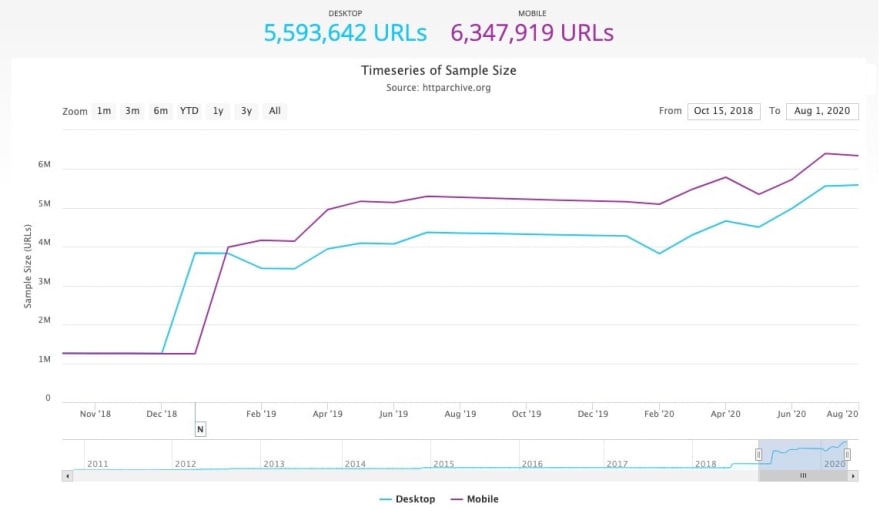 How are sites Included in the Chrome User Experience Report

You can read more about CrUX on Google’s Developer website, as well as this informative blog post from Rick Viscomi. I’ve also written about it previously here.

While Google doesn’t publish a definitive list on what it takes to be included in the Chrome User Experience Report dataset, they have indicated that:

Essentially, a website’s inclusion in the Chrome User Experience Report indicates that they’ve reached a certain threshold of activity. According to the CrUX changelog, there have been no changes in the methodology. So it can be inferred that analyzing the number of websites included in this dataset should provide some interesting insights into the month on month growth of the number of websites being visited by real users.

Note: The Chrome User Experience Report does not contain traffic details, and as such this analysis should not be interpreted as growth of traffic on the internet. This analysis is specifically about the growth in the number of websites that people are visiting.

Global Growth of Origins Accessed in 2020

The graph below illustrates the total number of websites that the Chrome User Experience reported across all form factors during the previous 12 months. There are a few interesting observations we can make: 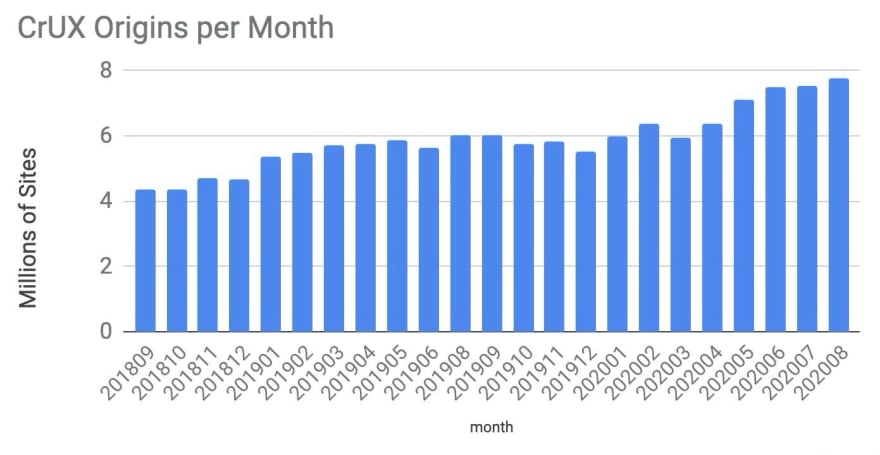 There is a similar pattern with the total number of registered domains. This indicates that much of the growth is new domains and not necessarily subdomains of existing domains. 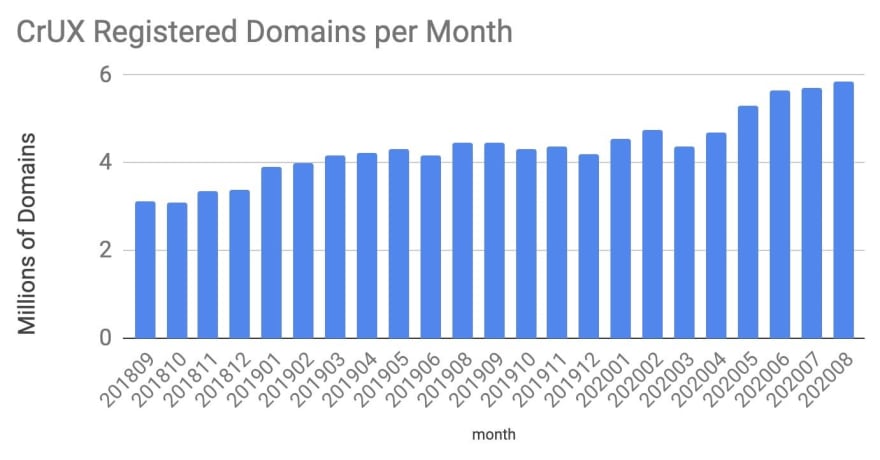 When we look at the month over month rate of change, you can see that the max change in 2019 was +/- 5%. The number of sites tends to fluctuate month to month. For example, between August and December 2019 there was an 8.6% decrease in sites. However at the start of 2020 there was a 7.5% increase.

When comparing the number origins between December 2019 and August 2020, the total number of origins increased by 28.9% this year alone! That’s huge!

Looking at this by device type, we can see that there are consistently more mobile websites compared to desktop websites. And over the past year the fluctuations between them have been fairly consistent. The one exception is between May 2020 and June 2020, where desktop increased by 0.7% and mobile increased by 6.2%. 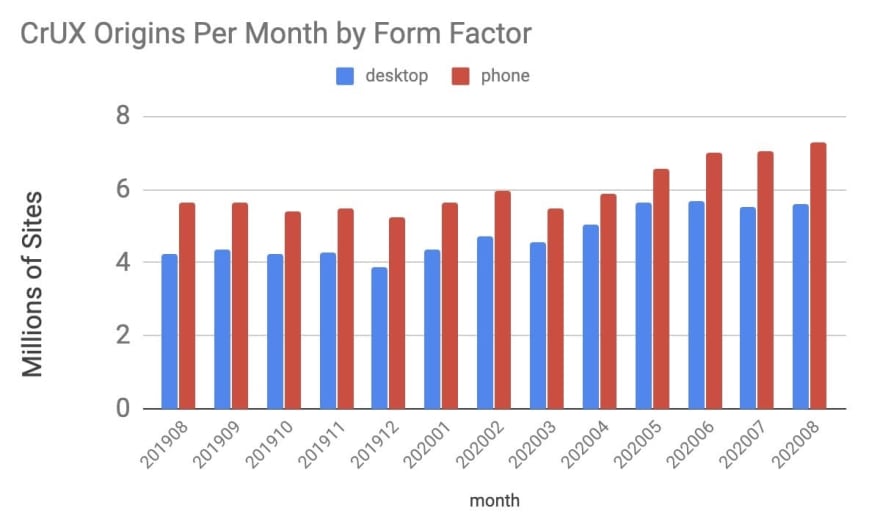 Is there something about the mobile experience (such as social media links, email marketing, etc) that increases the change a user may navigate to an unfamiliar website?

Or could it be growth in regions where mobile is more dominant?

How Has this Varied by Region?

At the start of 2020, most regions of the world saw an increase in the domain of sites. The exception to this was western Asia. The regions that had the most substantial increase at the start of the year were Northern Europe, North America and South America.

Between May and June there was another large uptick in the number of sites. This appeared to be mostly South-East Asian and Western European countries

The tables below detail the number of sites included in the CrUX dataset during December 2019 as well as January, May and June 2020. This first table contains the top 10 regions, most of which saw an increase of 15% to 25% during the previous six months!

Looking at the next 10 in the list, we can see significant growth in Central America, Australia as well as West, Southern and South Africa. Overall the regions with the most growth during the 7 month period was Australia and New Zealand, South America, and Central America.

Many of the regions that had an increase in sites visited (based on CrUX data), also have a high percentage of mobile visitors compared to the global population (based on statcounter). So while it’s difficult to say for certain, it’s entirely possible that location is a large factor in the gap between Desktop and Mobile. 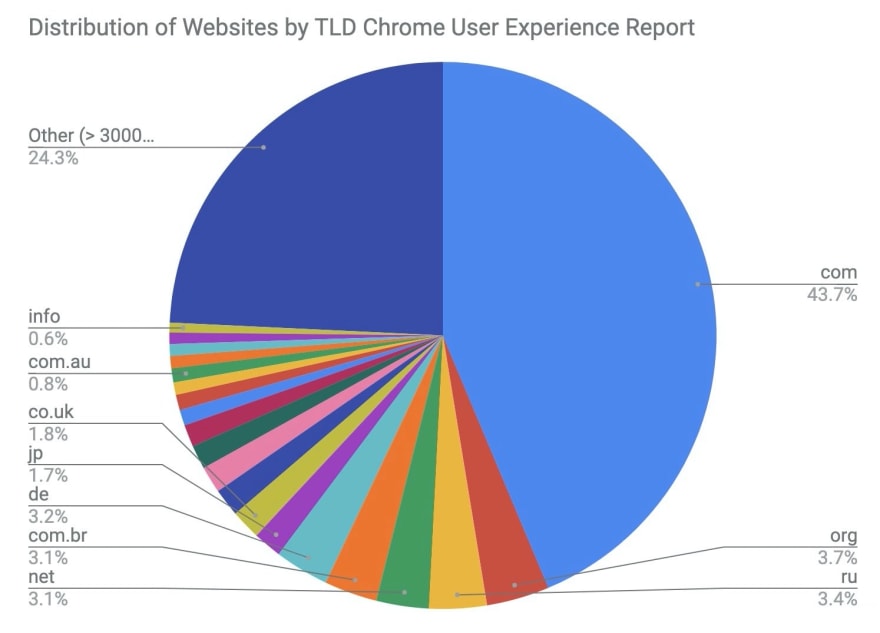 Most of these top level domains experienced a > 20% growth in active websites since December 2019, with the exception of .info and .net. The domains with the largest percentage growth were co.uk, com.au and de. 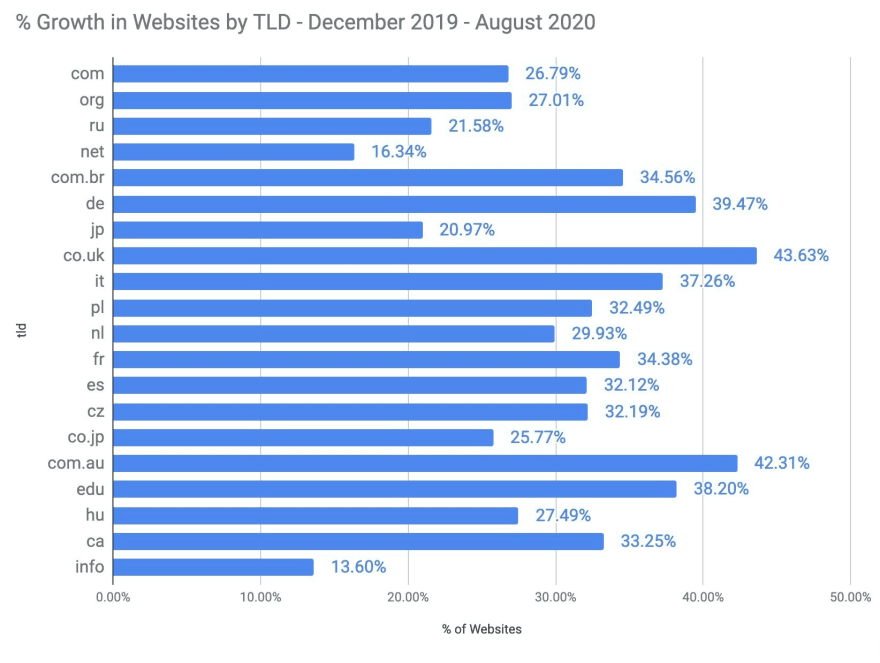 If we look at the month to month growth trends for these TLDs, we can make a few interesting observations: 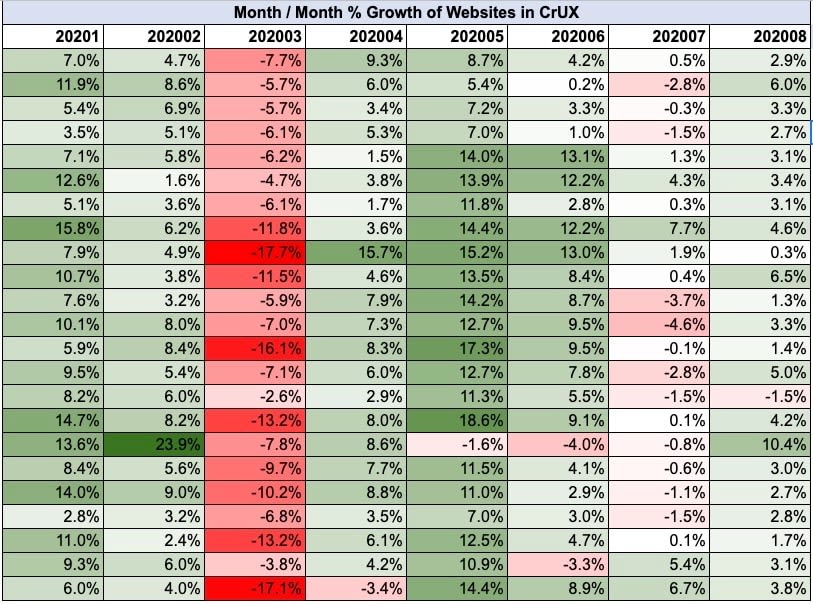 The web is constantly growing and evolving, and clearly it’s rate of growth can vary quite a bit. During this analysis we explored a public dataset that Google provides to show how the web has grown during 2020, and which regions are growing the most. While this doesn’t speak to the traffic levels experienced in these locations, the number of websites can be used as a proxy for understanding usage of the web. As this analysis shows, 2020 has been a year of substantial global growth for the web.

If you are interested in seeing some of the SQL queries and raw data used in this analysis, I’ve created a post with all the details in the HTTP Archive discussion forums. You can also see all the data used for these graphs in this Google Sheet.

Current state of wasm with rust using an example

Split your Webpacker bundles to speed up the web