If you might not know, I have made a discord bot Gmbot - Multiplayer Game bot for Discord (itsnikhil.github.io). The way how this bot used to function was very simple, there was a trigger phrase gmbot followed by command name like createwar and some parameters

I have already written a detailed post showcasing it's various features, database schema, etc. which you can read at Gmbot - Chatbot for gamers (itsnikhil.codes). I made that bot in python as discord.py API wrapper library was written in python and I was comfortable working in that language. Like everyone, I followed whatever tutorials, documentation, etc. were available online. But today in this post I want to talk about something which I did not give much thought at the time when I started working on gmbot in 2019.

Everything was very monolithic

What I meant with monolithic is that all the functionality existed in a single codebase, everything I wanted to do had to be done in python. Even though the project was well structured into classes, easy to read/understand code and a common pattern was followed for creating each command but it was not testable, not scalable and not flexible. All the business logic was mixed within the command handler.

Can we do better? Micro-services

By micro-services I do not mean having different bots handling different features of the bot. I want you to think and treat discord bot server as simply a frontend-client like a mobile app and instead of mixing business logic into it, have a separate backend server communicating via RESTful APIs.

With this architecture commands like above will be passed to chatbot frontend-client which can then make a POST request to to backend with the params in the body and client key in headers indicating this is a record from discord. 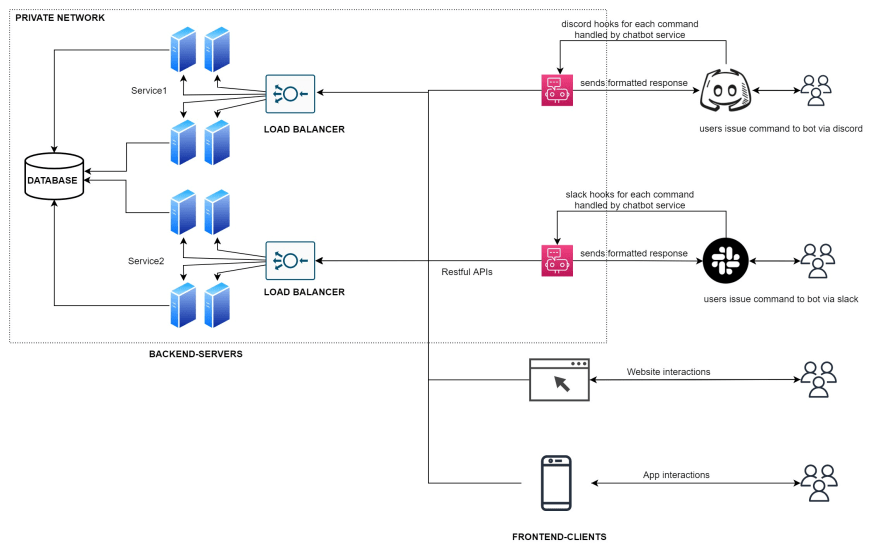 Much easier to test the features

We have been developing backend services for many years now and have developed complex observability tools which can even tell which API request took how much time for a particular database query in real-time. Of course we have proper tooling to test and automate backend servers with proper CI/CD process. Without separate backend there is no good way to test discord/slack bots besides testing manually. If you would search for testing in discord.py official docs Search (discordpy.readthedocs.io) you will be out of luck.

If you create a chatbot for discord, you have to accept the fact that you are limiting your audience group to that matching discord's. Sketch design tool restricted itself to only support MacOS while Figma was web based open-to-all because of which Figma easily captured the market however good Sketch was in it's comparison. Let's say you developed an attendance bot and you want to support both slack and teams, backend can still be shared while clients can vary since core business logic is same across bots/ webapp. This is something I regret not doing for gmbot, when gmbot failed, I could not pivot my idea into a mobile app easily. Having this opportunity is very important for a lean startup which can require pivoting business into different direction any day.

Backend servers can be horizontally scaled

Let's say your chatbot got famous, everyone is talking about it, your product is in the headlines everywhere <3. There will be a flood of new users trying to use your service. According to some random folks on internet, 1 server can handle ~2500 active discord groups load. This can obviously vary based on your server resources and what actions your bot perform. Fortunately, discord.js bot support sharding Getting started | Discord.js Guide (discordjs.guide) but I would argue, it is much better to scale backend horizontally by running multiple instances of server behind application load balancers, using in-memory caches, etc. these are webservers in the end, you don't have to depend on discord to provide a way to scale.

Flexibility to experiment and optimize

Adding/Removing features becomes much easier, you can setup multiple environments like production and development allowing you to safely work on experimental features without affecting actual customers or their data. You can also work on optimizations behind the scenes without touching the frontend-client

Freedom to try out new technology

Freedom to use different technologies without getting locked to any single programming language. Business logic can be written in golang with it's high performance benefits from compiled binary and goroutines while still using discord's JavaScript library in frontend-client to communicate with discord. If something better comes along, you have the ability to try it out. You can have different parts of the service handled by different microservices.

Each microservice has separate codebase which can be updated independently of other services. Microservices plays really well with continuous integration and continuous delivery by providing ability to have different deployment pipelines.

Micro-service codebases are smaller in size and thus much faster to build, test and release. One do not depend on other to make a release after which you can release yours. We can have people work on domains/areas where they have expertise. Not being forced to collaborate with everyone let's developers focus on their tasks and increase productivity.

5 Common Software Architecture Patterns. When Should You Apply Them?

Nikhil Taneja
I am a programmer interested in all sorts of technology. I like working on open source projects, gaming, etc.
How do you motivate yourself to write when so few are reading it?
#discuss #watercooler #meta
Meme Monday 👁
#jokes #watercooler #discuss
CHALLENGE: Describe AI in five words or less.
#discuss #ai #watercooler

Once suspended, itsnikhil will not be able to comment or publish posts until their suspension is removed.

Once unsuspended, itsnikhil will be able to comment and publish posts again.

Once unpublished, all posts by itsnikhil will become hidden and only accessible to themselves.

If itsnikhil is not suspended, they can still re-publish their posts from their dashboard.

Once unpublished, this post will become invisible to the public and only accessible to Nikhil Taneja.

Thanks for keeping DEV Community 👩‍💻👨‍💻 safe. Here is what you can do to flag itsnikhil:

Unflagging itsnikhil will restore default visibility to their posts.