Machine Learning is a super cool way to build AI apps - but I won't lie, it is a lot of math. Luckily, thanks to ml5.js - we don't need to spend months understanding ML, we can apply it and develop some cool uses in our app within just a few hours 😄

This is a guide to build a feature extractor - something that can get a video stream from your webcam and predict what it sees, once it is trained with a little bit of data - just like in the video above!

I don't want to waste too much of your time with the frontend I used for this app - I think it'd be much better if I skipped right to the JavaScript, and logic.

You should fork this repl - https://repl.it/@jajoosam/feature-extractor-start - so that you have the HTML already there! It's essentially just a few divs for holding the video and some other text, along with some buttons to control our app!

I've commented everything (except the CSS 😛) - so you should be able to go through the frontend and understand the basic layout of the app in a few minutes. Once you're done, head over to script.js 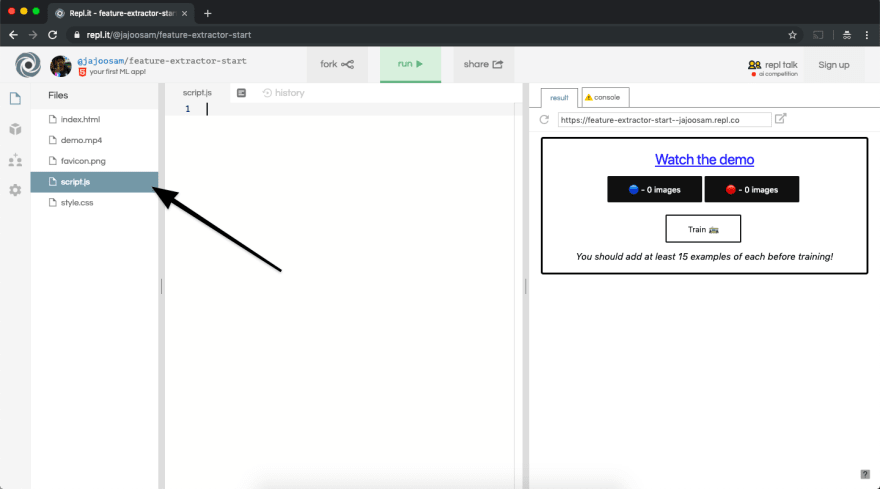 Our app is going to have a lot of functions, and it's important that all of them can access the variables - which is why we shall declare right at the start of our code

I'll give you an overview of what these are for, but you'll understand them much better as we continue building our app.

featureExtractor and classifier are variables we're going to store and initialize machine learning models in.

video is where we're storing the webcam stream, while loss lets us know the progress of how far our on feature extractor has been trained.

Finally, blueCount and redCount are counters for how many images there are in each category - and we initalize both of them with a value of 0, in the next line.

setup() is a function which shall fire up as soon as our code is ready to run. Bacause of using p5.js, our code is pretty readable and easy to understand here.

This code goes in your script.js file right after you declare variables - essentially, it gets a video stream and displays it on our page, inside a div with the ID video. We also make some functions using the ml5.js library here, and pass the captured video as a parameter - you'll see what we do with these soon, but there's still a little more setup left!

As you can see, at the end of setup(), we call setupButtons() - the function we're going to make next. Here, we're adding event listeners to buttons in our HTML - so we can run functions when they're clicked.

Here's all the code we write for the setupButtons() function 👇

That's the largest art of our app, and I'm going to break it up into several parts to make it easier to explain!

Let's start off with this block:

buttonA and buttonB are nothing but the two different buttons we have in our app!

With .mousePressed() we're defining what happens when any of these buttons are pressed - which is:

Next up, we have this whole block - where we train the classifer itself:

When the Train 🚋 button on our app is pressed, we call classifier.train() - and with each iteration, the function we supply there is called - which is why we see the Loss value keep changing.

When the Loss value is 0, then we hid the Train 🚋 button, and show the previously hidden Predict 🔮 button!

The last 2 lines of the setupButtons() function are about the predict button:

It seems like we're calling this classify function - which is what we're going to build next!

Our classifier() function is pretty straightforward - this is all we do:

We're just telling the ml5 classifier to classify the current frame in either of the categories (🔴 or 🔵), and send the results to the gotResults function - which brings us to the final part of our app!

As long as the classifier doesn't send us an error, we change the entire page's background color to either red or blue - and then call classify() again, which keeps our code running forever, and the predictions keep coming!

That's all the code we have to write to build the example feature extractor. I highly recommend going through the final code so that you can see how everything fits together well - I know there are quite a few functions too keep track of, but I've commented everything to make it easier 😅

Now go ahead, try it out! Here are some things I did to see if the feature extractor would work (it did!) 👇

Let me know other cool things it worked with 👀

✨ okay, but what do I MAKE with this?

There are SOOOOO MANY THINGS you could do! A feature extractor gives you the ability to add this whole other, mysterious way of controlling, and getting input in your app!

Here are a few ideas 💡

ml5.js can do crazy things! You can integrate image classification into your own app like I did, find similar words which fit into a text, get a precise skeleton of human bodies and even transfer the styles in images - look at what my picture looks like, when composed with the style of a cool painting 🖌️

You should take a look at the many examples on the ml5.js website - or take a look at Dan Shiffman's videos on ml5.js, he covers loads of things you can do with it - and explains everything with a ton of energy. I highly recommend watching his videos on the Coding Train YouTube!

If you have any questions, feel free to ping me on twitter, or leave something in the comments :)

Samarth Jajoo
17yo maker of things 🛠️
Should developers study 20 hours a week after work?
#career
Things you can do with your Browser developer console
#webdev #javascript #debug #programming
Speed up your code with Promise.all
#javascript #performance #webdev

Once suspended, jajoosam will not be able to comment or publish posts until their suspension is removed.

Once unsuspended, jajoosam will be able to comment and publish posts again.

Once unpublished, all posts by jajoosam will become hidden and only accessible to themselves.

If jajoosam is not suspended, they can still re-publish their posts from their dashboard.

Once unpublished, this post will become invisible to the public and only accessible to Samarth Jajoo.

Thanks for keeping DEV Community 👩‍💻👨‍💻 safe. Here is what you can do to flag jajoosam:

Unflagging jajoosam will restore default visibility to their posts.