I decided to go at the last minute, when Progress Software graciously gave me a free ticket (thank you!). Progress was putting on its first jsMobileConf, a two-day, two-track event in Boston. Great speakers, great topics, perfect! I arrived on the first day right before the break - I'm here to learn and meet people and get some job hunt ideas. I have skills, drive, aptitude and a portfolio, but something is missing. I got my badge and a small plate of cut fruit. 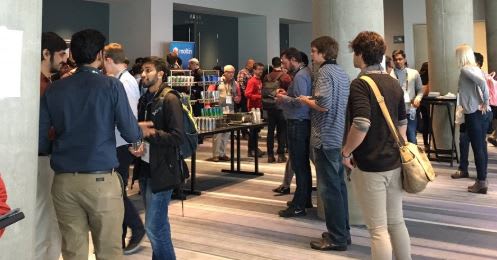 There I am, conferencing! Photo courtesy of Cynthia Maxwell @ Progress

I approached a couple of devs and said "Hi". They were from a company that makes software for autism education, and which sponsored happy hour later that evening. I told them what I had been up to in trying to become a developer. We were then joined by a dev who had done some contract work. He suggested I look into same to get some experience, and that I pick something like React and focus on it to get a job, versus my current cover-the-waterfront approach, wherein I've been moving on to new things as much as possible.

Time for some pre-lunch talks! I went to one on binary data in JavaScript. Now, we all know our 1s and 0s, but here we broke down the code that makes up a GIF! Pretty neat! Binary also has some advantages over JSON (serialization speed/size) that can make it a better choice sometimes. Sweet!

Next was a talk about NativeScript, with which you can build native mobile apps using JavaScript. I thought it was so cool I will learn it (and Angular and TypeScript) for my next project. I already have an idea. So I guess that third or fourth React project will have to wait😢. I skipped lunch to take a walk. Don't skip lunch.

The next talk was on webpack and Hot Module Replacement (HMR). Not Reload, REPLACEMENT. This was emphasized😊. I just refactored my portfolio site with webpack, but I used dev-server and not HMR. I didn't have any state to maintain over dev cycles, but if you do, HMR is the way to go. Unless you're using Angular, apparently they don't get along right now (Vue and plain JS are ok). This is being worked on. Anyway, a good and entertaining presentation.

After that was a talk on imposter syndrome. As the (presumably) only attendee without his first dev job, I felt like the ultimate imposter. So this talk was very helpful. It helped me relax a bit and as it would turn out, everybody I talked to was very nice and I felt like I could hold my own with them on the tech topics we discussed. I do know things!

Break time! I think this was when the popcorn came out, which was a great call. Remember, I had skipped lunch. Anyway, I met a consultant and told him about my situation and he felt, with all I have done in my portfolio, the issue might be more about my inability to sell myself rather than my skills and aptitude and drive. He suggested I get some résumé help which I intend to do. If anybody wants to take a look, please let me know!

The final talks of the day were on offline apps and contributing to open-source software (OSS). I have had half a dozen or so PRs accepted, but they're mostly for small stuff like typos, along with some docs and a minor website update. But big or small, OSS is a great way to get involved!

The next day had some interesting sessions: AI chatbots (via NativeChat) and microapps (small programs lazily-loaded on demand inside a container app) in the morning, and in the afternoon a Node.js review, machine-driven refactoring (with ASTs) and machine learning for mobile, where the speaker trained a model on Azure and then used it in his app. Not bad!

At lunch I spoke at length with a dev who reminded me to stick with job hunting, even when it seems like a waste of time to be applying and getting nowhere. I admit I probably stopped looking too soon after passing the CFA exam; I just could not understand why I wasn't getting anywhere. But he said that's just how it is; you have to persevere until you win. It was a great lesson for me.

So after all these presentations and speaking with so many people, I came away from jsMobileConf with a plan: get some résumé help, don't give up, and of course, CODE!!! Thank you, Progress!!!😁

Demystifying Methods and Functions in C# - When should I use them?