This is the final post in my series on how I created the various visualizations in my Visual Studio Code 2020 Year in Review. In this post I cover how I recreated the final visualization type from Nicholas Felton’s 2013 Annual Report, the “volume chart,” shown below.

This stacked set of charts breaks down each type of interaction and displays the aggregated volumes of those interactions by hour (y-axis) for each week in the year (x-axis). There is a histogram at the top of the visualization that provides summary context for the hourly measures below. Finally, a yellow highlight color represents the top 25% of volume measures for that type.

Before all of that, however, the data needed to be loaded.

As I previously mentioned, all of the data used to create this visualization was obtained via queries to the ClickHouse GitHub archive that they have generously made available to the public.

I used the following query to aggregate event counts by week and hour, and then save the data into a JSON file for use in this visualization.

This query produces a JSON file that has two top-level entries, meta and data. The data entry contains the query results, and is what needs to be processed to create usable data for visualization. It looks like this:

You can see that the original row that contained a column for every event has been “unrolled” into three rows, and the type of event is itself now a column. This type of format, where every observation is represented as a row in the dataset, is often referred to as “tidy” data. It was first described in Tidy Data, by Hadley Wickham, and has since become a popular way of preparing/structuring data for analysis within the data science community.

As more and more teams have been working with tidy data, a number of tools/libraries that simplify the process of “tidying” data have been developed. For TypeScript, I’ve been using a library called Arquero (developed by the folks at the UW Interactive Data Lab), and I’ve been really pleased with it so far.

Tidying the Data with D3 and Arquero

To get things rolling, the data needs to be loaded from the JSON file into memory. I used d3.json to load the JSON data from its file on disk, and then ran a series of data transformations on the data using Arquero to get it into the format I described above.

In line 8 I extend the standard Arquero operators so that I can use the d3.timeParse function instead of relying on the wonky default Javascript Date constructor that Arquero uses internally (and warns you about).

Lines 11-20 actually transform the data. Line 12 converts the JSON array into the Arquero table format, and lines 13-15 use the fold verb to convert column names and values into rows.

Once that’s done, lines 16-19 convert strings to integers or dates, with line 18 using the d3_parse_date custom operator that was defined above, and the cleanup is complete.

In Svelte, you can await the result of an asynchronous call using the #await construct.2 This makes it easy to retrieve the data asynchronously directly in the markup, like so:

With that done, it was time to start building the weekly summary component.

This histogram is a slightly modified version of the two histograms that I described in earlier posts. The new element in this version is the addition of a vertical dashed line indicating the month boundary.

A bisector function is used to search a sorted array for the location at which a new value should be inserted to keep all array values properly sorted. This search takes advantage of the sorted nature of the array and uses a binary search to find the insertion point, which is very efficient as the number of entries being searched increases.

Here’s how it’s put into action:

Provided with any date, findHeightAtDate will provide the height of the histogram at that date. This can then be used to draw the dashed line that corresponds to the start of each month:

which results in this:

That is quite close, but there’s a problem. The start of March happens to coincide with the transition element between histogram measurements, and as a result the dashed line extends above transition line. This problem is one of my own devising. 😬

I decided that the easiest thing to do3 was to try to figure out a heuristic that would allow me to figure out when I needed to blend two histogram measurements together. In this case, the week boundaries are all on Sundays, so I was able to simply calculate an average measurement for any month that started on a Sunday.

This result was good enough for me. 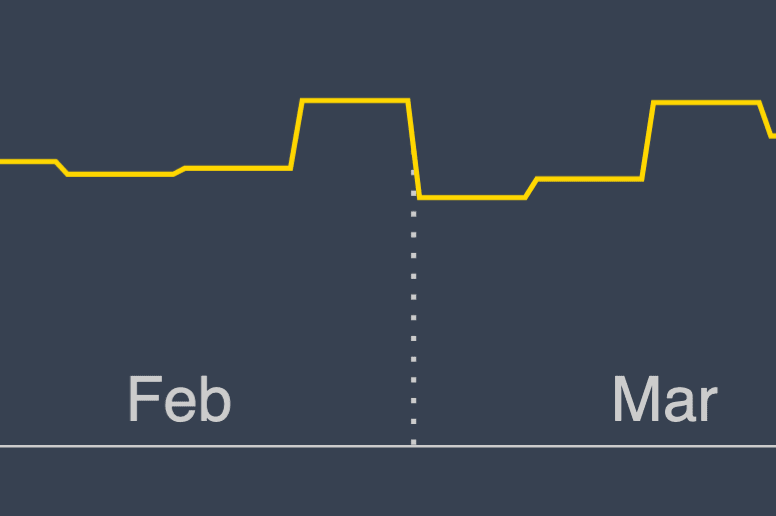 On to the volume visualization component.

It turns out that the HourlyVolume component was a very straightforward application of several d3 scales. In the end this visualization required five separate scales, each of which was responsible for mapping a certain aspect of the volume measurement to its visual representation. These included:

I’ve covered how to create xScale and yScale scales in previous posts, so I’ll move straight to the radiusScale.

When using a filled circle to visually represent a quantity, it’s important not to overstate amounts accidentally. With a circular representation this is easy to do because the area of a circle varies as the square of the radius. To address this, when using a filled circle the scale for the radius should use d3.scaleSqrt, which will scale a value according to the square root of the parameter.

I also wanted to ensure that outliers in the aggregated data didn’t end up overwhelming or obscuring parts of the the volume visualization. The easiest way to do that is to calculate a value that represents the high end of the collection of measurements without outliers, and use that instead of the maximum value. One way to do this is to calculate the 99th percentile for the dataset and use that as the maximum value for the domain of the scale. This can be done using d3.quantile.

Finally, once the scale has been created, the clamp function can be used to ensure that values that fall outside of the specified domain are clamped to the extents of the domain. This ensures that the largest radius the scale will generate is the one that is specified with maxRadius.

💡 Note: I typically put a set of constant declarations for these types of fine-tuning variables at the top of my components, so that I can tweak them as necessary based on the data I’m actively trying to visualize.

Finally, in the original volume chart all aggregate values that were in the busiest 25% of activity were colored yellow, whereas in my VS Code visualization only the busiest 20% were highlighted. Both of these can be easily implemented via d3.scaleThreshold. This scale type transforms a domain into sections based on specified thresholds, which makes it perfect for performing the described color mapping.

(Both normalColor and highlightColor are Svelte component properties and are passed in from the parent component.)

The opacityScale is the same, except that it maps to two opacity values instead of colors.

Once all of these elements are in place, the actual drawing of the volume chart is pretty minimal:

where getHoursForWeek is defined as the following, because apparently you can’t compare Date objects for equality. Joy!

Once this is all in place, the final version of the volume chart looks like this:

The code I used to write this post is available on GitHub.

If you have any feedback, please let me know on Twitter or feel free to contact me here.

Guidance of how React works

5 VSCode Features I Use Daily as a Full Stack Engineer

A Look at Compilation in JavaScript Frameworks